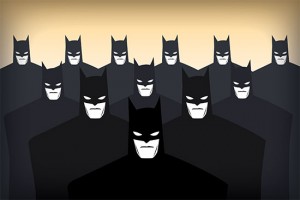 Batman is The. Greatest. Superhero. Of. All. Time.

This is one of those arguments that comic geeks love, because, on the surface, it’s about costumes and gadgets and super powers. But the heart of this argument is the timeless theme: Humanity’s triumph.

The Dark Knight has been engaged in the greatest renaissance of his storied career, bookended by Frank Miller at one end and Chris Nolan on the other.

Last month’s horrific Aurora shooting, for some, has put a smudge on that cellulose, though. Some people have associated the cape and cowl with this horror, when it should be the exact opposite. Batman is the perfect symbol for us to memorialize this moment.

Batman has always been about turning tragedy into triumph. Bruce Wayne grew up determined to prevent the kind of tragedy that befell him from destroying other people’s lives. His inspiration was his own pain, and his humanity is his greatest asset.

If you take away The Hulk’s gamma radiation, Superman’s powers, Spider-Man’s radioactive spider bite, you’re left with ordinary people. If you take away Batman’s cowl and gadgets, you still have Batman. As a child, I knew I was never going to grow up to be an alien from the planet Krypton. I almost killed myself trying to get bitten by radioactive spiders. I thought if I hung out near the microwave, maybe I’d get Hulkified. But in the end, the only hero to whom I could truly aspire was Batman. If I worked hard enough, if I studied hard enough, one day, I could don that cape and cowl and roam the city’s rooftops, weeding out evil and protecting the innocent. It’s precisely this fact—that Batman is nothing more than humanity at its peak—that is why he should serve as a source of inspiration for all of us now.

Yet heroes are born amidst tragedy. You can’t have one without the other. We’ve already heard stories of people throwing their bodies in front of bullets to protect their families. First responders and charitable organizations all over the map are standing tall.

On a dark night in Aurora, one deranged monster felled an entire community of people. But the number of heroes born at that same moment hasn’t been counted yet. As the gas cloud dissipates and the blood is washed away and the tears stop falling…

DenverMind Media, a local PR and site design firm for non-profits, is selling their Aurora Rises design T-Shirts, pins and hats. All profits collected will be donated to the Colorado Organization for Victim’s Assistance (www.coloradocrimevictims.org/). To buy your shirt, head to cafepress.com/denvermindmediacolorado.