The Month in Review 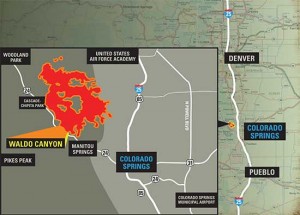 The Waldo Canyon Fire in Colorado Springs was the worst in the state’s history, destroying 248 homes and killing two; investigators still don’t know the cause. June was the hottest month on record in Colorado and the first six months of 2012 were the hottest on record in the United States. Lack of rain and fear of wildfires led to fireworks bans across the state, but Erie still allowed fireworks sales to continue. West Nile was found in Longmont, the Boulder Reservoir was closed due to high bacteria levels and the Boulder County trustee was one of 10 who resigned over allegations of misspending public funds. CU-Boulder had the twin distinctions of being name among the top 200 universities in the world and among the top 10 party schools of the past decade. A Longmont cop survived being struck by lightening. Both Mitt Romney and Barack Obama toured the state, reaffirming its battleground status; Romney walked away with $2.5 million after a fundraiser in Aspen. The Longmont Police Department opened its shooting range to the public, an explosion at Erie Middle School collapsed part of the roof and injured three workers, and a former Boulder detective self-published a book laying out his theory that JonBenet Ramsey was not killed by an intruder. A gunman killed 12 people and injured 58 at the midnight premiere of The Dark Knight Rises in an Aurora movie theater.