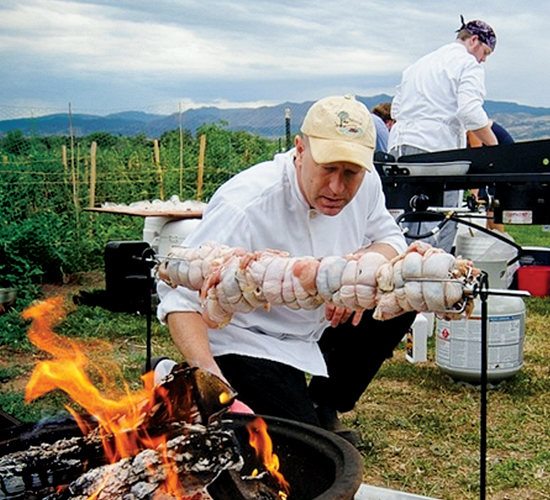 Two new restaurants in Westminster: Early Bird Restaurant opened in Westminster for breakfast and lunch in the Bradburn neighborhood and Kachina Southwestern Grill opened at the Westin Westminster. Gravity Brewing opened as Louisville’s first brewery and Dizzy’s Doughnuts opened as Boulder’s only doughnut shop. BJ’s has opened in its new Boulder location on 28th St. and West Flanders Brewing Co. will take over its old Pearl Street location. Urban Bliss opened at the FlatIron Marketplace in Broomfield. Zanitas, a new fast-casual taco joint, opened on the Hill in Boulder. Cheese Importers has finally reopened in their new (larger) location at 103 Main St. in Longmont. Lucky’s Market in Boulder will open Lucky’s Bakehouse and Creamery next door with local baked goods and small-batch ice creams. Fate Brewing Co. broke ground in Boulder and is slated to open in Dec. Sad to say that Longmont’s Terroir (owner Tim Payne pictured above) closed its doors at the end of August due to a leasing issue and Gondolier on Pearl ended its 52-year run at the end of September. World Café (née Cuvée) in Boulder closed after a rebranding that didn’t seem to take. The Rib House moved its Boulder location to The Hill (University and Broadway across from campus). Check their Facebook page for details. Lenny and Sara Martinelli, owners and operators of Three Leaf Concepts, will take over operations of the famed Chautauqua Dining Hall.

Chef Brett Smith of Zolo Grill in Boulder will compete in the Food & Wine All-Star Weekend in Las Vegas. Zagat and Travel + Leisure list Frasca one of the top Italian restaurants in the country and Bon Appétit named Pizzeria Locale one of the 50 best new restaurants in the country. Door to Door Organics received “B Corporation” status—for being a company that “meets rigorous and independent standards of social and environmental performance, accountability, and transparency.” The LoCoYo frozen yogurt shop in Louisville has received the Dan B. Davidson Award for Excellence in Inclusion, by the Colorado Developmental Disabilities Council.