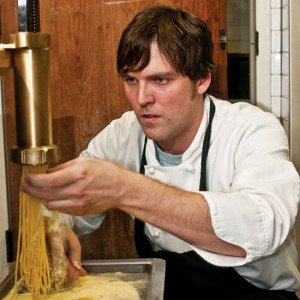 Originally hailing from a small-town in Iowa, Sippel has major, big-city restaurant cred, with cooking credits including L’oustau de Baumaniere in Provence, France, and Michael Tusk’s Quince in San Francisco. He has worked every station at Frasca and has been rewarded for his skill and dedication with his current position as chef de cuisine.

Essentially it’s an Italian fish sauce made from fresh anchovies; they lay them out on racks and salt them and then press it and this black liquid comes out. Mind-blowing stuff. They don’t import it into the U.S. now, but my friend’s trying to get it for me. Just a drizzle on cherry tomatoes, it’s really like nothing I’ve ever had. I don’t even know how to do it justice talking about it.

The ones on my right arm are Van Gogh’s olive trees from Provence.

If you weren’t cooking…

I know I’ll never leave the kitchen. But I’m good with writing. We’ve talked about doing a Frasca cookbook. If I had to stop cooking, I think it would have something to do with food and writing.

• 5 leaves of basil, cut in chiffonade

• Salt and Pepper to taste

Preheat an oven to 400 degrees. Dress the eggplant and bell peppers with olive oil and thyme. Dress the onion, fennel and tomatoes with olive oil and rosemary or summer savory. Season all generously with salt and pepper. Roast all veg separately to achieve nice color and flavor. Once roasted, mix all vegetables, seasoning with raisins, pine nuts, capers, basil and red wine vinegar. When the salad is mixed, plate and top with cherry tomatoes, fried basil, grated ricotta salata and a good pour of Sicilian olive oil.