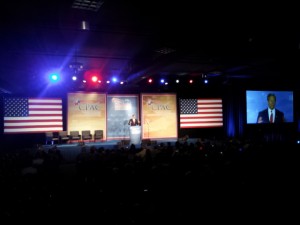 Update: 4:40 p.m. — The Colorado Political Action Conference, charged up after a clear win by Mitt Romney in his debate with Barack Obama, has wound down from its earlier sugar rush and settled into a vibrant, if more subdued, series of salons, panels and presentations meant to solidify conservative resolve in the few remaining weeks before the election.

Second Congressional District candidate Kevin Lundberg described the gathering as “charged up,” especially in light of last night’s debate. Romney’s performance has been a touchstone throughout the gathering, with many panelists referencing some frantic post-debate moments on left-leaning cable TV as evidence of how well Romney performed.

In many ways, the debate has been the launch point for all the topics on the agenda, which have included panels meant to debunk the supposed GOP “war on women,” discussions of economic policies, and the role of the media in covering the election.

But as charged up as the gathering may have been early in the day, the ranks are thinning noticeably as the day goes on. Compared to the crush of media on hand during Mitt Romney’s impromptu appearance early this morning — which included about a dozen reporters and photographers traveling with his campaign — the media has all but vanished from the Crowne Plaza Convention Center in Aurora. Attendance in the main hall is still respectable (with about half the seats filled), but seats in the lobby and the hotel bar are also filling up.

That’s not to say that enthusiasm among those attending the various breakout sessions have dampened since this morning. If anything, it seems that the post-debate glow that was so noticeable when CPAC kicked off has endured throughout the long day. There have been many pronouncements from the stage that would make liberals go crazy — “Thank god for fracking,” said Montana Sen. Ryan Zinke — and each has been meet with hearty whoops from the audience.

Overall, however, the convention has been absent overt Tea-Party hyperbole and instead reflective of something that seems to have been lacking from the political right for much of the election — a cohesive party that was enthusiastic in its support for its candidate.

Posted earlier: Fresh off of what has been almost universally viewed as a decisive victory over President Barack Obama during the first debates ast night in Denver, GOP nominee Mitt Romney made a surprise visit this morning to the Colorado Conservative Political Action Conference. The impromptu appearance electrified a crowd that was already flying high from his performance last night.

Romney reiterated the points that he used to keep Obama on the ropes, again calling the president’s policies “trickle down government” that have failed during his first term and which will continue to fail for another four years if he’s re-elected. Sticking to what worked so well last night at Denver University, he spoke mainly of the economy and promised to make jobs his primary goal.

The debate, he said, “was a wonderful opportunity for the American people to see two very different visions. … I saw the president’s vision as trickle down government. And I don’t think that’s what America believes in.”

Romney spoke after senators Orrin Hatch and Marco Rubio used the occasion of the debate to drive home the importance of Colorado to the presidential election, rallying the several hundred attendees to make use of the momentum to help carry Romney into the White House.

“We need to win Colorado,” Romney said, “and you know what, if we do, we’ll take back the White House.”

Although he was speaking to a sympathetic audience — the crowd surged to its feet when he took the stage and didn’t sit until he’d left some 10 minutes later — he was clearly just as jazzed about his debate performance as those attending the convention.

CPAC continues throughout the day with speeches, panels and breakout sessions. Check back here for frequent updates.