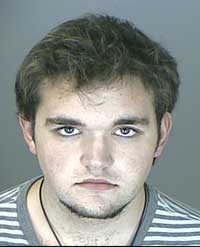 Police have arrested a 17-year-old boy in the investigation of Jessica Ridgeway’s kidnapping and murder.

Law enforcement received a call late last night that led them to a home near the Ketner Lake Open Space. Austin Reed Sigg was then arrested as a suspect. During a press conference at noon, the Jefferson County District Attorney and other officials emphasized that the investigation is ongoing and that law enforcement are still looking for tips in the case. There is a search warrant on Sigg’s home.

“Justice for Jessica is a process, and this is the beginning of that process,” Jefferson County DA Scott Storey said.

Charges are forthcoming and expected to be filed within the next couple of days. Sigg is expected to appear in court tomorrow at 8am. If you have any details about Sigg or the case, please call the Westminster Police Department’s tip line at 303-658-4336.

According to the custody report, Sigg is 17 and is a student at Arapahoe Community College. He will likely be charged with two counts of murder in the first degree and second degree kidnapping in relation to a failed abduction in May.

Earlier this week, officials confirmed the conntection between Ridgeway’s murder and an attempted abduction of a female jogger near Ketner Lake on May 28. The woman initially ran past the man. He then came up from behind and grabbed her. The woman reported that the man attempted to put a chemical-soaked cloth over her face. She escaped and called police.