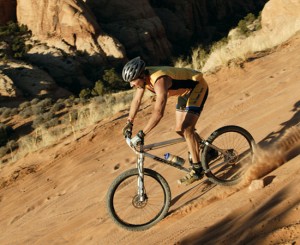 It’s Wednesday night. I’m in an RV with three other adults, one baby and two dogs. Considering yours truly has never set foot in an RV and usually spends school nights hiking, skiing or watching Netflix, this is not a typical Wednesday night.

We are heading to Moab for the 18th Annual (and sadly last) 24 Hours of Moab mountain bike race. I am fortunate to know two members of Team Zambi, Matt Weldon and John Ryan, and I’m tagging along while the team prepares for and then participates in the Sport Team Category of the race.

The premise is simple: The race starts at noon on Saturday and ends at noon on Sunday, and the goal is to complete as many laps of the 15-mile course through the desert in the 24-hour period. In each category, the rider who does that most laps wins. Teams and solo racers can enter, and there are multiple categories within each group, depending on how hard each individual/team wants to go and depending on varying levels of experience and ability.

Although the race will start on Saturday, Team Zambi wants adequate time to get situated and set up, ride the course a couple of times during day and evening, and mellow out a bit in the sand before the race starts. Everyone on the team is an expert mountain biker, but these guys and girls seem more happy to be competing than out for blood and glory on the course. The relaxed-yet-competitive vibe jives well with me and seems to reflect the spirit of the race, even amongst those riding in the more bloodthirsty brackets.

As we barrel west on I-70, I am starting to get excited for the four full days I have to explore Moab with my trail runners, my camera and the super sweet cross-country bike I borrowed from work. I’m also looking forward to meeting new people and learning more about mountain biking and competitive racing within the sport.

We get to our campsite Thursday morning after eating breakfast in Moab. It’s hot, but not too hot, dry, windy and pretty deserted (pun intended). There will be loads more people trickling in during the next day or two, but for now we can enjoy the relative solitude our early arrival

We proceed to set up camp. I am used to setting up camp as follows: pitch tent, sit down, crack open beer, get fire going when hands become too numb to crack open subsequent beers. I learn quickly that setting up camp for a mountain bike race is a much more involved process. We set up two overhead tents complete with a stove, bike repair table, two bike stands, bike racks and picnic tables and coolers loaded with food, wine and beer for the next four days. Those of us who will not be sleeping in the RV pitch tents to sleep in around the RV/base camp/party compound. It is car camping on steroids.

There are 11 staying at our camp. We have an Australian photographer, two babies, four doctors, a lesbian couple, two ski shop employees, three dads, two moms and two bike mechanics representing the two teams. Mountain biking, even at its more hardcore stages, attracts one of the widest and most diverse demographics I’ve seen in one sport. What I had initially imagined as a mecca for young, fit men turned out to be far more family-friendly than I had thought, and I saw quite a few heads of gray hair throughout the race, both on the course and off. There were also quite a few kids competing with the adults (rather than in the kids race), which was impressive and inspiring.

The course consists of one 15-mile lap, beginning on the road and veering off into the desert. I plan on taking my bike for a ride on the road, trying to ride a little of the course and bailing and walking when things get too technical (i.e. terrifying) for my novice skills to handle. Simple

As I ride off with Weldon toward some spectacular scenery, I quickly realize that desert biking is a much different breed than the single track I’ve imagined when I think of mountain biking. In a word: sand. Sand. Sand. Sand.

If you think walking or running in deep sand is hard, try riding a bike through it. I made it about a mile (and I’m being pretty generous here) on the road—yes, the road…as in the smooth, flat plane that is free of rocks, level and wide enough for a tractor to drive on. I had to get off and walk my bike downhill. I’ve heard of “hike-a-bike” on particularly grueling uphill sections of single track and certainly seen people get off their bikes to avoid having to huck off a huge boulder or cliff. I have many times had to walk my bike when confronted with ice, gravel or water, but I have never heard of anyone having to get off a 29er on a dirt road at the top of the hill because they couldn’t pedal hard enough to get the bike to go downhill.

Eventually, I managed to tackle this feat, which is a victory. But let’s put that into perspective: The racers would have to go 15-times longer, fighting Moab quicksand both uphill and downhill, and spending quite a bit of time biking on and between steep rocks, which tend to be surrounded by more sand. If you think momentum control is hard on single track, try maintaining momentum coming off of a steep, technical rock section to get you through an expanse of deep, loose sand, only to have enough steam left to start climbing up yet another steep, rocky section. Sound good? Now imagine doing it in the dark, against the wind, when it is in the 30s. For 15 miles each turn. Three, four or even five times.

This is what all the guys on Team Zambi had on their plate, not to mention the solo riders who would simply be lapping the course continually for the full 24-hour period. Where I would be feeling, say, an impending sense of apocalyptic doom descending on my shoulders, everyone around me seemed to be psyched for the challenge. Everyone I talked to was excited at the opportunity not only to ride the course but to get to ride it both during the day and at night.

As I hiked the course and stood near one of the harder sections snapping photographs, almost every person who rode past would remark between huffs and puffs, “Good morning! Beautiful isn’t it?” It became obvious to me that in addition to being a remarkable spectacle of athleticism (the winner of the men’s solo did 18 laps of the course in 24 hours), this race is about experiencing one of the most beautiful places in the country in a uniquely challenging way. Those who embrace this experience also appreciate how rewarding these “crazy” activities are. I felt luck that I got to hang out with folks who embody the best aspects of mountain sports and the lifestyle that goes along with it.

So look for me at a 24-hour race next summer…I’ll likely be the one covered in blood, freezing and grinning from ear to ear waiting on the Flight for Life.

View all posts by Allison Perry →