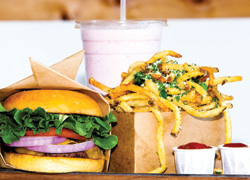 Paul Roberts of Two Dog Diner is taking over the old 7West location in Longmont to open Joe’s Restaurant. /The Corner opened on the Hill in Boulder. Confused? It’s a new restaurant offering healthy fare and local baked goods. /Under the Sun, a new restaurant from the Mountain Sun Pub & Brewery family, opened in Boulder. /Larkburger (pictured) opened a new location in Broomfield near 120th Ave. and Sheridan. /J Wells Brewery opened on 49th Street in Boulder. /Very Nice Brewing Co. opened in Nederland, the first of at least a dozen more breweries slated to open in the metro area in 2013. /The Porch Deli Market in Louisville expanded their space to include more seating. / Westminster’s Little Brazil relocated to Wheat Ridge. /Zanitas in Boulder closed, as did Tossa Pizza. /In addition, Boulder’s protein smoothie company Mix1 is shutting down.

Café Aion now has a Tuesday night happy hour and film extravaganza, playing outdoor adventure films in the bar and pairing with specials. /FORK Social Lab in Louisville is hosting a poetry dinner with Boulder poet Bill Keys at Beatrice and Woodsley in Denver on Feb. 10. /BookCliff Vineyards winery will host a special wine dinner with Bradford Heap of SALT The Bistro on Feb. 21. Tickets are $65 through the BookCliff website.

I enjoyed A Taste of Spain with Chef Bradford Heap at Colterra for a wine dinner in the restaurant’s ongoing series. Light-as-air salt cod fritters with caramelized local apples and fried bread topped with Long Family Farm ham and tomatoes started the evening off, followed by an exquisite albondiga stew with cinnamon and a Colorado lamb stew with olives and peppers. The evening was finished with a tiny local goat cheese tart and marcona almonds. While this evening won’t repeat, you can make reservations now for future dinners, including a Sicilian wine dinner on Feb. 21 and a Pacific Northwest wine dinner on March 21.