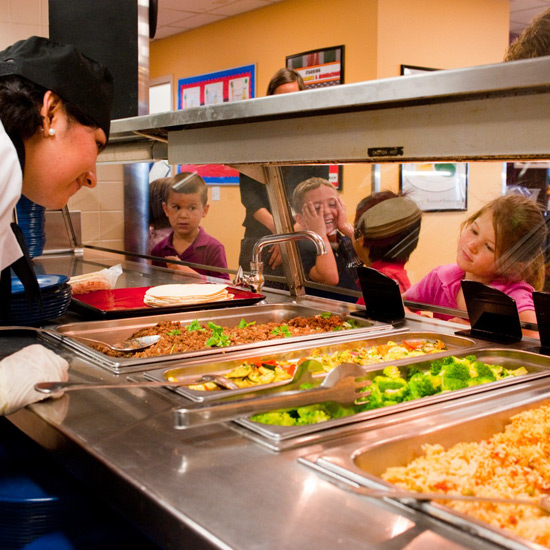 It’s uncomfortable talking to a child about their weight. You don’t want to say the wrong thing, make them feel judged or provide the building blocks to a complex. More importantly, you don’t want to act as a catalyst for that looming onset of self awareness. Over coffee at Ozo,  it was   uncomfortable talking about Stella’s weight, but that’s what I was there to do.

I had scheduled an interview to speak with the upbeat 10 year old and her mother, Rebecca Peterson, the week before. Interviews in public places always go the same way. You make knowing eye contact, get the nod that, in fact, this is who you came to meet and walk over to introduce yourself. But it didn’t happen that way this time. The minute I saw Stella, I knew it was her. With short brown hair tucked behind her ears and an olive complexion, at 4-foot-8, Stella is average for her age, but she is slightly overweight.

“Last summer, Stella had had some fluctuations in her weight,” Rebecca said while sipping iced coffee. “We went to the doctor and he wanted her to see an endocrinologist and a dietician. We did that and discovered that she was becoming insulin resistant.”

Much in the same way Stella opens her hands, revealing her eyes as she plays peek-a-boo with her baby sister, insulin works to open the doors of the cells. The hormone then transfers sugar from the blood into those cells for energy. When you’re insulin resistant, your cells aren’t opening their doors adequately, causing blood sugar levels to rise. The diagnosis is often followed by type 2 diabetes—a truth that would join Stella with a growing statistic.

The Center for Disease Control recently said that one out of three children today will have diabetes by 2050. But it gets worse. Those same children make up the first generation in our country’s history expected to die at a younger age than their parents. Childhood obesity is a national epidemic.

Stella was 7 years old when First Lady Michelle Obama announced a national goal of solving the challenge of childhood obesity. It’s called Let’s Move!, a nationwide campaign which seeks to ensure that children born today reach adulthood at a healthy weight. In an interview with ABC News,  Obama put it this way: “One in three kids are overweight or obese, and we’re spending $150 billion a year treating obesity-related illnesses.”

On stage at a TED talk in Huntington, West Virginia, renowned chef Jamie Oliver lifts a wheelbarrow and dumps its contents onto the floor. A cloud of white resin rises in the air. The powdery mass is caused by clumps of sugar, representing what a child consumes in five years of elementary school from chocolate milk. “I don’t know about you guys,” Oliver says, sugar sifting through his hands. “But judging the circumstances, any judge in the whole world would look at the statistics and the evidence and they would find any government of old guilty of child abuse. That’s my belief.” Studies have shown it’s also fact.

People who consume one to two sugary drinks a day have a 26 percent greater risk for type 2 diabetes. It’s why Boulder Valley School District (BVSD) did away with chocolate milk. On their website, BVSD explains that “children choosing chocolate milk for lunch on a daily basis…could potentially consume an extra 11-19 cups of sugar,“ translating into a weight gain of two to five pounds.

But sugary drinks alone are not the reason we’re in the mess we’re in. No one knows that better than Ann Cooper, the “Renegade Lunch Lady” who’s an ally of Oliver’s in his fight against childhood obesity. She’s also the person behind the changes to Boulder Valley’s lunch program. Photographs of her and Michelle Obama look onto the chef typing at her computer. On the opposite wall, a white board is mapped out with the week’s menu—penne pasta, tamales, cheese ravioli. Taking time away to talk, she begins by saying how this all happened.

“It really came out of WWII,” she said, “when we got the onset of better living through chemicals. Whether it was TV dinners, which came out of MRIs, chemical agriculture or refrigeration—we really started at that point being fascinated with fast food. Fast food and processed food and quick food. That’s lead to one or two generations not knowing how to cook.”

As a result, some children can’t identify basic fruits and vegetables. Cooper tells of students who don’t know that carrots grow in the ground or strawberries, on vines. With pesticides and fertilizers (chemicals developed for war and used for peacetime surplus), farms have been transformed into factories, and growing portion sizes have not been supplemented with increased physical activity. Children today are at increased risk for preventable medical problems—many of which are associated with mortality. Childhood obesity also has psychosocial consequences, such as lower quality of life and self-esteem.

“Stella was bullied at her school,” Rebecca said with a sour smile. “The kids called her hippo. I mean, nasty stuff.”