Our 3 Book Picks for the Holidays 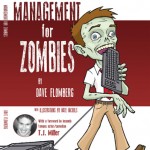 Given the Monday morning weekend hangover, you might think zombies have already invaded the workplace.  In Management for Zombies, local author Dave Flomberg takes it literally, tackling corporate America all at once.

What’s the best thing about zombies?

They’re the most accurate representation of what we struggle with as humans. Zombies are scary because it’s us without the concept of our sense of self—they’re stripped of individuality. At the end of the day, we’re driven by our basic needs, and that the absurd notion of who we are doesn’t really matter. Management flips that idea on its head in a satirical way. We’re another piece of the corporate machine driving home corporate shareholder profits.

Where did you get inspiration for the book?

I’ve worked in some pretty big corporations where leadership takes a look at its staff and makes stupid generalizations. That started brewing my frustrations with how they make decisions they rationalize but it’s short-term. How do I shave costs, and step up profits—and how do I do that on the backs of my staff? There’s many ways to be successful as a company. One  is to treat staff members as shareholders themselves. It’s a more rewarding game. Oh, and of course I’m a big fan of George Romero. More so Shaun of the Dead and Fido.

Best way to kill a zombie?

There’s only two ways. The easy way is a shotgun to the face, but there’s a lot of mess involved. The other way is to start treating them like a person. Once you give a zombie humanity, that zombie-ness disappears and you have your next door neighbor.

My kid sister—she’s in her thirties—gave me a notebook, and she’d written twenty-five things that she’d learned from her big brother. It was hilarious and touching, and really hit home—especially since I tormented her so much as kids.