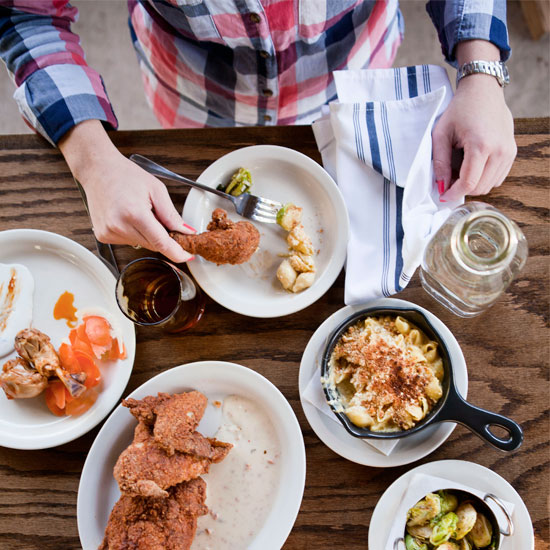 Remember when the Veterans of Foreign Wars post in Lafayette was an empty, outdated building on a sleepy side street? Well, it’s no longer a VFW and it’s no longer empty.

Instead, it has become the latest brainchild of David Query and The Big Red F Restaurant Group (think Jax, Zolo, West End Tavern, Centro and Bitter bar). And like every one of the other Big Red F restaurants, every detail of The Post was carefully and self-consciously planned, from menu items to actual dishes to the light fixtures to each specific brew.

If you like a hopping seen-and-be-seen bar atmosphere, then this is the place for you. Nightly wait times run 1-2 hours—people wait that long to get their hands on a piece of fried chicken and a cold porter. We decided on an early dinner to beat the crowds, arriving four minutes after the restaurant opened on a Saturday. By the time we got up to the front counter all the private tables and booths were taken leaving only a shared community table in the bar. We took it and perused the menu.

Post is all about the fried chicken. David Query and Chef Brett Smith traveled far and wide to sample many fried fowl to get just the right recipe for theirs. They start with humanely raised all-natural chickens, then brine the pieces, marinate in buttermilk, and toss with seasoned gluten-free flour. Once fried, it’s crispy on the outside, moist on the inside, and not at all greasy. In other words, this is not your typical fried chicken. It’s served with sausage gravy and a couple of pickle slices.

As all the menu items are a la carte, you can order sides separately—I suggest you get a few and share. Try the buttermilk cheddar biscuits, which are a cross between a buttery biscuit and a doughy roll. The broccoli and pepper slaw was without a doubt the best thing we tasted all evening—fresh and tangy with just the right amount of mayonnaise and crisp vegetables. The creamy grits, on the other hand, were not at all to my taste—too creamy (which sounds like complaining about being wet in the rain but really, they were too creamy) with little flavor.

When Big Red F set out to find a brew master for this latest creation they could not have been expecting quite the coup they got: the nationally known Bryan Selders. He started at Dogfish Head Brewery and has been on more than one beer-focused TV show. Bryan has brought his dedication to brewing great beers along with his quirky sense of humor to The Post and is already wowing crowds with his drafts.

I’ll return when the warmer weather comes in earnest, and the patio opens. A couple of pints of amazing beer, an order of fancy deviled eggs, and a whoopie pie served al fresco could be just the thing. And who knows, eating in the peaceful great outdoors might make you remember that sleepy VFW, which gave its building and name to this happening Post.