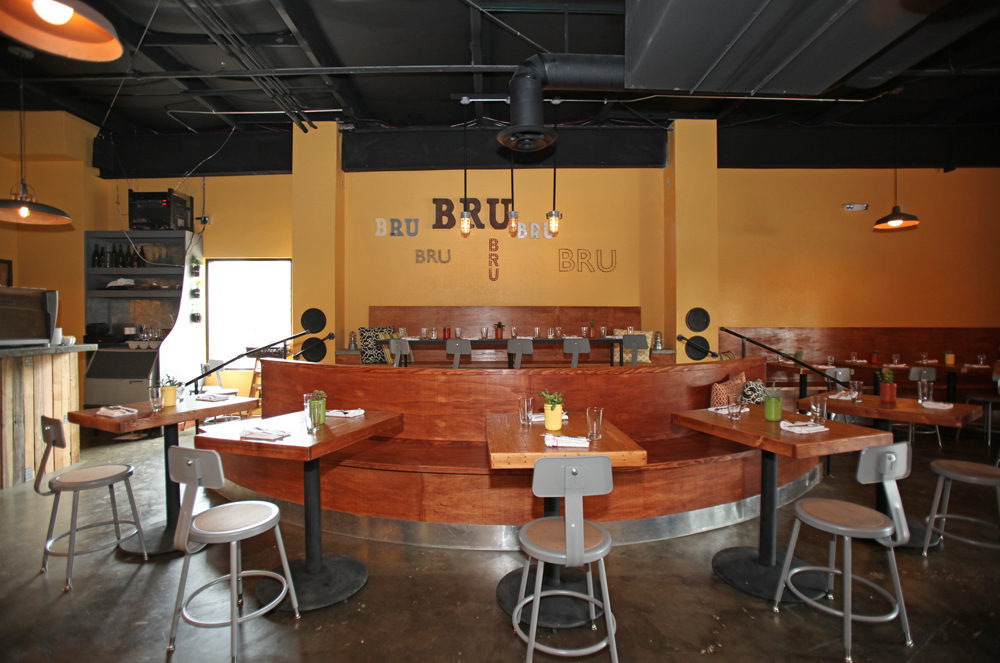 Just east of the foothills resides a humble brewery where your dreams of finding the perfect beer and pizza combination can become a reality. I visited Bru to speak with owner Ian Clark about how he started this hole in the wall brewery, and enjoy a few sips myself.

Ian started out like many restaurant owners, attending culinary school and becoming the executive chef at restaurants across the country. It took a cold beer on the breezy beaches of Mexico to realize that it was time to set up his own shop.

“I don’t know if it was the beer and sun talking, but I knew then and there that I wanted to start a brew pub from a chef’s perspective” Ian said.
Ian began brewing in his garage, learning the basics and developing his palette. Eventually, he started making all of his own equipment for all-grain brewing. He spent 10 years practicing in his garage and began selling his beer to stores on his small 10 gallon system. Ian brewed 8-10 times weekly, with each batch taking about eight hours from start to finish—over 60 hours per week on the low end In May 2013, Bru opened to the public, and kegs tapped out quickly.

The first beer I tried was Bru’s most popular, the Citrum IPA. Citrum was the first beer Bru ever produced. The slight citrus notes in juniper berries really bring out the bold flavors from the lemon zest making for a very crisp and refreshing IPA.

Packed with thirty pounds of rich, in-house roasted dates, the Obitus American Brown Ale was more indulgent. The rich flavor from the roasted dates and the caramelized sugar made me lose sight of the slightly higher than usual alcohol content.

The comforting honey flavor in the Beezel Belgian Style Golden Ale prepared me for the pleasantly surprising black pepper and bitter orange kick at the end. This beer will creep up on you as you get completely consumed by the whole experience from the gentle honey to the pungent pepper.

The Sumac is an abbey style golden strong ale that came to fruition after a friendly beer-off between the chefs at Bru. Everyone submitted their ideas, Ian wrote the recipes, and Sumac won. This bronze beauty knew exactly how to work my taste buds.

Ian is always finding new ways to incorporate his strong values of honesty and quality in his food and beer. Pepperoni isn’t just bulk ordered at Bru, it’s hand built. The pigs are raised at a local farm where they are fed the same grain they use in their beer. After that, they are delivered to Bru to be spiced and aged for six months before being served on their pepperoni pizza.

“We do everything the hardest way possible but the integrity of our products is of utmost importance to us here. If your pizza crust isn’t made from good, whole ingredients, the whole pizza isn’t going to taste as good.”

Ian Clark brews like a chef. Each of the ingredients used in the restaurant is carefully chosen and thoughtfully incorporated into every aspect of the business. Bru is not just a brewery, but a hand built business full of passion and respect for the food and beer they serve.

“A great beer is about the people that make it; it’s an expression of who we are.”