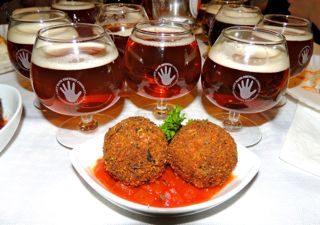 Walking into the Malt Room at Left Hand Brewery feels like a rite of passage into the beer connoisseur world. A secret clubhouse for ale aficionados where wooden walls (featuring mounted barrel ends) and dimmed lighting enclose the cozy hideout. On the night of Ales 4 Females, add to this image long bar-height tables with white linens, and a collection of boisterous beer lovers who just happen to be women.

Twice a month since 2008, Left Hand’s female beer club has assembled to learn from industry guest speakers and collectively develop their palates and beer IQ.

The night of my visit, Bubba Love is said guest speaker, the brewery’s Boulder ambassador who bursts into the room boasting an English schoolboy costume and an accent to match. (This will make more sense later.) At his side is the sombrero-wearing Joe Schiraldi (I should mention it’s Cinco de Mayo), the vice president of brewing operations for the company. Right away the energy changes and it’s clear this will be an interactive night. Together, Bubba and Joe lead a presentation about the differences between cask, draft and Nitro beers.

To start off the night, Bubba gives a toast (his accent has quickly faded into a blend of Cockney and Southern American) in the form of a poem. Amusing and surprisingly consistent in rhyme scheme, he ends with the declaration that everyone “is here to relish, enjoy and learn the historical significance of the Sawtooth Ale,” cuing a lesson to follow that is packed with far more information and insight than I’d expected.

In front of us all sit three testers full of the Sawtooth cask, draft (CO2) and Nitro, to be paired with plates of Arancini (mozzarella stuffed rice balls) and walnut carrot cake. The catch with these included treats, is that they’re meant to be enjoyed slowly, deliberately, allowing each of the beers to accent different qualities of the various flavors and layers in everything.

This sounds impressive in theory, but as someone who doesn’t generally think much about which beer I have with what food, I’m wary of how successful it will be in practice. I’m proven wrong, of course. One bite and sip at a time, I come to find that I actually prefer certain combinations to others. The draft and cask both go really well with the Arancini, but don’t do much for the cake. On the other hand, the Nitro doesn’t taste too great on its own or with the rice balls, but does complement the dessert. Others at my table find the opposite to be true, or even that none of the beers taste well with any of the food; all opinions going to show that as Bubba tells us: “no one tells you what your palate enjoys but you.”

What helps us all realize the differences and our own preferences is the simultaneous lesson we’re being given on each of the beers. With drinks in hand, Bubba and Joe explain the origin of Nitro beers (Guinness was first to use nitrogen and carbon dioxide), how casks differ between the U.S. and the U.K. (the Brits keep them warmer at 55 degrees Fahrenheit), and finally, how Left Hand derives their Sawtooth variations.

Without question, the highlight of the meeting is the slide show that winds down the night. Having recently returned from a brewery trip to England (now the schoolboy outfit makes sense), Bubba and Joe take us through photos of the highlights—lots of sheep and country pubs—sharing anecdotes along the way. Keeping with theme, the two men serenade us out to the Irish drinking song “No Nay Never,” with each verse growing exponentially rowdier; a fitting way to end a night that has no interest in being very serious.

Aside from a few women trying to conjure up a feminist vibe (so no ladies chose to go on the England trip, big deal), it is definitely not what Ales 4 Females is about. Though a great excuse for a girls’ night, anyone is welcome to the event which focuses on educating people about the various facets of beer, and building community along the way—aims that aren’t gender exclusive by any means.