*UPDATE: One month after we interviewed Tracy Morgan, he was in a severe auto accident that left him in a coma for two weeks. Thankfully, Mr. Morgan is in good health today. This CNN article reflects back five years after.

French Davis sat down with comedian Tracy Morgan for an interview exclusive to YS before his upcoming show at the Paramount Theater on June 1 at 8 pm. For the complete version of their chat (plus more entertainment news), check out our upcoming Summer Hot Issue, due out in early June 2014. 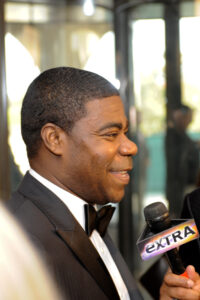 It’s been a year and a half since NBC’s irrepressible look-behind-the-scenes of a sketch comedy show, 30 Rock, ended its run. Since then, star Tracy Morgan released a Comedy Central special Bona Fide and launched his “Turn It Funny” tour that lands him in Denver on June 1 at the Paramount Theatre to a sellout crowd. While Tracy isn’t talking about his time on 30 Rock or his favorite characters from his stretch on Saturday Night Live, he is talking about growing up in the Brooklyn projects, why he loves standup and The Godfather.

French Davis: Your recent special talked a lot about how dark things are these days. Do you really feel that way?

Tracy Morgan: It’s already getting ready to get darker.

FD: Why do you think that is?

TM: I don’t know… ’cause where I come from it seems like things are a little bit lighter.

FD: What do you think we should be doing to turn things around?

FD: How does it feel to return to Brooklyn for your comedy special? Do you still feel like that is home?

TM: It felt great. It always feels great to go back home to your roots and do comedy. But I wasn’t just doing it for Brooklyn, I was doing it for the world, because people around the world saw it.

FD: Alec Baldwin once said “No one cracks me up more than Tracy Morgan.” Why do you think that is?

TM: That’s an awfully nice thing to say. You’d have to ask him that. You can’t ask me that. I don’t know. I’m funny. It’s kind, thank you. But I couldn’t tell you why he said that. I probably make him laugh a lot.

FD: Who makes you laugh?

TM: Me. That’s not being self-centered or anything else like that. But, me. I love my sense of humor. If it’s funny to me then I share it with the world. Other than that I like the gods: Richard Pryor, George Carlin, Jackie Gleason, Lucille Ball. I like the comedy gods, I try to get close to them.

FD: Any advice for upcoming comedians?

TM: Be funny. I don’t know what anyone else’s process is. Be funny. My process is my process, it doesn’t mean it’s going to work for the next person.

FD: We are excited to see you coming to Denver soon.

TM: I love Denver, I’m always in Denver. Denver is always one of the hippest crowds to play. They’re hip. They know what time it is. I shall be there with truckloads of funny.