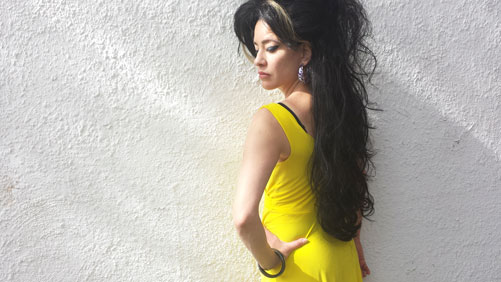 From Lez Zeppelin to Mini KISS to the legions of Elvis impersonators out there, the “tribute band” concept can vary wildly from cheeky satire to arguably-better-than-the-real-thing (Super Diamond, anyone?). Somewhere near the latter is where WINEHOUSE lives, the note-for-note, spot on homage to Amy Winehouse, comprised of local singer Toddy Walters and a 10-piece band that includes some of Denver’s hottest up-and-comers alongside long time local legends. Here, Toddy talks about her long and sordid Colorado past, doing jingles in LA and donning that epic Amy Winehouse beehive wig.

French Davis: Toddy, tell me about your background in the Denver music scene. How you got here, some of the bands you’ve played with – clue in the audience to who you are.

Toddy Walters: I moved to LA the first time after my first year of college where I lived for a year and a half. I was invited to join a band as a back up singer where I was told it didn’t matter what I sounded like, but just to wear short skirts and not worry about it. The beauty was, I was inspired to write music and believe I could start my own band. After moving back home to Denver, I started writing prolifically on my guitar and playing open mic nights, meeting many of the people I still know today — this was the early ’90s. I called my first band Toddy and her Assorted Beverages, which consisted of Phil Hegel on bass and Ian Keldin on drums. After finishing my first album, Grotto, produced by Kyle Jones at the Sleeping Brotherhood studio, I recruited a few Denver musicians to join me and move to LA one more time. I just called the band Toddy, and it featured Jimmi Nasi on guitar, Jeff Mince on drums and Brad Van Loenen on bass. We played for a couple years, then branched out into separate projects. I spent 13 years in LA where I performed on my own and sometimes with a band as “Toddy.” I collaborated with a few electronic producers, BT, Paul & Price among them. I sang on commercial jingles and did some odd voice over gigs. Ultimately, I moved back home once again to Denver three years ago and found open and loving arms with many former musical collaborators and dear friends. I now play in a few various projects, Toddy Ivy, Gata Negra, MetaLark, the Steve Law Band and now WINEHOUSE.

FD: How did the Winehouse project come to pass? Tell me about how that happened.

TW: Byron Shaw (Judge Roughneck, Byron Shaw Projex) is someone I’ve known since the ’90s and respect very much. He asked me to sit in as a singer for a couple BSP shows and during one of the shows he mentioned how he wanted to start a project that was an Amy Winehouse tribute band. I immediately said, “I want to be AMY!” And he said, “That’s why he’s mentioning it.” I think it was a brilliant and timely idea. I was never a hardcore Amy Winehouse fan, but when she passed, I was surprised how sad it made me because of how alive her spirit and music were.

FD: How frequently are you rehearsing? What’s a rehearsal like? Do you have particular Amy Winehouse shows you look to and then try to recreate?

TW: Well, since this band currently houses 10 band members, coordinating rehearsals can be like herding cats. I am absolutely aware of how lucky I am to have found everyone who is playing and know that they are all multi-project professionals. So, we roughly rehearse every three weeks. I am amazed by how efficiently collaborative the group is in rehearsal. Everyone is willing to hear feedback and desires to play the music with the integrity it deserves. We’re adding a bunch of different performances Amy gave at the height of her success in 2007–8 to our playlist now. The one we have done twice to great reception is from a festival called Les Eurokeenes De Belfort in Malsaucy, France. We recreate the shows as they were, the same set list, mostly the same musician line up, and her banter. I in essence “play” her as if in a musical play.

FD: What’s so special to you about her?

TW: What I think is the most special thing about Amy Winehouse is her absolute dedication to being who she was — not only the ground-breaking musician, songwriter and singer she became — but the dedication to her lifestyle, her addictions, and to the man she loved. There seemed to be no compartmentalizing her passions, and while being profoundly tragic, it’s pretty phenomenal.

FD: How is doing a tribute act like this different for you — creatively — than doing your own music?

TW: This type of performance is very different than my own original music, both in style and in expression. The only way for me to feel okay about portraying someone who is gone who was such an icon and not have it go into exploitation territory is to treat it as performance art. It really feeds my desire to act, which is something I’ve done quite a bit of a long time ago but have not concentrated on in years. This combines two of my greatest passions as an artist, singing and acting.

FD: Much of what gave Amy her inspiration was likely much of what eventually destroyed her. Do you have your own demons to draw from when you portray her? How do you “get into character?”

TW: Because I naturally gravitated towards performance early on in my life, being able to “capture” someone’s essence feels natural to me. I get into character by slipping into her physical mannerisms first. I’ve watched her live performances quite a bit and she’s such a fascinating creature and it has been amazing how much I identify with her. I can relate to sabotaging myself with substances, as well as loving people who have been more than careless with my heart. But putting on the wig, man, that seals the deal, I AM her at that point. What I really want people to get about this project is that this is a true and genuinely heartfelt tribute to a brilliant artist gone way too soon. This is an embodiment and at the risk of sounding freaky, I have already felt in our performances, that her spirit was there, and it is still alive and well!

FD: Any other tribute acts you like? Or are they any other acts you’d like to try doing?

TW: I have seen ABBA tribute bands, Pink Floyd and Neil Diamond tributes too, but to be honest, since those folks are still alive, it doesn’t feel as powerful as creating from the ghost of great performers. However, I am an absolute Kate Bush-o-phile, so, in a perfect world, I would create a tribute to her. If I wait until she passes, I may be 90 years old though!

WINEHOUSE performs at the Oriental Theater, 4335 West 44th Ave. in Denver on Aug. 29 at 9 p.m. Tickets are $6. Check out www.theorientaltheater.com for more.