The Privatization of Colorado’s Public Education

Type “Pearson Testing Controversy” into Google, and on the first page you’ll see articles documenting the education company’s mishandling of standardized tests in three different states. Continue to Page Two, and a couple more infractions show up, jumping off the page in that familiar bold cerulean font. Actually click on any of those links, and you’ll find an ominous litany of corporate missteps that would make Halliburton blush.

Here’s a (much abridged) list: In 1999, Pearson misgraded 12,000 tests in Arizona. The next year, scores were delayed in Florida, resulting in a $4 million fine. Later in 2000, Pearson misgraded 45,000 high school graduation tests in Minnesota, a faux pas that had obvious consequences for students who wanted to, you know, graduate. Let’s skip ahead, vaulting many such problems in the mid-2000s. In 2010 Florida once again fined Pearson $15 million for similar infractions. And last year, a passage from a Pearson test-prep book appeared on a Pearson standardized test in New York, giving an unfair edge to those who owned the book. As it turns out, those who could afford to buy the book were disproportionately white and upper class—from Upstate—while minorities in the city hadn’t had the pleasure of flipping through its pages.

And yet, Pearson remains a dominant stalwart of the education industry. It is the largest company of its kind in the world, and it grows only larger now that American public schools are relying heavily on private companies for every aspect of the standardized testing overhaul sweeping the country: developing teacher training materials, developing classroom curricula, creating the actual tests, grading the actual tests, and delivering scores.

Companies like Pearson and McGraw Hill (which itself has had a storied history in Colorado’s recent educational scene) are slated to be some of the biggest benefactors of the creation of the Common Core standards. Common Core was introduced in 2009 to create cross-state standards of education in math and English. Previously, states had developed their own guidelines, which, despite needing to meet certain federal parameters to receive No Child Left Behind funding, were created with local interests in mind. Common Core, on the other hand, forced states to join a testing consortium with other states in order to receive federal funds.

Colorado joined the Partnership for Assessment of Readiness for College and Careers (PARCC), one of the two main consortiums whipped up to snag federal dollars and create a cross-state testing platform. This spring, as time came to award a contract for the development of the curriculum, the winner was Pearson.

There was immediate outcry about the contract. The American Institutes for Research (AIR) filed a passionate protest against the decision, which was made in New Mexico on behalf of all PARCC states. AIR, however, isn’t a citizen watchdog whose sworn mission it is to protect students from the dangers of yet another Pearson fiasco. It is a competitor that also wanted to bid on the contract, but abstained, citing an unfair bidding process—which seems a bit like a small-time warlord boycotting the rigged election of a heavy-handed dictator.

While the AIR protest has retroactively delayed the awarding of the contract to Pearson, PARCC has incentive to expedite the process—its Common Core-aligned standards are beginning to be introduced for the 2014-2015 school year, meaning test materials need to be developed as quickly as possible. And even if the contract were awarded to a different company, it wouldn’t change one fundamental fact: private companies now control a large portion of our public school curriculum.

The increase in “high stakes” testing since the 1980s guaranteed this eventual reliance on extra-governmental sources of educational material. If standards are developed beyond the classroom, school or district, then an individual teacher can’t be expected to prepare an entire curriculum that adequately accommodates those guidelines. Each curriculum would be different, which is by definition not “standardized.” The educational parameters are drawn at the top, and distributed down the academic grapevine. Like many projects initiated by state or federal departments, saving money is a top priority, given the constant pressure from taxpayers and the constraints of public funding. This, in turn, inevitably leads to public-private partnerships—a contractor maintaining a highway, an engineering firm collecting climate data, or a worldwide publishing conglomerate deciding what is taught in classrooms.

Ceding responsibility for public projects in exchange for lower overhead costs is worthwhile if the quality of the product remains high. But on the question of American public education, the jury is still out on the privatization of standardized testing production. On one hand, the overall proportion of students in secondary and higher education has risen over the last two decades, and the duration of the average American student’s educational career still outspans many other nations. But in overall global education rankings (using the OECD’s standard, the Programme for International Student Assessment, or PISA), the U.S. sits at 30th in mathematics, 23d in science and 20th in reading. For a nation whose politicians boast of having the best schools in the world, the last twenty years of standardized testing hasn’t produced numbers to back up such a claim.

Would states be better off with more local control of education standards? For much of the past decade—before Common Core was adopted—Colorado was trying to regain control of testing guidelines. Finally, in 2011, Colorado was one of the first states to be granted a No Child Left Behind waiver, allowing it to use its own standards. It was a welcome move—a brief respite from externally imposed guidelines.

But Colorado’s testing system was once again overhauled by the introduction of Common Core standards (not technically an imposition of the federal government, since it was developed by the National Governors Association). The quick reversal of Colorado’s testing requirements means more than a confusing set of trainings and curriculum switches for our teachers and students—it means a heavy financial toll borne by the state for the creation of new testing materials.

If Colorado’s public education spending were at a healthy level, this wouldn’t be worrisome. But there are two reasons why every Coloradoan should be concerned about the current education budget. First, last fall voters rejected a measure to inject an extra $1 billion into the state for schools via an increase in income tax. (See our story on Amendment 66, page __.)

Second, the biggest legislative attempt to save Colorado’s education budget in recent years has been largely a failure. Amendment 23 was passed in 2000 to reverse ten years of budget cuts. In the 1990s, spending hadn’t kept up with inflation; the amendment required that the state’s education budget rise with inflation plus one percent each year from 2001 to 2011.

Unfortunately, once the recession hit in 2008, the amendment was reinterpreted to circumvent this stipulation. The language of the bill required a “base” amount of money to be paid per pupil to school districts, along with an extra “factor” amount of money added on top, which changed depending on the district’s needs. For example, a “factor” of money was added on if the district had more students with English as a second language, or more students that qualified for free lunch. After 2008, Amendment 23 was interpreted such that districts received the “base” but not the “factor” money, a decision that meant that poorer, more diverse districts with more “factors” would be hurt disproportionately. Needless to say, Amendment 23 has fallen short of its intended goal.

The argument behind joining the PARCC consortium and paying Pearson to develop Colorado’s curriculum claims that privatization saves costs, mitigating these budget shortfalls. Lacking an alternative, at present it will be hard to tell one way or the other. (If you have some spare time and feel like calculating the amount Colorado would spend on education if standardized testing didn’t exist, be my guest. Drop us a line once you settle on a figure.)

But what we do know is that the Pioneer Institute for Public Policy Research estimates that across the U.S. it will cost $15.8 billion to align states with the Common Core standards. And, we know that the pending PARCC contract with Pearson is worth, by some estimates, $240 million itself—touted by one education official in Mississippi as “unprecedented.” 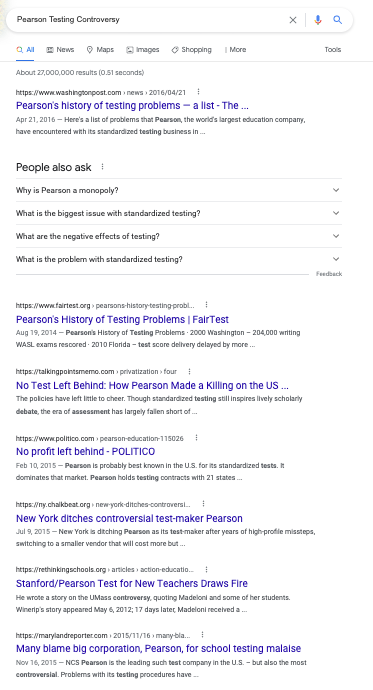 Let’s just hope that in a few years “Pearson Testing Controversy in Colorado” doesn’t turn up any results on Google.