Lost Before It’s Won: The Colossal Failure of Amendment 66 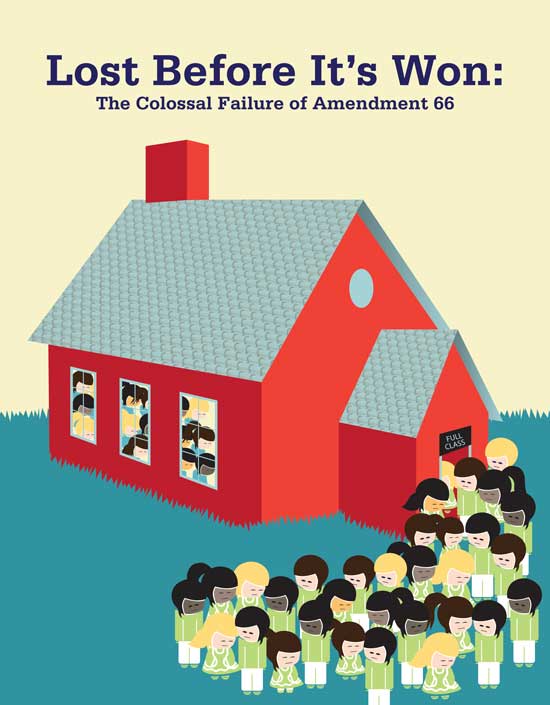 I’ve always wondered what happens to the celebratory regalia prepared for professional sports teams that end up losing the championship game. For example, had Peyton Manning not choked miserably last season in the biggest game of his career, he and his fellow pigskinners would have been wearing “Denver Broncos Super Bowl XLVIII Champions” hats within seconds of the closing whistle. Those hats are now somewhere—tucked away in a corner of John Elway’s attic, perhaps—existing as relics of an alternate history that won’t ever be revived.

Researching failed ballot initiatives, like last fall’s proposed Amendment 66, is like stumbling upon a box of those old, unused hats. Campaign websites sit in disrepair, gathering dust, their final blog posts dated in the minutes before or after final votes were tallied. In propaganda prepared by Political Action Committees—advertisements, digital pamphlets, doctored composite images meant to elicit a gut reaction—you find the gleaming results of a marketing intern’s many office hours, now rendered meaningless. But the reasons for the fight—in this case, an underfunded public education system—don’t die with the electoral failure. They remain as pressing as ever, but now without a way to be resolved.

Amendment 66 was defeated on November 5, 2013. Let me rephrase that—“defeated” is a bit too soft of a term. It was pummeled (an apt description, coincidentally, for the Broncos’ loss, too), with 64.46% of voters across the state rejecting the measure.

In short, the amendment would have increased the universal 4.63% Colorado income tax, differentially by salary, in order to raise nearly $1 billion for the state’s public schools. Those making under $75,000 would have seen their state income tax rise to 5% (an 8% increase), while those above that mark would pay 5.9% (a 26.6% increase).

The proposal caught eyes across the country. Its passage would have been an experiment in tackling many issues in state public education policy: reliance on federal funding, decreased spending-per-pupil relative to other states, rising class sizes and costs associated with new standardized testing requirements. Considering that Colorado’s annual education budget for the last few years has hovered around $5 billion, an extra $1 billion is an overhaul, not an influx.

Like any issue that carries heavy financial and political implications, the amendment was painted in very different ways by the two opposing campaigns. It was, if you talked to the right person, a necessary—and small—monetary sacrifice to ensure that future generations of Coloradoans contribute positively to the state and national economic, creative and cultural output. Ask another, and it was a coup for the teachers unions to gain members, solidify undeserved tenure and wrest control from local school districts.

The high-profile involvement of the teachers’ unions—represented by the Colorado Education Association (CEA), an affiliate of the National Education Association—reinforced claims that student benefits would take the back burner if the amendment passed. Of the $10 million spent on the campaign to pass the amendment, CEA spent $2 million out of its own coffers. (While some media outlets claimed it was $1 million, campaign contribution records state there were four CEA donations to Colorado Commits to Kids, the main PAC supporting the measure: $250,000 in June; $200,000 in August; $300,000 in September; and a whopping $1.25 million at the end of that same month.) With the benefit of hindsight, I’d like to point out that the total amount of money spent on promoting the amendment would have supported over 1,500 Colorado students for an entire year of instruction and materials at the state’s current per-pupil spending levels.

Right wing rancor was also sparked by Governor Hickenlooper’s decision to treat the amendment as his pet policy project. Until 2013, Hick had enjoyed a relatively steady governorship. Putting his full weight behind Amendment 66 made sense: if Coloradoans favored liberal social policies (ahem, marijuana) then support for teachers and students was likely, by political equivalency. (A major provision of Amendment 64, which legalized marijuana the year prior, was that $40 million of the tax revenues would go to schools annually.)

Perhaps, even, the passage of such sweeping education reform could add a more wholesome aspect to the ever-changing Colorado over which Hick presided—a narcotic-free portion of his legacy, if you will. He wanted to  “define Colorado as the national model for public education”—an admirable set of words, if they hadn’t come from his concession speech on November 5.

But despite electoral turnout in the past few years, Colorado isn’t a blue state. It’s a swirling concoction of haughty liberals, staunch conservatives, hard-nosed environmentalists, deep-pocketed oil lobbies and, increasingly, young professionals without kids in public schools. After the resounding rebuke of Amendment 66, critiques came from across the political spectrum that Hick had lost touch with moderate voters—it was his defeat once his name was on it, not a defeat for, say, the millions of children whose classrooms will now continue to swell and suffer from ragged textbooks.

Does political miscalculation account for such a resounding defeat? Or were Coloradoans averse to any income tax increase? Or, possibly, are schools not perceived to be lacking in any way? Or, if you don’t mind another unanswerable question, was the opposition so effective that any zeal for school reform was squandered before election day?

Low-tax libertarians and Tea Party players were the proposal’s most vocal opponents. Like “Colorado Commits to Kids,” detractors formed temporary PACs to funnel cash into campaigns. My favorite? “Coloradans Against Using Kids as Pawns,” which proved that sensationalism and negative advertisement are perfect bedmates—its website, which is still operational, shows an ominous Photoshopped picture of a cuff-linked hand moving a lone black pawn into battle against placid rows of ivory white chess pieces. The de-personalization of kids—turning them into faceless players on a political game board—would scare any parent, especially if you simply saw the image in passing.

Beyond fear mongering, classic post-recession right wing talking points were employed to argue against the proposal’s passage. Any tax increase would hurt small businesses trying to grow. Unions—need I say more? “Redistribution” was a common theme. (While every tax system is by definition some form of “redistribution,” the progressive restructuring of the wealthier paying a higher amount would have made this more apparent.) Fear mounted that the money would be used for teacher pensions and health care, something that could sound ominous if said with the right inflection.

A bona fide concern, which should worry any voter regardless of how many Fox News hours one has logged, was this section from the actual wording of the ballot initiative: “allowing all tax revenues attributable to this measure to be collected and spent without future voter approval.”

In 1992 Colorado adopted the most significant Taxpayer Bill of Rights (TABOR) system in America. In its basic form, TABOR requires that state tax rates are not raised above levels that reflect inflation and population growth—any surplus revenue can’t be spent superfluously on government projects, and must be given back to taxpayers. In the last decade, some clauses of Colorado’s TABOR system have been rolled back, but it still dominates the way the state collects its taxes. If voters had approved Amendment 66, the phrase “without future voter approval” would have been codified and open to abuse. Ironically, a loophole around voter-approved spending would have been created by a voter-approved tax initiative.

On one hand it would seem, then, that a year later things are downright peachy-: taxes stayed low, the state can’t openly spend our hard-earned money, and our Governor is more prone to accommodating moderate voices than before.

So why does the defeat—nay, the pummeling—of Amendment 66 matter? It matters because Colorado schools are facing changes unprecedented in, well, ever. For one, Colorado is the fourth fastest growing state in the union, but its spending on education hasn’t kept pace. For example, from 2010-2012 the state saw an influx of more than 18,000 students, but lost over 1,000 teachers. It ranks 43d in spending per student. And then there are the Common Core standards, which requires new testing guidelines, which in turn requires the purchasing of new materials, training of teachers, and money to have a private company grade the tests (see our article on Pearson and the PARCC consortium).