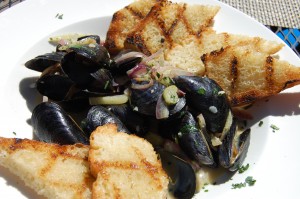 We can’t say for sure that the mussels served at Volta swam as far as they could and then caught a cab the rest of the way to Boulder, but they sure as hell taste fresh enough to imagine that could be the case. Cooked perfectly to allow the taste and texture of the shellfish to breathe over the butter and white wine sauce with red onions and fennel, these babies are served with delicious grilled bread. It’s a simple but very effective dish, delicate and light. To be honest, we could have eaten to orders.

Full disclosure – Yellow Scene‘s associate editor is English, and so he really knows British food. So you can believe us when we say that the chicken mushroom pie is delicious. Flaky pasty covers a thick and creamy mushroom sauce that is seasoned beautifully. It’s not subtle, but it’s hearty and not unlike the pies served in pubs in Britain. We recommend that you ask for a side of the chip shop-style curry sauce to dip the chips (fries to you Americans) in. In addition, the mini Cornish pasties, filled with chunks of beef and potato, make for an excellent appetizer.

Carelli’s has gone from being a sandwich shop two decades ago to one of Boulder’s best-loved and swankiest Italian eateries. Despite it’s cool-factor, it doesn’t always get the attention that it deserves. We recommend the real deal veal picatta with plenty of capers in rich lemon butter sauce, risotto funghi made with local wild mushrooms and white wine, fettucine alfredo – rich and creamy and scented with nutmeg, blue corn crepe with shredded chicken and arugula, and baked jumbo shells stuffed with spinach and cheese and baked with marinara. Don’t skip dessert, they are innovative and just begging to be shared. And this being Boulder, they’ve got a gluten-free menu, too. 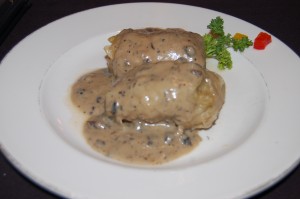 Polish food hasn’t always had the best of reputations; it’s seen by many as little mort than “meat and potatoes” food – simple and largely tasteless. This is unfair, although there are plenty of Polish restaurants out there that do nothing to dispel the myth. Cracovia isn’t one of these. While it adds a little bit of small print to the outside sign by billing itself as “Polish-American,” the food is fairly authentic and extremely tasty. Golabki is stuffed cabbage, a Polish staple, and here the sausage meat is smooth and knuckle-free, and the cabbage isn’t over-cooked. The magic is in the mushroom sauce (which we recommend over the tomato option). Rich and slightly peppery, it brings the whole dish to life. For desert, the paczki (Polish donuts) are delicious but not for the health-conscious. 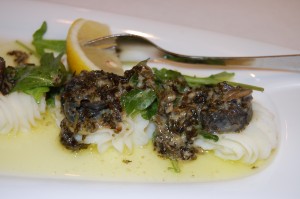 OK, so we wanted to eat light at a French restaurant but also try something fundamentally French. The escargot is the obvious choice. At this point, the world at large should have gotten over the fact that the  escargot is a variety of snail, not least because these little beauties are delicious. Six snails are served with a green herb butter garlic and gorgonzola on a little twist of mashed potato, and each one is a wonderful combination of textures and tastes. The bold gorgonzola and vibrant green herb butter compliment the meaty escargot so well, it’s like there’s an edible garden in your mouth. Because there kind of is.

Sometimes, the most simple dishes are the best. Many great chefs, including plenty in Boulder County, will tell you that there are few things more enjoyable than calamari cooked briefly with a little garlic and lemon juice. The Med know this, and their take on the dish is pretty much exactly that. Soft and mildly fishy, the dish is only lightly seasoned to allow the taste of the calamari to be overriding. They do serve it with a marinara dipping sauce, but we advise you to use it sparingly, if at all.

After the first bite of their famous Tay’s, it’s obvious why chef Jim Cohen, also of the Empire Lounge, is a Jim Beard nominee. Cooked in a traditional style with a wood-fired oven, this pizza was covered in fresh sausage, meats and classic Italian cheeses. Balanced by a crispy hand-tossed crust, the flavors come together to deliver moist—but not soggy—bites that beg for a big glass of red wine. The garlic, pepperoni and Calabrian chiles turn up the heat and spice, but gobs of fresh ricotta to put that fire right out. Your hand might turn black from the oven ash on the bottom of the crust, but this authentic hallmark is a small price to pay.

This place can be described in one word: homemade. Everything—from the sausage and sauerkraut to the brawny wooden tables—is crafted in-house. And while the sausages and cheese trays look wonderful, all that is really required to recreate your own Oktoberfest or feel like you belong on a Viking ship, is one of the homemade pretzels, and maybe (probably) one of the dunkel-style beers. Unlike the store-bought, freezer-kept rubbery versions that I happily ate for snacks in middle school (okay, and sometimes in college), the burly fists of golden dough that are served here might as well be called something entirely different. The crust is satisfying both in look—shiny enough to almost catch your reflection—and crunch; the middle is silky and warm; and the salt teams up with the sinus-clearing mustard to provide all the flavor you could ever need in this world (or so you’ll believe in that moment, at least).