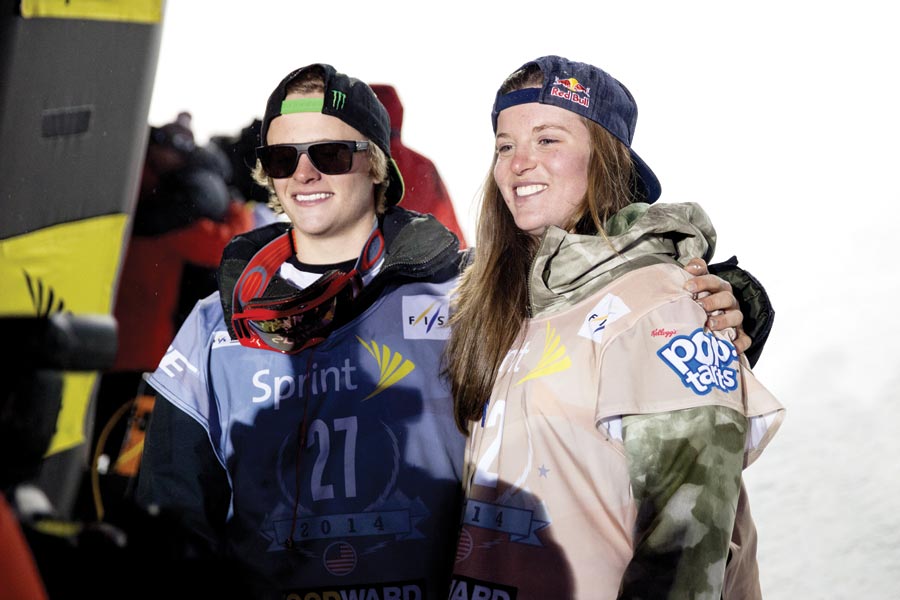 Taylor and Arielle Golds are snowboarding siblings, both from this region, who are simultaneously becoming major players in the national snowboarding scene. While it isn’t unheard of for members of the same family to be successful within the same sports (the Mannings spring to mind), it is still unusual, especially when the two siblings are of different genders and yet competing in the same events.T

It’s kind of hard to define ‘pro.’ I would say that being a pro snowboarder means that you can make a living off of it.

Taylor started skiing when he was two or three, and then started snowboarding when he was seven. By the time he was eight or nine, he was only snowboarding. “Since I started, I wanted to be a professional snowboarder,: he says. “It’s kind of hard to define ‘pro.’ I would say that being a pro snowboarder means that you can make a living off of it. My first real winter being pro was probably when I was like 16.”

Arielle tells an almost-identical story. “I started snowboarding when I was seven years old,” she says. “I had been skiing since I was three, and I decided to try out snowboarding because my brother Taylor had been doing it and it looked like he was really enjoying it, so I wanted to give it a try.”

So are the siblings competitive? Arielle says kinda. “Yeah,” she says. “I’d say it’s been nice having a sibling in the same industry. I wouldn’t say that it’s necessarily competitive. If there is any competition, it’s just if one of us isn’t doing as well in a contest as the other it can definitely be a bummer for whoever isn’t doing quite as well. Other than that, we’re just cheering each other on.”

The cheers aren’t just coming from each other either; their father has been professionally involved in winter sports too. “My dad was a mobile skier for quite a few years when he was younger, a competitive mobile skier,” Arielle says. “My mom just really enjoys the snow. She likes skiing but she doesn’t have a huge background in skiing. It’s just mainly because we moved to Steamboat. It’s just a natural progression to get into skiing or snowboarding when you live in a place like that.”

It felt so good to come back and out down the best run I did all season and take the contest, and not to be expecting it either.

Both Taylor and Arielle have had a huge couple of years. “I think winning the US Open was by far my biggest achievement,” Taylor says. “It was amazing. Going into that contest, I had gone to the Olympics and had kind of a rough time competing. It felt so good to come back and out down the best run I did all season and take the contest, and not to be expecting it either. That contest had so many good riders, and I was really hoping that I could just get on the podium, so winning it was crazy. [Being picked for the Olympic team] was huge for me. That was probably my main goal going into last year – to make the Olympics – and until this year I hadn’t had any podiums so it’s definitely been a big leap for me.”

“I think maybe the moment when I truly realized I had arrived was when I got third place in X Games in 2013,” Arielle adds. “That was a huge thing for me, just because I had been an alternate in the contest and ended up getting in, and didn’t have any expectations. I just wanted to go out and have fun so it’s really, really cool. I’ve had some decent results since that time, but that’s still one of the contests that I’m most proud of, just the way that I was riding there, and it’s such a high level event for a woman in general, so it was a pretty big honor to be able to get onto the podium.”