A place to be Mary 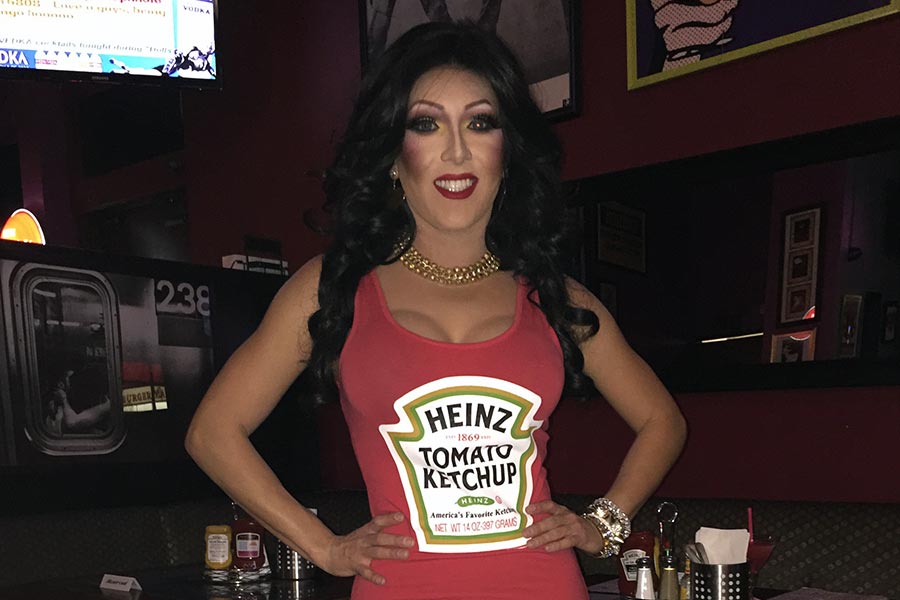 Boulder County, which is home to more than 300,000 people and houses a number of bars ranging from dive to chic, does not have a single gay bar. So the short drive south to Denver is where one must go to partake in all of the beauties gay bars have to offer such as drag shows. B

So, we went down to Hamburger Mary’s, a chain restaurant and bar that prides itself on not being the “cookie cutter” franchise but a family of locally owned individual restaurants around the country. But each Mary’s has on thing in common, it’s a place for people to come and “eat, drink and be… Mary.”

Upon walking into Mary’s on the corner of E 17th Avenue and Washington Street in Denver, the initial bombardment of people standing from wall to wall was a bit overwhelming, but the mixture of 90s pop and todays hits playing on multiple TV screens and blaring over the speakers made the bar a bit more bearable. We were lucky enough to have a table reserved for the drag show.

Arriving an hour before the show started, we were able to walk around and check out the bar and talk with some of the queens who were making their rounds. Every table was full and the bar was crowded, but it only took a few minutes to order and receive the $5 IPA. The service was phenomenal, and the crowd that consisted of a mixture of men and women, gay and straight, locals and travelers, were all gearing up for the show.

The patio in the back, that gathered smokers and patrons trying to escape the noise was filled with seating, heaters and a fire pit surrounded by couches offered the perfect escape from the overcrowded bar. It was also the perfect place to talk with Hamburger Mary’s regulars.

“I come here pretty regularly,” one patron said. “I love drag bingo and the drag shows. The host is always hilarious and most of the queens do a great job. Notice I stressed the word most.”

Once the show started, the host Jackie Summers wasted no time joking with the audience. She started with the table of elders, attacking them about their age in the way that a stand up comic would, making it endearing. She then moved on to a table in the back poking fun at the diverse group of people flirting with one man and asking them “who’s idea was it to bring the little white girl?“

For those that don’t know, this is how drag works. She was “reading” them, and doing a great job at it. After the library was closed, she introduced the first performer of the evening and the show started.

Most of the show was great, and the queens made an effort to make their way around the room collecting dollar bills and working the audience. The standout for us was Lacey Vanderpump, who brought the house down with Whitney Houston’s “I’m Every Woman” followed by Taylor Swift’s “Blank Space” and Kelis’s “Milkshake.” It’s not a competition, but if it was she would have stole the crown Friday night.

Of course, Hamburger Mary’s has more to offer than a Friday night drag show. We weren’t lucky, or hungry, enough to try the burgers but it just gives us a reason to go back. Perhaps for Mary-oke Mondays or “Dolls With Balls Bingo” on Wednesday.