A brief chat with Adrenaline Mob 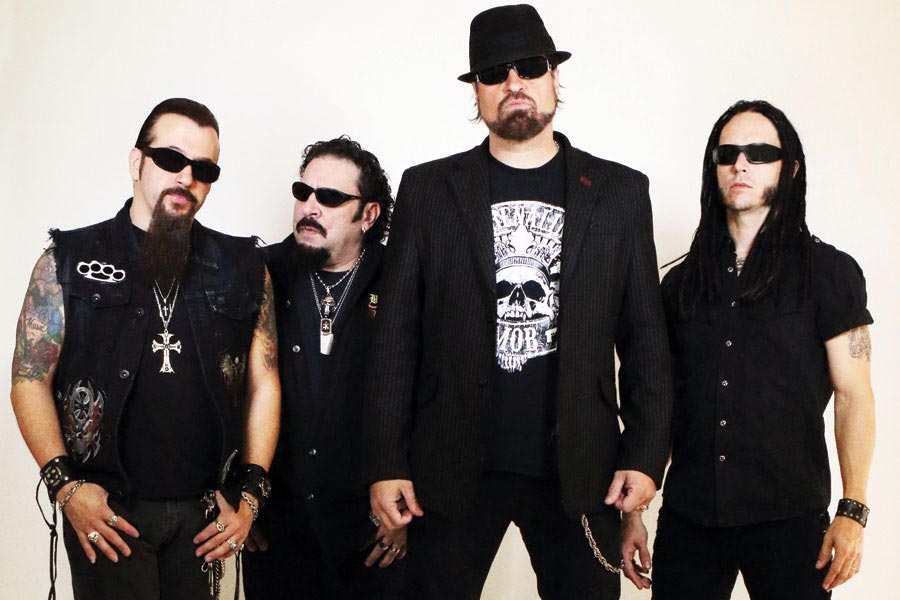 Heavy metal/prog rock supergroup Adrenaline Mob formed in 2011 when Symphony X singer Russell Allen and much-respected guitarist Mike Orlando hooked up with Dream Theater drummer Mike Portnoy. Last year, the band put out an EP of covers called Coverta, and that’s being followed up in February with another EP, Dearly Departed, this time about half made up of covers. We spoke to Orlando about the record, and what the future holds.
H

Yellow Scene: How did you choose the cover versions?

Mike Orlando: From some of the influences that are kind of the background to your life. To me, that’s Black Sabbath. Who doesn’t love Sabbath if you’re into hard rock and heavy metal? I’ve got a great singer like Russell Allen who can do songs that I haven’t heard Ozzy Osbourne do in so long that have the range, like “Killing Yourself to Live” and “Sabbath Bloody Sabbath.” Stuff like that. Russell just killed it. The band is really heavy, and A.J. Pero is grooving it like nobody’s business. Some of the stuff people threw at us for ideas. That’s where “The Devil Went Down to Georgia” came from. I’m a huge fan of that and so is Russell – he grew up with his parents playing country music. He knew the song already. He threw “Snortin’ Whiskey” back at me and I’m a huge Pat Travers fan. Queen – one of the greatest rock bands on the planet.

MO: I think we’ve really come into our own with the sound. We had great times with Mike Portnoy and made great music, but we’ve rolled into another great drummer with A.J. Pero. He brings such a groove and he has such a rock ‘n’ roll swagger to him – he’s like a tank back there. If you listen to “Devil Went Down to Georgia” and the Sabbath stuff as well, he just shines. I think the band has a tighter hard rock sound now. Really groove-oriented.

YS: Is this the best line-up you’ve had?

MO: Yeah. Everyone’s great in their own right though. I loved playing with Portnoy and I loved playing with John Moyer. Right now, we have a new bass player Erik Leonhardt who is a great addition. He’s got a great voice and really good groove. He was formerly in a band called Tantric. I do thinbk right now, the band is smoking. It’s got a sext groove and everyone is killing it.

YS: Do you have plans to tour?

MO: Yes we do. We just confirmed dates in Brazil for May. We’ll be there for a couple of week. We want to go through the States, and go to Europe. Unfortunately last year, we had some mishaps when we were on tour with Avenged Sevenfold and we to cancel almost a month of shows so we’ve got some making up to do.

YS: What’s next for the band?

MO: When this album comes out, we want to tour as much as we can. We’re open to any possibilities that come along. Then we head back into my studio and we bang out another full length. We love to create, and I live in my studio. It’s not a task for us – we love recording Adrenaline Mob music.