Mykki Blanco at the Larimer Lounge 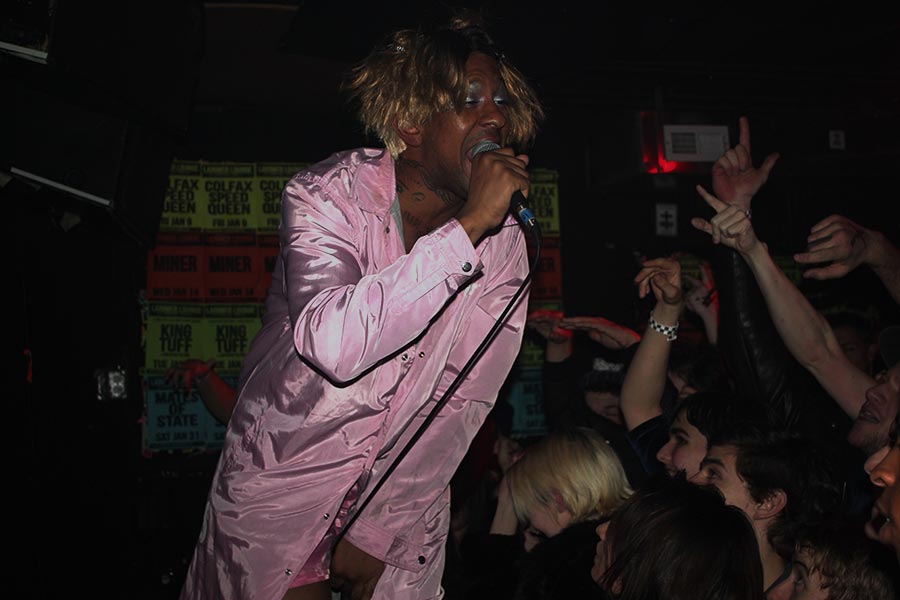 Denver’s Larimer Lounge was filled from wall-to-wall with an eclectic group of individuals Thursday night. We can confidently say that no one in the audience was wearing the same high water pants, scrunchies or mesh crop tops, but the one common denominator among the diverse crowd was the excitement as they revved up to see queer rapper Mykki Blanco, who is known for pushing the confines of sexuality and gender identity through his art. D

But before Blanco took the stage three, also very eccentric, local acts took the stage. First up was Lordz of Po$h, who performed to a nearly desolate room but it didn’t stop them from putting on a show. Clad in matching leather pants and holographic t-shirts, the duo brought experimental tracks from their MacBook and lyrics that we can only describe as chanting. What Lordz of Po$h lacked in lyrics they made up for in passion. Their entire 30-minute set was filled with jumping, hat changes and audience involvement.

Kitty Crimes took the stage following Lordz of Po$h to a slightly more crowded room and immediately demanded everyone’s attention. For the first couple of songs she displayed a nearly immaculate flow as she rapped original songs, one of which combined snippets of Kreayshawn’s “Gucci Gucci” and Outkast’s “Bombs Over Baghdad.” Once her band took the stage, she transitioned to a slew of slower songs showcasing her sultry voice. Oh yeah, she debuted a new original song about the perfect man.

“I just wrote this and it’s called ‘I Need a Freak Who Knows How to do My Taxes,’” she said.

As the room filled with more white people sporting oversized button ups and beards, Bollywood Life took the stage. Unfortunately, there wasn’t a single floor-length gown or colorful scarf, but nevertheless Anton Krueger, who stood positioned behind a fold up table covered in soundboards, still got the audience moving. As he aggressively produced electronic beats, the crowd grew more and more rowdy.

After his set, the sweaty crowd was ready for Blanco, almost a little too ready, as people congregated as close to the stage as possible. It was like giddy schoolgirls standing outside a boy bands hotel. One audience member thought it was necessary to share that she got to see Blanco pee outside, as if it was the best thing to happen to her all year.

When Blanco, who has made a reputation for himself through his elaborate, raw performances, took the stage in a silk robe, pink soccer shorts and combat boots the small Larimer Lounge burst into an eruption of excitement and for good reason.

Throughout the set Blanco made it a point to work the stage, placing the microphone stand across his shoulders and striking a crucifixion pose, picking up the amp and rolling it across the stage, pouring water on himself, stripteasing the audience and ripping a curtain off of the wall and wrapping it around his head.

He put on a flawless show even through his, sometimes reckless, antics. What we thought was a ridiculous amount of excitement for Blanco, turned out being justified. Mykki Blanco puts on one hell of a show.