A night at the Denver Eagle 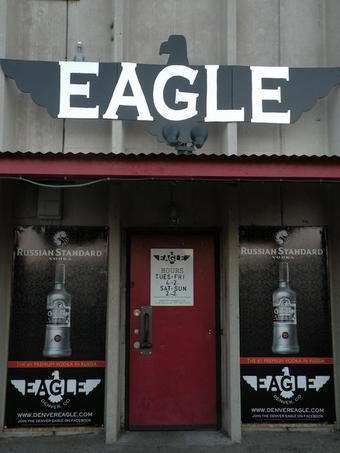 Walking into the old warehouse transformed into Denver’s branch of the Eagle, a chain of gay leather bars scattered throughout the states, we had no idea what we were getting ourselves into.

Most of the other Eagles we have been to in the past have all been very crammed and dark, with low ceilings and multiple floors, but Denver’s bar was nothing like this. The ceilings were high, really high, and most of the bar was on the first floor. Also, the TVs that usually show adult films or flash pictures of men was airing drag performances, which was a stark contrast to the overtly masculine men decked out in leather. .

Of course these deviations were a nice change of pace from the other bars by the same name. But not everything was different; there are many staples about the Eagle that transcend location. For example, everyone we spoke to throughout the night was friendly and open to conversation. Some may have been a little too friendly, buying us shots and beers, letting us slide by throughout the night without spending a penny. .

The bartenders were clad in leather, and were serving men fashioned in leather, plaid or even shirtless, which is not an uncommon sight. Scattered throughout the open floor were high tables, and people mingling. Some were even dancing to the pop music blaring throughout the warehouse. As per usual at the Eagle, the corners of the bar were dimly lit where men could “escape” the brightness. In one corner however, a few people were shooting pool. An outside patio was filled with smokers socializing. .

The most unique part of our trip was the theme of the night. Furries, men or women dressed in full body animal costumes, claimed the stage dancing to the music and grinding on each other. We will spare you the visual evidence. .

The themed nights are a something of a specialty for Denver’s Eagle. Every Tuesday through Sunday it hosts happy hour with endless beer or cocktails from 4 p.m to 8 p.m for only $12. .

On Wednesday, bartender Joch hosts a hanky party while serving $3 Rolling Rock. Thursday marks the underwear party with $10 domestic pitchers, and every third Saturday is gear night encouraging patrons to come with their favorite leather or fetish gear. Which is where we ran into the furries. .

Overall, we walked in expecting the same old bar, but left pleasantly surprised and a little tipsy.