The final note of UllrGrass 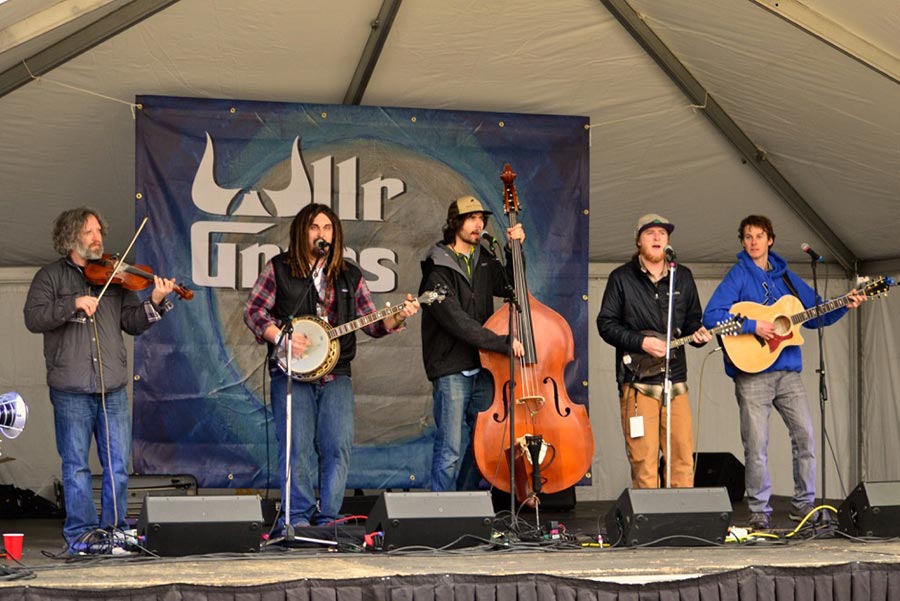 UllrGrass has now passed, and with it all the anticipation and excitement that came too. In its place is a sense of satisfaction. I saw more shows then I can properly recount, heard more songs than I could Spotify and met more quality musicians than I could have hoped. Thursday may have started the weekend rowdy, but Sunday finished it off satiated and peaceful. U

Band and Troubadour Contest started the event off right in the weeks leading up. Dinner with the Allstars on took place on Wednesday followed by Cervante’s Other Side, Gypsy Cattle Drive and the Toodlidoos performed alongside the Allstars on Thursday. Friday gave us RapidGrass Quintet, Luke Bulla and the Allstars, Peter Rowan and the Allstars and that’s not even mentioning the five other bands scattered about town. Simple takeaway, the Allstars were everywhere and playing with everybody. All of this was only building up to the main events on Saturday and Sunday.

The Kitchen Dwellers kicked off the main event on Saturday calling in the Ullr’ites for the Ullr Parade, which turned out to be a testament to the support and vigor of the crowd who assembled. For the musically minded, workshops were held at the Golden Hotel featuring some of the most accomplished musicians in attendance.

The guitar workshop, predictably had the highest attendance, but banjo came in a close second and fiddles brought up rear. Guitar was taught by Tyler Grant of Grant Family Farm and Jeff Union of Ragged Union and was tailored toward beginners, focusing on precision, timing and picking techniques.

Across the hall, Luke Bulla of Lyle Lovett and Coleman Smith of RapidGrass taught fiddle with a fair amount of time discussing the musical community and Texas fiddle tunes. The banjo workshop was perhaps the most collaborative. R.P. Oats of Thunder and Rain, Andy Thorn of Leftover Salmon, Kyle James Houser who has appeared with RapidGrass and Chris Elliott of Ragged Union bounced ideas off each other and noodled in a discussion on technique, rolls, and turnarounds.

The evening progressed with Mountain Toad opening its stage to Hardscrabble followed by Whiskey Tango, who delivered a fresh set to all the waiting jam jocks who showed up.

Peter Rowan held a private event that was not included in ticket price but was worth the extra dough. In the quiet dining room, Peter recalled his past and wove intricate tales of mishaps and accomplishments that accrue over a fifty-year career. The intimate dinner suited his more reflective nature. 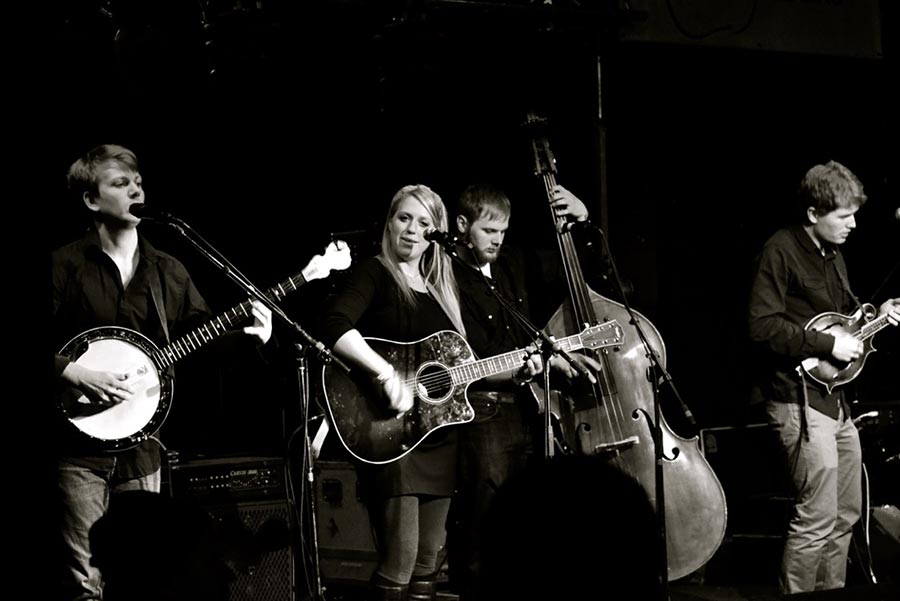 Thunder and Rain took the Buff Rose main stage at 8:21 p.m. and slayed it.

“I felt really good. The work is in the day to day,” guitar and vocalist of Thunder and Rain, Erin Lukes said. “The shows are where you trust that you’ve practiced enough and you can loose yourself in the moment.”

Lukes let us in on a secret about the festival that everyone participating felt.

“We formed in Golden and so this is like our home town; the energy in the crowd felt like we were playing for our hometown,” he said.

The group has been working on an official EP that should be out soon, really soon. They are heading to Wisconsin for the Swamp Grass festival. 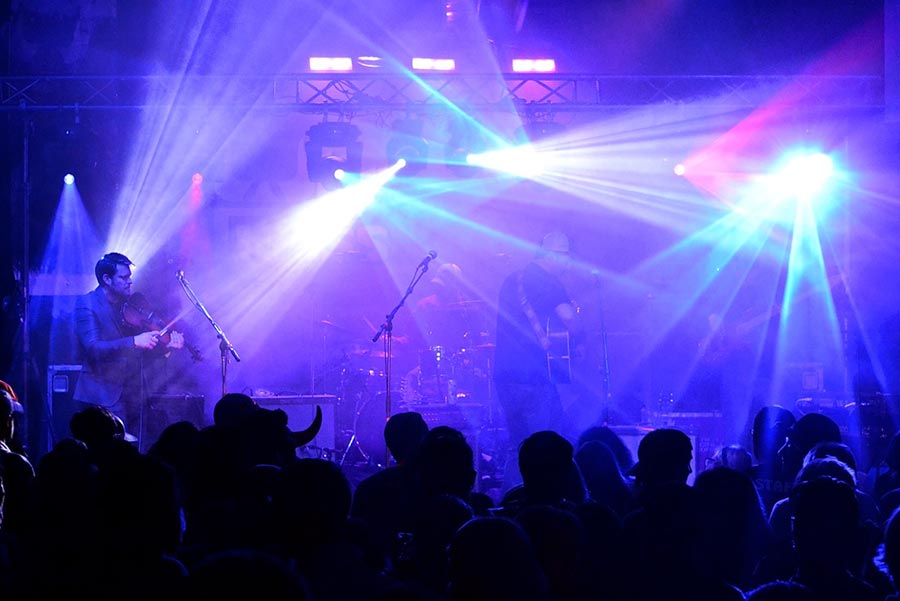 Coral Creek tapped into that feeling and took the evening to a whole new realm. With Luke Bulla on fiddle and the rest of the band playing in top shape, the fusion of Caribbean, jamgrass and bluegrass equated simply to good music and a fantastic show.

Head for the Hills closed off the night. It had been seven years since their last performance in Golden and the reception was overwhelming. Coming off their latest release the band mixed old and new material with traditionals and arrangements while the crowd hung onto every drop of sweat.

The first year is always the hardest but the show never suffered and the bands worked their shows around cancelations and improvisations’ making sure the crowd was still entertained. Ullr finally appeared Saturday night, and brought six quick inches of snow along with him.

Sunday was notably calmer and the kids had a great time throwing snowballs and huddling in the warming teepee. Not that there wasn’t carrying on, it was just a little quieter. So we’ll wait until next year, cheers to good friends and good community. 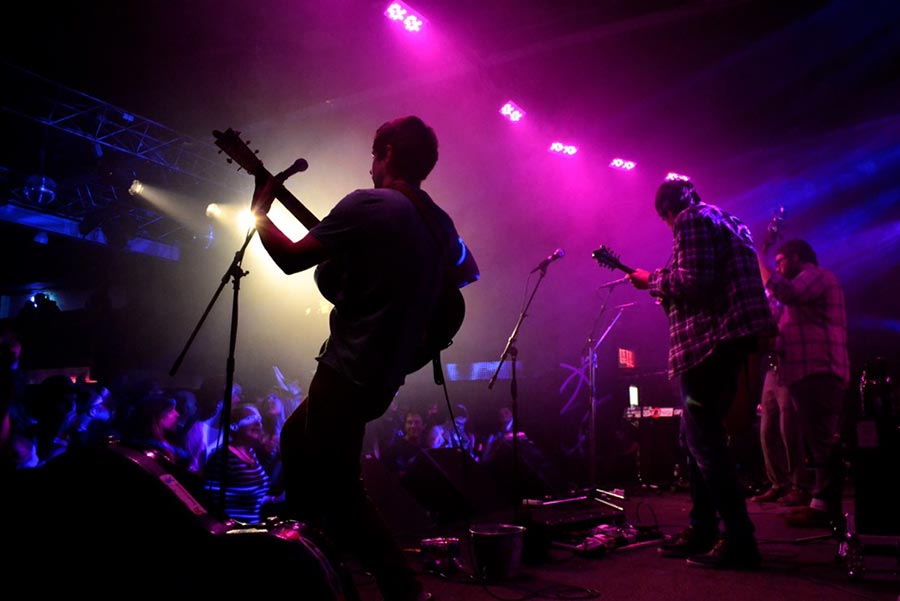 Head for the Hills | Photo by Julia Weiman