Simply swept away, a night at the Buell 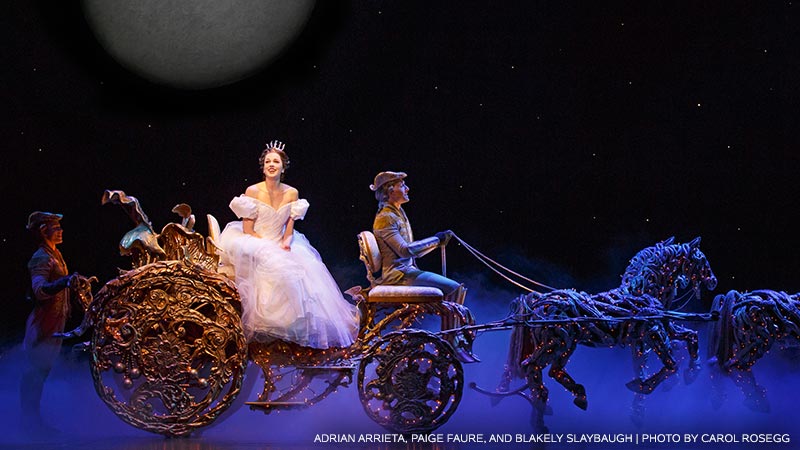 Rogers and Hammerstein’s Cinderella made its Denver debut at the Buell Theater on Tuesday, and the results were magical. The traveling cast, even without four cast members, has been honing their chops since Broadway and the stage was still full of wonder. R

Revived by playwright Douglas Carter Beane, any expectations of the classic Disney fairytale are immediately dashed with a dramatic and farcical battle between Prince Topher, short for Christopher, and a giant Them! like insect. Topher, Andy Jones, quickly defeats the foe and exposes his disillusionment at royalty and the nature of ruling.

Cinderella herself goes through a few transformations, starting with her character, which is notably more feministic and thought-out than anything Disney could have dreamed up. Played by Paige Faure, Cinderella becomes a representation of all women; she is able to create her own destiny and even picks up a dim-witted man along the way. Her fairy godmother, Kecia Lewis, describes herself as “everyone’s godmother” and it brings the hopeful princess out of all of us.

Beane used material from the 1899 French adaptation to bring the script to full Broadway length while using Roger and Hammerstein’s 1957 music and including a few new ones. The dialogue is firmly moved into the 21st century. Quips about lousy governments and husbands are scattered throughout, and although the one-liners were a more frequent in the second half a lot of them didn’t land, like UFOs.

Massive credit goes to the collaborative efforts of set designer Anna Louizos, costume designer William Ivey Long and choreographer Josh Rhodes for creating practical magic on the stage. No trap doors were used but with precise timing and easily transformable costumes and designs, rags turned into riches and pumpkins into carriages.

This production sounds like a little girls dream but it became much more than that once Beane got a hold of it. Clearly written after Shrek redefined the humor of children’s movies, half of the jokes would go over a 12 year olds head. Refined over the next 40 performances, in which time Frozen came out, Cinderella and her supporting ensemble portray a joyful and compassionate coming of age story with a bit of twist.

The show runs through the 15th and would make a great Valentine’s date night, you can even preorder drinks for intermission and skip the lines; it’s classy. There is no dress code but be reasonable. Highly recommended.