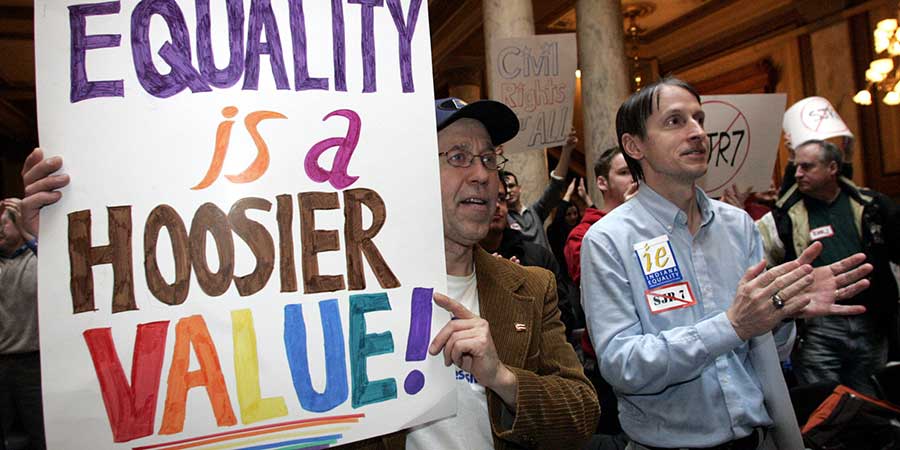 Even as I sit more than one thousand miles away from my home state of Indiana, I can still feel the frustration, anger and disappointment from the recent bill signed by Gov. Mike Pence that allows businesses to refuse service to anyone based on religious freedom. It’s a direct attack on the queer community, and pushes the state onto the wrong side of history. In short, it licenses discrimination. E

As a queer man who grew up in the Hoosier state and spent the majority of my 23 short years in a town where churches sit at every major intersection, I have never faced discrimination based solely on the people I choose to have in bed. And living in Colorado now, I won’t be subject to that type of discrimination today. But for my queer brothers and sisters, this law could easily affect their life in ways that I can’t even fathom.

Frankly, this pisses me off. But something else comes out of this decision: a glimmer of hope.

As I stated, during my 23 years of life I have never faced discrimination based off of my sexual preference. My family doesn’t care, and are 100 percent supportive. My friends don’t care. Of course I heard remarks in school, but I never let it get to me. This is the reality for a lot of young LGBT people. We don’t know what it was like for the generations that came before us, and sadly a lot of us aren’t taking the time or initiative to educate ourselves.

Being gay had a stigma as we grew up, but that is nothing compared to what has happened in the past. We could turn on the TV and watch Will and Grace with our moms. We got to jam to Spice Girls or Britney Spears, and swoon over boy bands, or in my case Hulk Hogan. We had the internet to browse and research why we were different to everyone else, and realizing there are a lot of people in the same boat. Being gay was somewhat normalized, and even glamorized.

But as we worked our way through history books, we didn’t get to learn about Harvey Milk, the Stonewall Riots, Act Up or the HIV/AIDS epidemic. They barely touched on the fact that gays and lesbians were also hunted down during the Holocaust.

This new law, if businesses decide to start rejecting gays and lesbians, might show these young queers just how bad we have had it, and how bad we continue to have it.

Not all states have health plans that allow state employees to obtain health benefits for their same-sex partners. Indiana doesn’t have legal protection statewide against hate crimes based on sexual orientation.
Hoosiers have adoption protections and now marriage rights. That puts them ahead of some states that have yet to recognize either of those, but the road ahead is still bumpy.

Nationally, states are succumbing to full marriage equality, but just 35 percent have employment protection and even fewer have hate crime protection at 31 percent.

This isn’t even touching trans issues or HIV protections.

These things are not going to change without a little radicalism. But in order to be radical we have to be pushed to the limit. This bill just might do that. This might be the kick in the butt my generation needs to stop resting and start taking to the streets like our predecessors.

So maybe this law isn’t completely a bad thing. There might be a silver lining.