How High is Colorado? 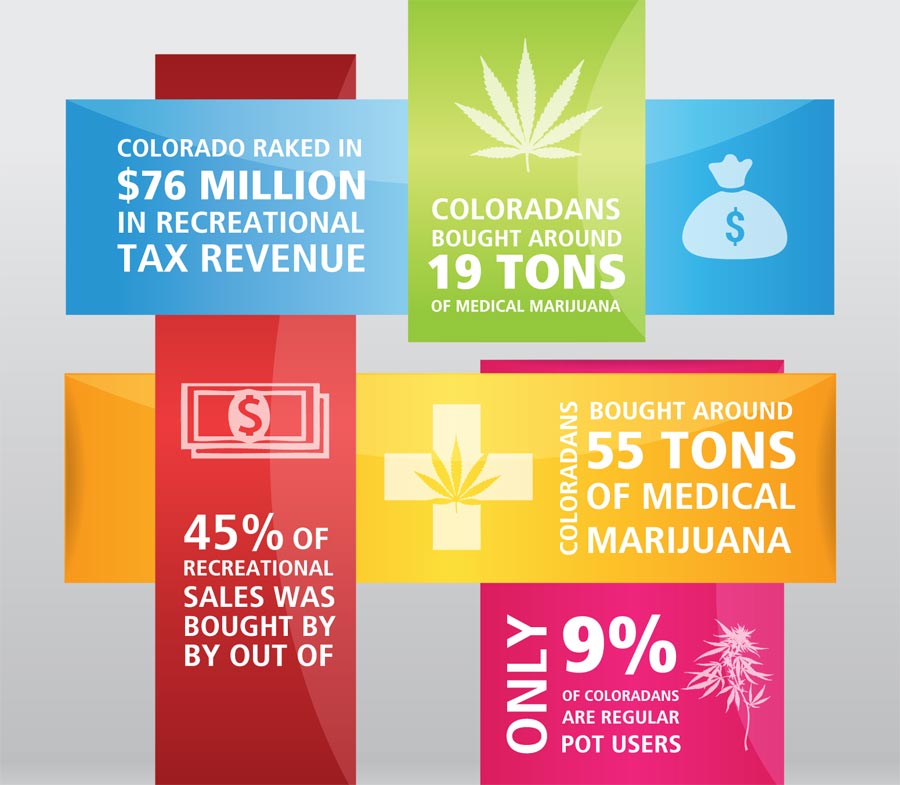 Colorado is one of four states that has legalized both medical and recreational use of marijuana, alongside Alaska, Oregon and Washington. Of course, this is not news to those of us that live in the state as dispensaries can be found on almost every block with high foot traffic.C

It’s been more than a year since the legalization of recreational use became a reality (medical use has been legalized since 2000), and the sales have been less than the expected.

For 2014, the governor’s office predicted that Colorado would rake in $100 million in tax revenue during their first year of sales, but that number turned out to be a bit of a fantasy. Those expectations took a dramatic drop down to $31 million during 2014. At the end of the fiscal year, Colorado ultimately made $76 million in revenue, which is only three quarters of the original estimate.

For those that think, or thought, that the legalization would help Colorado start rolling in a bed of money, like every bank robbing movie ever, the revenue is proving that is far from reality.

In fact, the legalization of recreational pot hasn’t changed much at all. While Coloradans bought around 19 tons of recreational marijuana, that number is nearly squashed by the 55 tons of medical marijuana purchased during 2014. From January to August, total revenue in medical sales surpassed $250 million, while recreational sales fell short of $200 million.

Of the recreational sales, 45 percent of that were bought by out of state residents, weighing in at 8.2 tons of marijuana being inhaled by visitors. It could be the raised taxes on recreational sales that has so many people acquiring their medical cards, or the number of people that continue to turn to the black market, selling out of their home or meeting in a grocery store parking lot. We’ve all been there, right?

Shockingly, recreational dealers in the state are not meeting 41 percent of demands. This is where the medical and black market sales step in and fill the gap. After all, there aren’t taxes attached to the dime bags we buy in parking lots and there’s a 78 percent difference on medical tax rates. So it’s just cheaper to get a red card.

But, even with easy access to medical marijuana and even easier access to recreational, only 9 percent of Coloradans are regular pot users. Only 30 percent of users are doing it more than 21 times a month, while the majority smokers are toking up less than five times a month.

A big concern from those opposing the legalization of recreational marijuana was focused on the crime wave that would hit our colorful state, but there has yet to be a pot fueled crime wave. That doesn’t mean that arrests haven’t been made. In Denver, pot related burglaries rose 32 percent, and citations for public use rocketed 245 percent.

DUI’s also jump up 70 percent during the first nine months, but it barely holds a candle to those given to drivers who were drunk, as opposed to stoned.

This is just the first year for the legal sale of recreational cannabis, and no one knows what the following years have in store for Colorado.