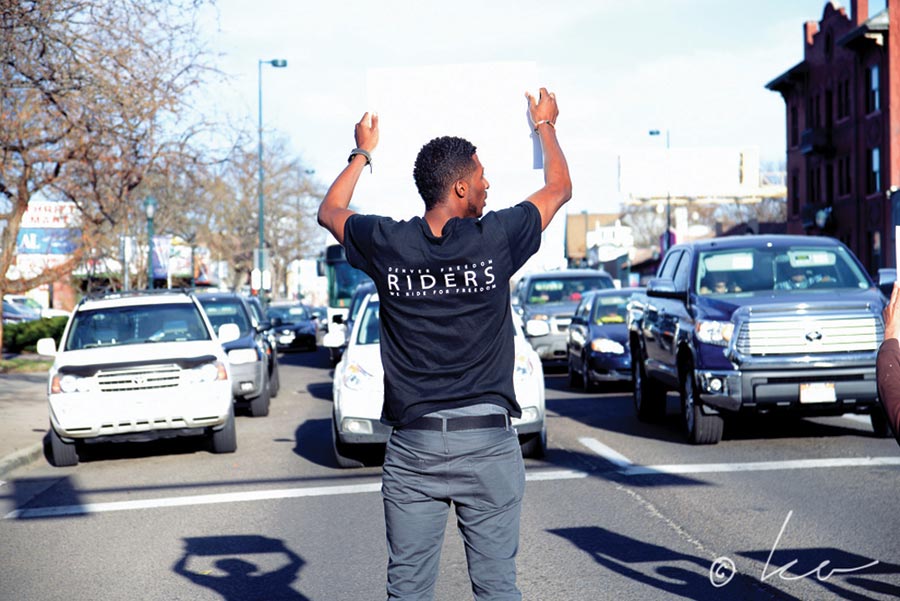 Anthony Grimes is a Denver native, with a lot of passion surrounding his home town. More specifically, he is passionate about the neighborhood he grew up in, and is willing to fight for it’s survival and for the survival of his neighbors. Grimes is an activist, and has one very important mission: redeeming the soul of America.A

Yellow Scene: Why don’t you start off by letting us know what you do.

Anthony Grimes: I am a pastor, writer and a community animator. What I do on the ground is a lot of connecting people and ideas, and how we can bring light to situations and build what needs to be built in communities. That’s how I describe myself as far as a title goes. On a more practical note, I’m the founder and vision lead of the Denver Freedom Riders and the director of Park Hill Parish. Park Hill Parish is a community of people in Park Hill who view this under served, mostly black, now gentrifying community who view this as a place in which we develop and exercise our spirituality. One goal is to humanize different spaces through our spirituality, and another goal is locking innovating social enterprises for our neighborhood.

YS: Can you tell me a little bit about what the Denver Freedom Riders do?

AG: The story goes like this. Shortly after Mike Brown was murdered, I flew into Ferguson by myself to join the demonstrations, and I was so touched by the people there that I wanted the people in Denver to experience it. I met the most brilliant people on the ground. I met young black youth who were politicized, and very informed in brilliant ways. The energy in the community really made me a new person. In a lot of ways I was reborn as a person on those streets, and when I came back to Denver I knew I wanted as many people from my city to join me. I ended up getting a lot of people wanting to go, and we organized these free rides to Ferguson from Denver. As we drove, it built a community of people from our city with a very diverse group of people. When we got back to Denver, we thought ‘well now what? How do we bring the movement here to Denver?’ Well, we’ve had a couple demonstrations, we had a big Black Lives Matter conference on MLK Day and it ended up growing into a community of people who have the same ideals and understood where we stood. Now, we call ourselves a family, also an activist group that is based in Denver and we’ve been invited to the center of a lot of different conversations on how to rebuild our community. We’ve led many demonstrations and rallies to put pressure for a demand on better neighborhoods. Lastly, we do a lot of community building where we’re connecting with young people and trying to give them opportunities they may not have and awaken their conscious, awaken their moral choice.

YS: What inspired you to get involved in the social justice movement?

AG: I’m a young black man, and I have two kids. There was this intuitive sense that I had to be there, because I felt very strongly about the need for us to stand at the forefront of this issue. And literally stand outside where the issue was being raised in Ferguson. For me it was very much a gut level reaction after I saw the movement on the livestream and the injustice surrounding Mike Brown. I don’t think I could live as a human being if I didn’t do something about this. When I went my goal was to show as many people as possible that they were not alone and to stand with people my age and younger. I wanted to let them know that I am here from Denver and we are representing you. You are not alone.

YS: Were you getting involved in social justice issues before you went down to Ferguson?

AG: I was. I have been a part of the national task force for Christian Community Development Association. It’s been about four years that I have been personally invested in incarceration. I read a lot of books, and found myself preparing for something, but I had no idea what. When Ferguson happened I already had a ground work just from an intellectual standpoint, beyond the brutality that was happening. I could see the connections with the war on drugs, the connection with the incarcerated society. I believe activism is something I’ve been doing this since I was four years old. My sister and cousin were murdered as they were walking across the street by a driver. The driver didn’t get arrested or even a ticket. My mom took it to court and lost because the officers didn’t follow through on protocol and he ended up getting off. I saw my mom saying that she was going to be committed to loving all people, including the man who did this. I grew up with the need for justice and the need to love all people. Both are still realities in my soul. 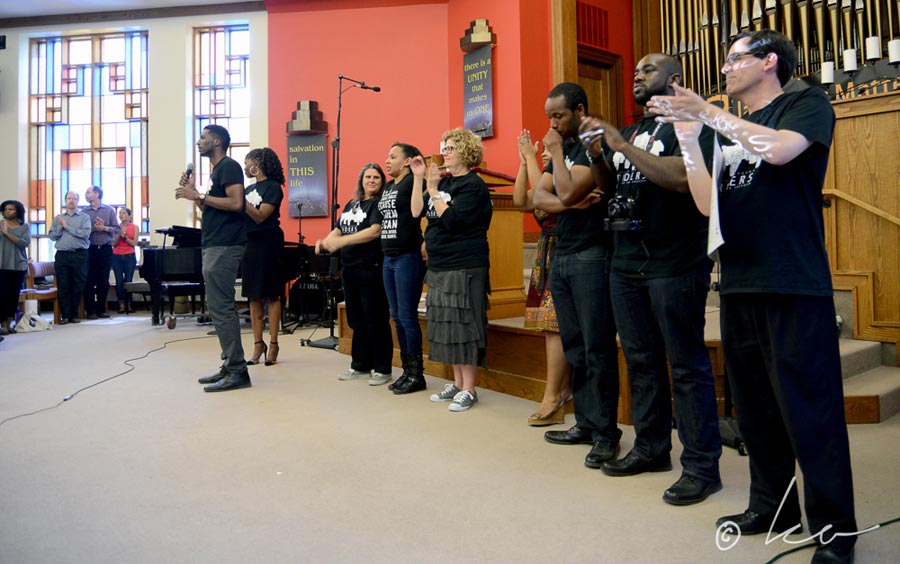 YS: Have you met a lot of people who share these same values in Denver?

AG: Sure, there is an emerging community who understands the importance of connecting our work to a spiritual side of us, and realizing that we have to come together as a community and go deeper than republic and democrat, go deeper than civil right language, go deeper than human right language. It’s a moral compass that we live by, that is not down to any one faith or religion, but I believe it is something that every human being has access to. There’s a community of people that are starting to realize that more and more. We are seeing some progress legally too. We are seeing bills being passed that are influenced by this movement. We’re realizing that we have to, in these neighborhoods that are suffering, give them something beyond a new law. A new way of living and thinking, a new paradigm where they can see the world in different ways. There are definitely people that are starting to understand that.

YS: What are your plans for the future?

AG: We are reorienting our emphasis from protest to resistance. Protest is declaring that something is wrong and usually it’s a verbal statement or written declaration. Resistance is disrupting the movement of something. We are really emphasizing our struggle, which we are moving in nonviolent principles, but we really have to disrupt a lot more to see the change we want. As the weather gets warmer, we are really focusing on staging Denver more and more as one of the national platforms for the Black Lives Matter movement. We are going to do this in some of the creative ways that we have. Since we live in a very creative community, and we are artistic and young and we want to use our assets as a city to our advantage. We have to get more creative on how we resist. We are going to be putting more pressure on elected officials, and continue to push the agenda to consider black and brown people. We also want to continue the Freedom Riders, traveling to different places in the nation that are facing social injustice and show them our support.

YS: Do you guys also focus on the social injustices of other minority groups?

AG: We do. We want to collaborate among different oppressed groups. In our coalition building, we have been trying to build more relationships with the queer community, more coalitions with the disabled communities, more coalitions with the Latino communities. We are unapologetically black led, but as we deal with issues in the black community we want to show that we are intersecting with other issues and people that do that. We have not yet engaged at the policy level with some of those issues, but it is in our future.