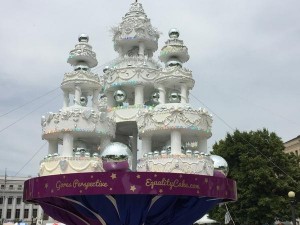 It’s been exactly a week since I started revving up for my first ever Denver Pride. Today I sit in the same exact chair that I couldn’t wait to depart from last week, but now I’m thankful for the sturdy back and cushioned seat. The recovery process has been brutal, but worth every second.

I’ve celebrated Pride in a few cities across the nation, but Denver sure knows how to celebrate the queer community. It was impossible to walk out of the door in Denver and not be assaulted by a wave of rainbow flags, tutus, nipple pasties, white thighs and shirtless men. The smell of sunscreen and beard oil lingered in the air. Laughter, shrieks and snaps could be heard on any block in Capitol Hill.

Denver, celebrating its 40th Pride, hosted a number of events this weekend, too many to attend, so going into the weekend my plan was to go wherever the wind blew me. It worked out perfectly.

Starting out the weekend a bit early at the Eagle for Underwear Night was great. The leather bar blocked off part of the parking lot, allotting room for an outside bar and dance floor. There wasn’t much dancing, due to the sheer volume of men, women and everyone in-between parading around in their underwear, or waiting in the incredibly long drink line. Even with the influx of people and slight change in presentation, the bar didn’t lose its lovable, grimy charm.

The following night, on Friday, the bars around town erupted. Tracks hosted its monthly show Drag Nation with special guests, Raja and Sharon Needles from RuPaul’s Drag Race. A national bear event Bearracuda was hosted at City Hall. The Wrangler had a glow party (glow sticks, for the uninitiated). But I skipped all of those events to attend Honcho.

Honcho is a queer party from Pittsburgh, which was just named the second best in the nation. Making it’s second appearance in Denver, the party lived up to its reputation. The setting was an abandoned warehouse, with a junkyard in the back lot complete with porta potty and broken down cars. A number of DJs supplied an abundance of dance music, but the real party was in the back lot. People from all walks of life came dressed up. People came dressed down. People danced the night away. It was the best queer event I’ve been to in Denver, and staying until 4 a.m. was the best decision I made all of Pride.

Saturday and Sunday were filled with queers from all around displaying just how proud they were at Civic Center Park. Walking through the crowd it could have been any other Pride I’ve ever attended. There were radicals. There were advocates. There were families. There were people who took the opportunity to drink, and walk around nearly naked. There was a giant equality cake, that represented how far we have come, and how far we still have to go.

Rounding off the weekend, was a final drag show at Charlie’s with special guest Alaska Thunderf*@k from RuPaul’s Drag Race. The intimate stage, local queens, and the bars first Drag Race alum made up for one stellar ending to a phenomenal weekend.

But it doesn’t have to end. Celebrating once a year is a crime. Don’t be afraid to rock the nipple pasties and rainbow tutus. Be proud of who you are all year round, and make every day your own little version of Pride. Maybe with a little less drinking though.