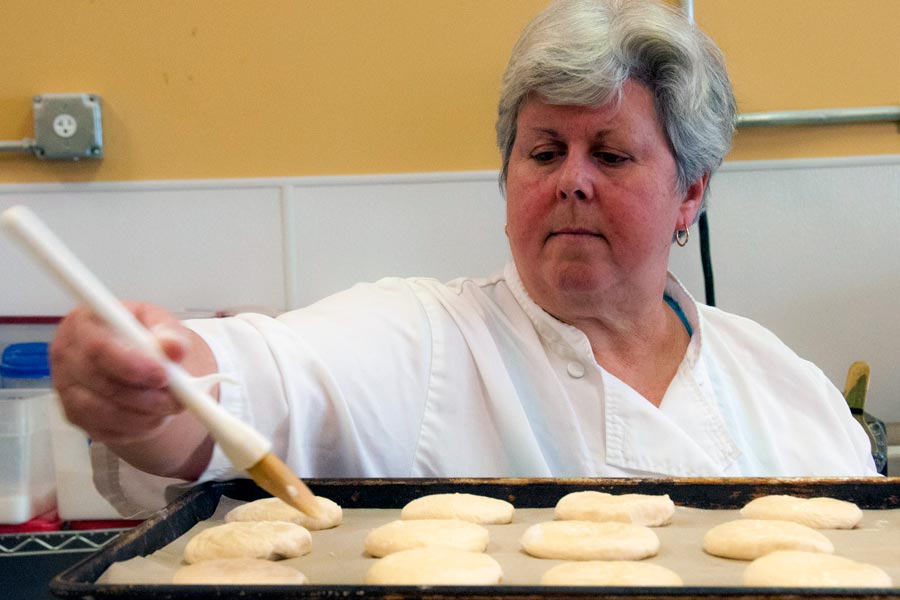 You know you’ve earned a place in your customers’ hearts when they give you a nickname. But for Kathy Rosser and Susan Bright, owners of Marketplace Bakery in Longmont, it wasn’t the nickname they were hoping for.Y

“All our customers call us The Bread Ladies,” Rosser said as she was prepping some of her signature hamburger buns for the oven. “We would prefer The Ladies with the Nice Buns, but we’ll take The Bread Ladies.”

The endearing moniker, while maybe lacking a bit of a risqué edge, is a clear sign that the Bread Ladies have a business on the rise.

Rosser and Bright bought the Marketplace Bakery, formerly in Louisville, in 2007 and moved to their present storefront kitchen at 1515 Main Street in Longmont about 18 months ago. They have a small retail operation in which they sell their loaves and bags of buns as well as pies, jam and honey from local producers, but their primary business is supplying area eateries with bread baked to order.

“We don’t stock bread; it’s all made to order. Every restaurant has something we do custom for them.”

“What sets us apart is we do custom baking for restaurants,” Rosser said. “We don’t stock bread; it’s all made to order. Every restaurant has something we do custom for them.” The Cuban Fusion food truck folks, for example, had an old recipe that had been in the family for years that Marketplace replicated for them. “That’s not something the big bakeries are willing to do,” Rosser said. They even dip into a 32-year-old starter for their sourdough breads that came with the business.

One of their newer accounts, the Organic Sandwich Company at 16th and Pearl streets in Boulder, prompted Rosser and Bright to source out organic ingredients in order to meet the requirements of the startup organic sandwich company. Marketplace complied and now supplies much of their bread. (And FYI, the Turkey and Bacon Jam sandwich will make your head explode it’s that good.)

Around the corner at 1114 Francis Street in the Good Eats Grill (recently named Best New Longmont Restaurant), owner Kelly Jorgenson says that Marketplace Bakery’s stellar customer service was one reason they got her business. The other was the substantial buns she uses for her award-winning burgers.

“They are different; they’re heartier, not like air,” Jorgenson said of the buns. “They’re on the artisan side. Great flavor and sturdy.”

“I used to be an artist and musician, so I need a creative outlet for my brain. Baking supplies that.”

Of the more than 30 clients that Marketplace bakes for, the Blue Parrot in Louisville is by far their oldest and biggest. They’ve been making table rolls for the iconic Louisville eatery for decades. But as their reputation for having nice, hearty buns grows, so, too, will their kitchen.

“We could use two more ovens,” Rosser said. “And as we grow, we’ll need to hire more employees.” Bright said that they are also looking for a local provider of butter to sell in their shop and that compound butters – one incorporating honey, garlic and jalapenos – aren’t far off.

That Marketplace has earned a spot in the hearts of their customers is no surprise, Rosser and Bright clearly enjoy what they do. “I don’t get tired of this,” Rosser said. “I used to be an artist and musician, so I need a creative outlet for my brain. Baking supplies that.”