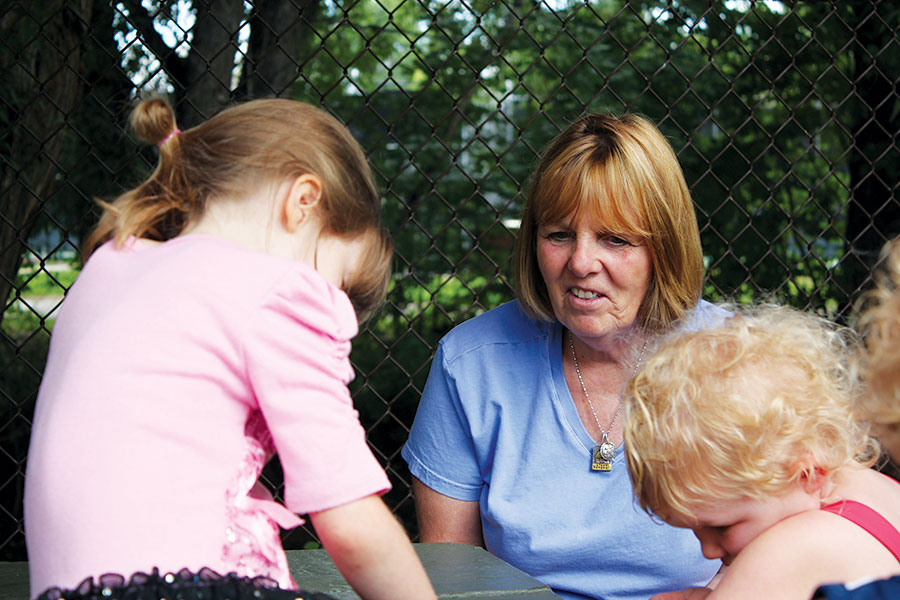 The Dream Makers quaint classroom was eerily quiet, like the soothing calm just before a summer storm. The preschool’s three teachers took the time to prep for their second day of Spy Camp, hiding clues on bookshelves, under toys and even under a rock in a fish tank complete with a giant gold fish. T

The two small rooms had been overrun by the theme of the week. One, which features a play loft and buckets of both educational and enjoyable toys, was roped off with thin red string creating a laser affect while the theme to “The Pink Panther” boomed out of a small Bluetooth speaker. The other was much more tame, with clues hidden among the multiple arts and crafts stations riddled along the walls.

“We want the kids to have fun while they are here,” Deb Gedenberg, creator and owner of Dream Makers, said. “We create a balance of fun, education and structure. We know the importance of each of those, and want to prepare these children for what is coming in a few short years.”

Dream Makers is a preschool in Boulder that focuses on preparing kids for elementary school. With a 5:1 student to teacher ratio, the school focuses on the social, educational and structural development of children ages two to five. It’s something that Gedenberg felt was a necessity after a few short years working for the school system.

Gedenberg started her career in education nearly two decades ago when she accepted a position with the kindergarten enrichment program. It was during those four years that she realized a lot of the children weren’t ready for school.

“Some of the kids would just come in and sit by themselves, they would cry, they would be aggressive, some would even fall asleep,” Gedenberg said. “They weren’t ready for school. And with the pressure we put on kids in school there wasn’t enough time to integrate them socially while they were catching up on the lessons.”

Gedenberg decided to leave the kindergarten enrichment program and start something completely her own. Combining the learning styles of Waldorf, Montessori, and others Dream Makers was born. After the first year however, Gedenberg reassessed what worked and what didn’t. Now, fifteen years later she continues to integrate new philosophies while staying true to her original mission: prepping her students for long structured days, an abundance of work and the pressure of social integration.

Her approach is simple. Let the kids have fun, while participating in educational activities.

Students are able to flow freely between two classrooms inside and the outdoor, creek side play area complete with a lemonade stand, a kiddie pool, tricycles and a climbing structure built from displaced rocks, courtesy of 2013’s flood.

Throughout the day, the students, which are all integrated together regardless of age, are given ample time to play and socialize alongside the structured daily lessons that include music, art, writing, German, cooking, math and physical activity.

During the summer, the school stays open but is treated as a camp of sorts. Each week a new theme is featured, giving the students a different cultural experience.

“We really do the best we can to help these children succeed,” Gedenberg said. “I’ve heard positive feedback from most of the parents that bring their kids here.” 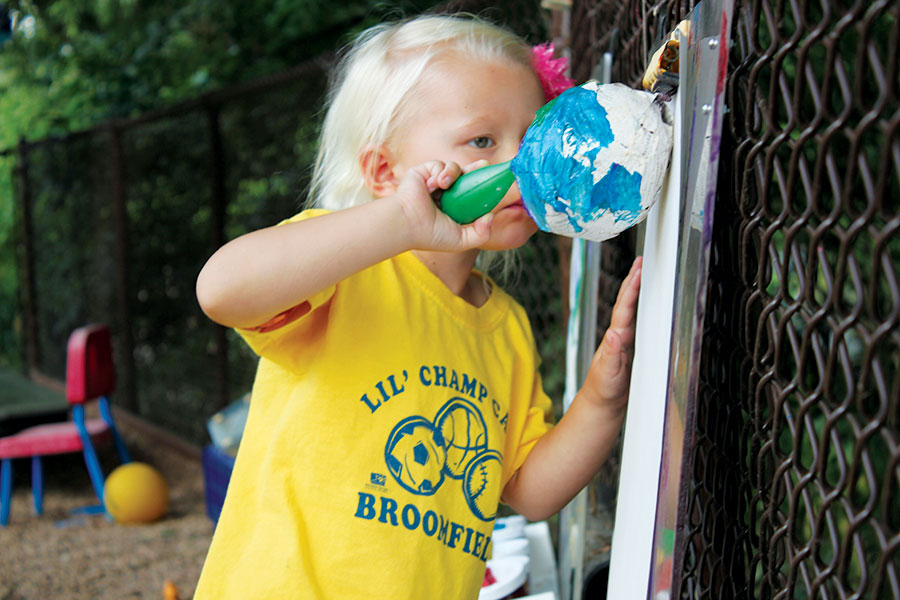 For Justine Allison, Dream Makers is less like a school, resembling more of a family of people coming together with one common goal.

Allison was one of the first moms to drop off her two kids, Lucien and Tristan, at spy camp. Lucien attended Dream Makers before he started kindergarten at Crest View elementary.

From the get go, Lucien was bombarded with work. Every night he came home with math and reading homework, after sitting in his desk for hours. Allison recalled Lucien’s stories of the other students skipping lunch to go play at recess. To her, the workload was, and continues to be, too much for such a young boy.

“He would come home and be completely exhausted,” Allison said. “I could read it all over his face, but we still had to sit down and work through his homework. If I could afford it, he would be put in a Waldorf school.”

Waldorf schools are play-based characterized by a predictable structure, providing children with a dependable routine, such as certain days of the week for set activities like baking or gardening, as well as mixed-age classrooms with the same teacher for multiple years.

And for parents, such as Allison, it’s hard to sit back and watch children become a ghost of who they once were. As the workload continually grows, parents have noticed their children becoming withdrawn, sporting an exhausted demeanor and lacking the energy to be a kid even after school is out.

“It’s unreal the amount of work our kids are forced to do in school,” Allison said. “I bring both my boys here because not only does it help prepare them socially and mentally, but it’s also educational. For example, Lucien learned to spell his name by writing it in paint, or with shaving cream. To me, that’s the best way to go.”

But to continue on with nontraditional types of education after the toddler years is expensive, and out of the question for a lot of families. So it’s off to public school in the fall, where even some teachers are abandoning ship.

Amy Field, a fairly recent college graduate, started out her career in education teaching fifth grade at a public school. Her passion for education however seemed to slip further and further away from her heart, and seep itself slowly into the dark part of her mind. She had only been teaching for a year, and she was already burnt out.

“I would have kids come into the fifth grade when they were still working at a third grade level,” Field said. “But I had to follow the curriculum and test them on things that were nearly impossible for them to understand. It was heartbreaking.”

Field left teaching at public school after her first year. She moved on to teach a Montessori elementary. Montessori, developed by Maria Montessori in Rome in the early 1900s, is child-centered, with teachers serving as guides. The students learn through play, or problem solving. And for Field, it was a match.

Unlike public schools, most Montessori schools aren’t forced to take standardized tests. This is something that Field said lowers the level of stress on both the students and the teachers. Her time at public school carried a totally different mindset, where the focus was meeting test score criteria, and forgetting about the child.

“I would go home from work and just cry some days,” Field said.

“I would go home from work and just cry some days,”Amy Field

For Boulder Valley School District, the work is worth it as the third grade class’s test scores for the district are nearly 10 percent higher than the surrounding areas. But Field feels that the pressure isn’t worth the higher scores, and it is this reason that she will not go back to teaching public school. As she continues teaching at a Montessori school, Field will undergo three summers of training, which is a testament to her commitment and beliefs in the Montessori school.

But not all parents, or teachers, share the same outlook on homework. For DeAndra Arndt, homework is something that lets her know just what her three elementary school children are learning on a day-to-day basis and a way to reinforce the lesson.

Arndt enrolled her children into the Rocky Mountain Christian Academy in Niwot. The school was a good fit, meeting Arndt’s needs for the first three and a half years that she kept her children enrolled. Last year, however, when the school changed their policy and curriculum for kindergarten through second grade, Arndt began to question the longevity of her children’s stay at the academy. The curriculum switched over to more of a discovery based method as opposed to the more traditional approach.

“They stopped sending homework home, which to me was extreme,” Arndt said. “So we left in December, and started researching every Christian private school in northern Colorado.”

The family finally decided on Longmont Christian in Longmont. The school met Arndt’s criteria, maintained a more traditional style of education and had room for all three of her children.

The Arndt’s wanted to keep their children in a private school at least until middle school. Even though the $13,000 out of pocket to attend a private school restricts them from taking family vacations, or having extra cash, the importance of the quality of education comes first. Finding the school with the perfect balance of quality and quantity wasn’t easy.

“Going on nature walks and exploring nature is great, but if this is the only teaching style your exposing to my second grader, I have a problem with it,” Arndt said. “There should be an equal part of creativity, and equal part fact driven approach.”

But, how far do the efforts put in by places similar to Dream Makers, such as full day kindergarten, really take these students?

Since 1977, the percentage of kindergartners enrolled in full-day programs has nearly tripled, increasing from 28 to 77 percent between 1977 and 2013. Overall, these students are more likely to o devote time every day to reading, mathematics, and social studies.

Since 1977, the percentage of kindergartners enrolled in full-day programs has nearly tripled, increasing from 28 to 77 percent between 1977 and 2013.

These programs also allow teachers more time to promote formal and informal learning, reduce the number of transitions in a child’s day, and allows children to get used to a schedule similar to that which they will have in first grade.

There are very few conclusive results on what these programs do long term, however. A nationally representative study, using data from the Early Childhood Longitudinal Survey-Kindergarten Cohort, found that academic gains of full-day programs had largely disappeared by the end of first grade. Other studies have shown that students who attended full day kindergarten showed better testing results into the second grade.

For Sophie Pinnell, a fifth grader at Whittier Elementary in Boulder, her time at Dream Makers, and going to a full day kindergarten, the most prominent take away from these programs was the social development they helped her develop.

“Dream Makers made me feel comfortable making friends, and I wasn’t scared to go up and talk to the other kids at school,” Pinnell said after she demonstrated how to use a bubble wand to the toddlers crowding around her. Pinnell is spending her summer helping the three teachers at Dream Makers. “They call me a ‘counselor in training,’ and it’s actually a lot of fun. I get to practice responsibility, while still having fun. It’s as fun as when I was a student, and I’m still learning new things.” 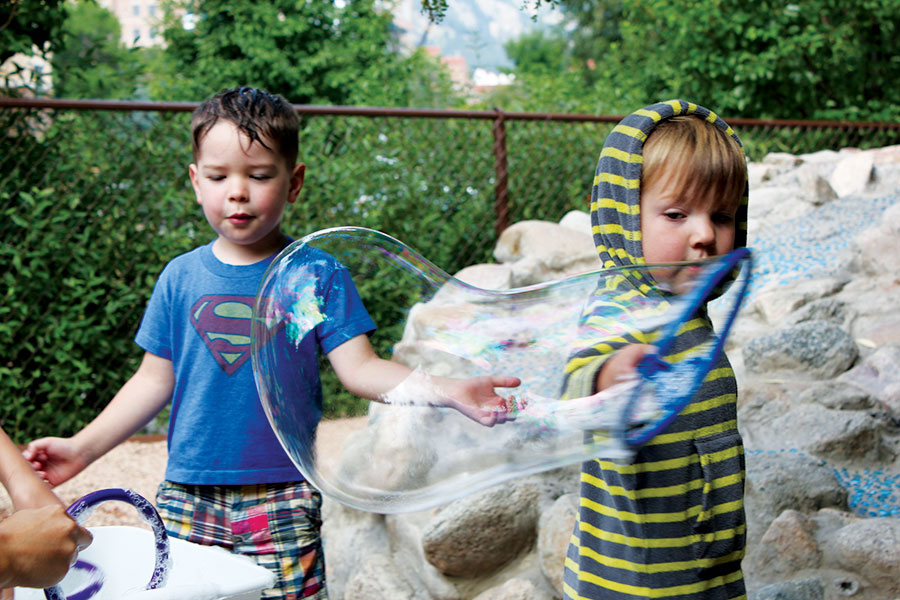 This is something Gedenberg recognizes, and strives to achieve with Dream Makers. As the children filed in, ran the obstacle course and moved on to the patio to enjoy the early summer heat before it became unbearable, Gedenberg sat with two young girls counting out pebbles as they created a silhouette of a fish.

“After 15 years of working with children, you learn a thing or two about how far you can push them, and how far they are willing to get pushed,” Gedenberg said. “It’s a fine line that you have to learn to straddle.”