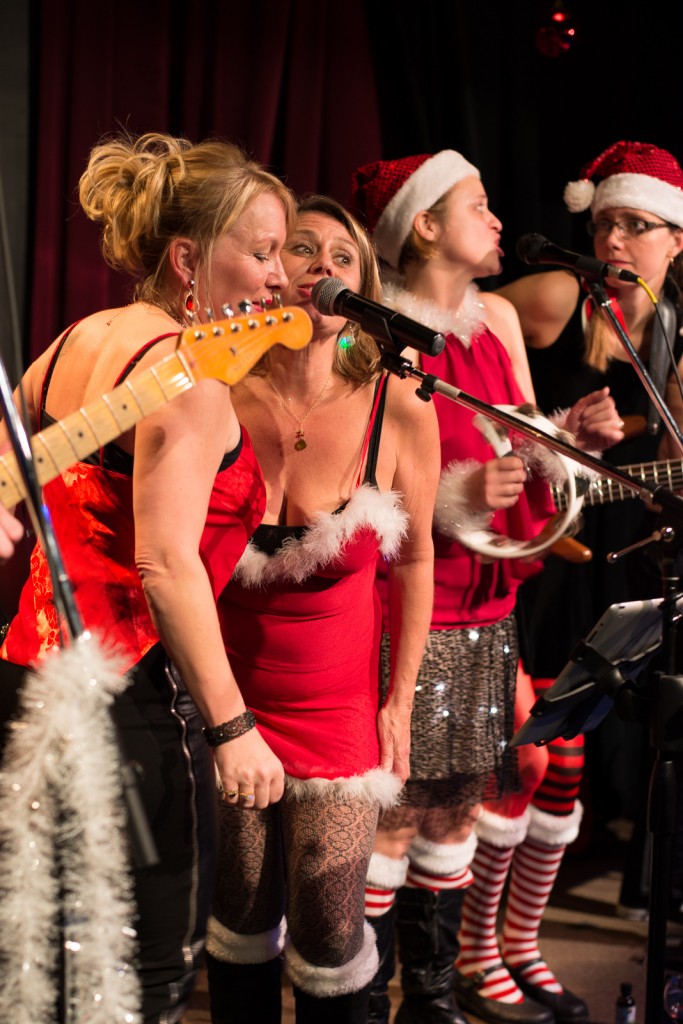 All-female cover band Girls On Top performs its annual Naughty Elves show at Nissi’s in December, so we spoke to one of them, Kristen Henry…

Yellow Scene: When did the band form and what was the mission?

Kristen Henry: We are 17 years old, so almost legal. It’s a funny story – we formed out of the fact that, at the time, the three main singers were all actors in a play called Quilters, which was about frontier women. It’s about as far away from Girls On Top as it can be. The bass player in that play had this dream of putting together a song and back then it was much more 1960s – we expanded to 1970s and ‘80s now. He picked his three favorite actresses in the play and said ‘let’s do this thing.’ The name came to him in a dream. We have a strong relationship with each other and that’s carried through the years. We didn’t know what we were going to do when we got together. It was a first-time experience for a lot of us, but it’s grown into something worth sticking with.

KH: We play covers, but we don’t ever want to be a typical in-the-box cover band. We cover Motown songs, Rand B, the classic stuff. While all of our songs are true in intent to the originals, the personalities of the people in the band have shaped how the songs play out. They’re all kind of arranged around everybody’s personal skillsets and personalities. It’s not always a tribute band where we’re taking on the personnas and the exact inflections of the music we’re covering – there’s always some of us in it. That differs from song to song.

KH: We love Nissi’s. It is a great venue. What they’ve done with the décor and the stage arrangement is exquisite. They’ve turned it into such a jewel. It’s such a pleasure to have a venue like that here in Boulder County. We’re not young kids up until 4 a.m. – we’ve got kids, jobs and lives, so it’s nice to have this place close to home where we can play, it’s fun, but it’s also elegent. It’s a pleasure to have a place like Nissi’s. I wish them a long life.

KH: What can we expect from the Naughty Elves show? Expect the unexpected. We pride ourselves on being very spontaneous and spunky, so the Naughty Elves show is sort of like going to Martha Stewart’s house for tree-trimming and tree-lighting and unfortunately she made the egg-nog a little too strong, so you’re the one getting lit up and the tree ends up being our bass player. But she looks good in tinsel.

YS: When that show’s done, what’s next?

KH: Every year, we take a little bit of a hiatus when one of our singers winters in Florida. We’re going to be hitting up some new venues in Boulder County and returning to some of our old friends. We’ll be coming back out in February or March for our spring reawakening. So a little bit of hibernation. We’re old, we need to regroup.