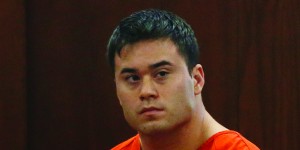 Daniel Holtzclaw, the former police officer accused of using his position of power to commit a string of sexual assaults against black women, was found guilty by a jury in Oklahoma City.

In June 2014, a 57-year-old woman came forward reporting that Holtzclaw had sexually assaulted her during a traffic stop. The allegation prompted an investigation into related incidents of sexual violence committed by an officer who matched Holtzclaw’s description. With the aid of the GPS tracking data from his patrol car, detectives determined he was the one behind the crimes, and was fired in January 2015.

Although the former officer plead not guilty, the controversial all-white jury found him guilty on five counts of rape and 13 other counts of sexual assault, and faces a sentence of more than 200 years.

While justice was served on Holtzclaw’s case, many officers are able to get away with mistreating and sexually abusing women. A recent investigation by the Associated Press found that hundreds of American police officers have lost their jobs as a result of sexual misconduct on duty. It uncovered that about 1,000 law enforcement officials were taken off the force for charges that included sexual assault and rape over the course of six years.

AP reported: “Even as cases around the country have sparked a national conversation about excessive force by police, sexual misconduct by officers has largely escaped widespread notice due to a patchwork of laws, piecemeal reporting and victims frequently reluctant to come forward because of their vulnerabilities—they often are young, poor, struggling with addiction or plagued by their own checkered pasts.”

This is true for Holtzclaw’s victims. His crimes follow several distinct patterns. Although no particular ages were targeted, many of the women were suspected of crimes such as drug use or prostitution. All of the women were black. Some of them claimed that he would pardon their crimes if they complied with performing sexual acts. He targeted women who he thought would steer clear of reporting him.

But Holtzclaw’s abuse is not the only problem here. No one is talking about this issue. There has been no outrage, or mass posting on Facebook. The coverage in media gets buried, or overlooked. At a time when report of black violence against black women and men flood headlines across America, why is this one pushed to the back burner? It shows that as a nation, we still don’t know how to talk about rape or sexual assault, especially when the accusations come from black women, who have been historically exploited and subjected to sexual violence by those in positions of power.

But this verdict is ground breaking, and can hold more power if we only pay attention to it. Out of the thousands of police officers released from their jobs for sexual misconduct, only a handful were faced with criminal charges, and even fewer were convicted. Holtzclaw’s conviction should be a wake up call that if we stop fearing the talk about rape, the men who commit these atrocious acts will be held accountable.

Holtzclaw has a formal sentencing date set for January 21.