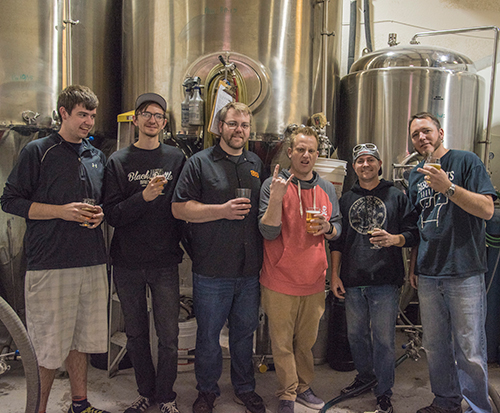 If you’re going to join forces and brew beer with people that some would call competitors, it helps to bring a compatible mindset to the job. And for the brewers behind Broomfield’s Big Choice Brewing and Fort Collins’ Black Bottle Brewing, that mindset has its roots in punk rock. So it’s no surprise that the similar attitudes, musical tastes and energy that came together on a sunny but brisk late February day produced a load of laughs, war stories, mosh pit memories and some righteous beer.

Time and a (likely) sold out crowd of beer enthusiasts will tell if the Split 7 Inch Chocolate Orange Cream Ale that head brewers Nathanial Miller of Big Choice and Sean Nook of Black Bottle and their respective crews put together will win the day. They are entering this rich and smooth concoction, reminiscent of a chocolate egg cream straight out of Brooklyn, in the third annual Collaboration Fest at Mile High Stadium on March 19.

More than 85 collaboration beers are being brewed for this year’s event and the nearly 150 breweries taking part include a who’s who of epic proportions. The rules (yes, there are rules) are simple: one of the two (or three or more) breweries has to be based in Colorado and a member of the Colorado Brewer’s Guild. The other(s) can be any of the other breweries that call Colorado home or wish they did. That’s why you get the likes of Delaware’s Dogfish Head teaming up with Denver’s Prost, Fort Collins’ Funkwerks latching on to Wicked Weed out of Asheville, N.C., and Grist going south to Koala San Brew out of Nova Lima, Brazil.

And judging from the banter and antics of the Black Bottle and Big Choice crews, this chance to get together and make something special was a good time.

“We love collaborating, and when you go somewhere else, you do a lot less work!” Nook said. “The best part is going back and forth with Nate on the recipe. But hanging out and drinking beer, that’s what it’s all about.”

This version of cream ale is going somewhat traditional with lager yeast fermented at warmer ale yeast temperatures to give the beer a smoother, creamy mouthfeel. And add to that the pound of vanilla beans (for the 7 barrel batch) for the fermentation, and this is going to be one smooth beer.

This one-off beer’s name, Split 7 Inch, has true punk rock origins. Back in the vinyl days, punk bands would get together and collaborate on a 7-inch disk, with one band putting one or two songs on one side and another band contributing the other side. Like the vinyl offering, Both sides bring their own character, personality and flavor to the beer.

There are dozens of big, amazing beers to be had at the Collaboration Fest. It’s the annual chance for brewers to let their freak flags fly with concoctions like albino stouts; single malt, single hops barleywines; beer aged in French, American and red wine barrels; big, massively hopped IPAs; as well as straight, classic styles.

For tickets and more information about Collaboration Fest and the beers and brewers you’ll find there, head over to collaborationfest.com.