Chowing Down at Spirit Hound 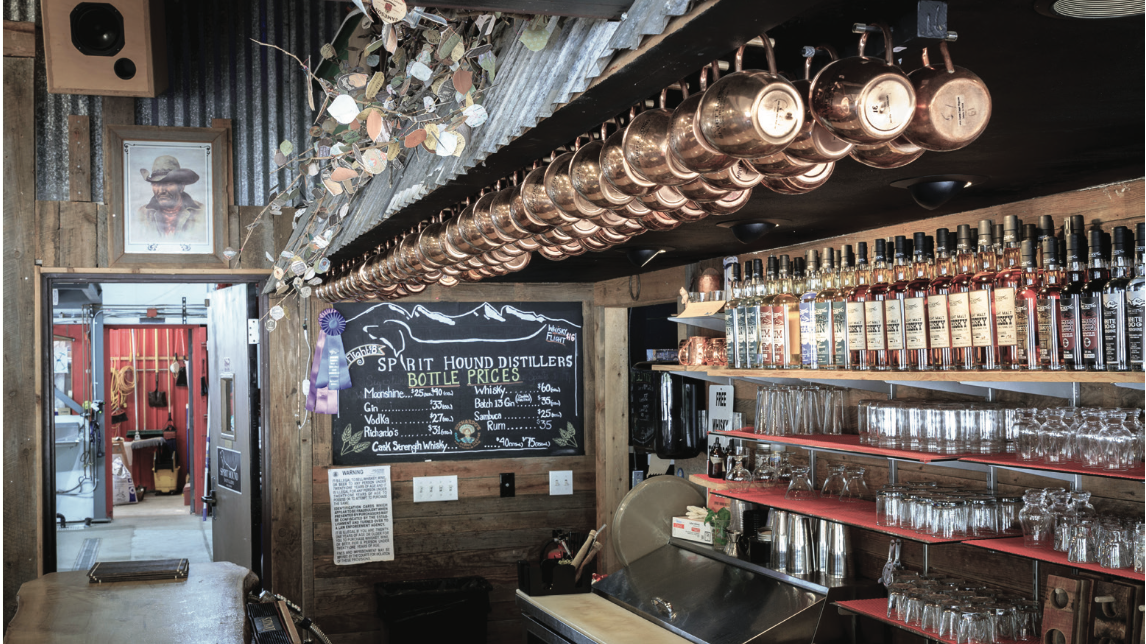 Dinner and drinks at one of Colorado’s best distilleries? Oh yes, count me in. By the time I arrived at Spirit Hound Distillers, the Lyons distillery was already alive with conversation. The mostly local crowd was spread throughout the small dining room, chattering at long picnic tables while waiting somewhat patiently for the next round of craft spirits.

Spirit Hound and Spice of Life partnered up for a four course pairing on November 1.

The two have long been friends – Spice of Life is a barrel owner. They were one of the first to invest in Spirit Hound, so to speak. When Spirit Hound was first launching, they gave local businesses and collaborators the opportunity to purchase a barrel as a way to raise funds. The level of collaboration between distiller and chef was apparent: each ingredient treated respectfully, each spirit paired thoughtfully and incorporated deliciously with ingredients that included the spirit itself. Cooking with liquor and then pairing it is a food trend I’ve been loving, but maybe I’m just a lush.

We started with a little hors d’oeuvre of gin-cured salmon with con ted golden beets, watercress and pickled jalapen?o and arbolis with a beet coulis on a crostini paired with the same gin used to cure the salmon. While gin is typically my go-to drink for spring and summer, the cask-aged gin exploded with flavors of allspice, nutmeg and a little bit of Christmas, which had me reconsidering my seasonal positioning on the drink. 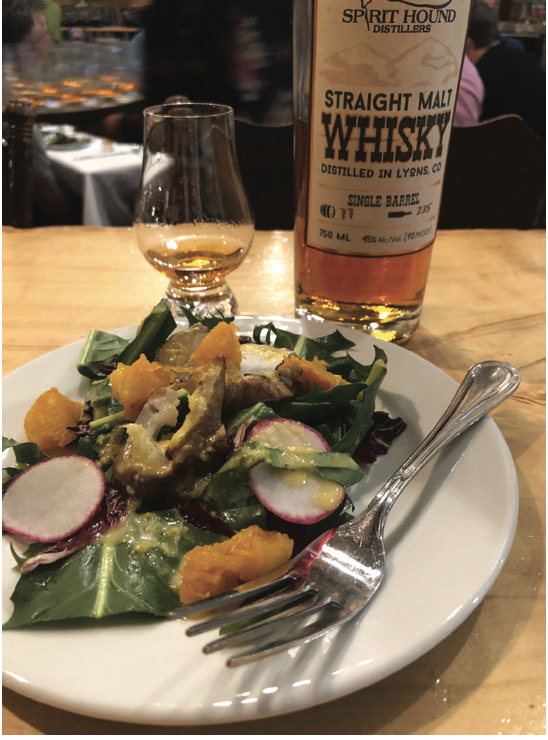 Personally, I love dandelion greens, but I know for some people the bitter greens can be off putting – kind of like a jealous friend. The smoky, slightly floral barrel 77 whisky balanced some of the biting of the greens. The roasted pumpkin and sunchokes warmed up the dish, which had a bright finish thanks to the whiskey vinaigrette.

I’ve never thought about poaching carrots in whiskey, but after the second course of a consummately tender sous vide pork tenderloin, barley risotto and these baby carrots, I was ready to start poaching everything in whiskey. This was lovingly paired with their barrel 81 whiskey, which goes down smooth thanks to a sweet toffee and caramel finish.

The barrels at Spirit Hound are number sequentially, although it doesn’t always mean they are opened sequentially.

Some spirits will age longer than others, like the barrel 13 whiskey, which aged for four years and sold out in three days. Side note: if you have a bottle and want to give our editors a taste, slide into our inbox.

By dessert, we were all family; that’s the magic of dancing with spirits. Loosened up by liquor, mellifluous conversation rolled on as we cut into the pineapple upside down cake with a barrel 81 glaze. The warning for the rum soaked cherry came a bit late for some. The maraschino had soaked in the Spirit Hound’s Mountain Bum Rum for 24 hours. It was essentially a shot in cherry form. The Mountain Bum Rum is made from 50 percent Caribbean molasses called the Black Pearl and is fermented with a yeast from the Caribbean. It might be made for mountaineers, but there were plenty of pirate jokes going around, the rum-soaked cherry on top of a great evening.

Spirit Hound’s first pairing was a delicious good time. It’s definitely something they will do again, said Chad Melis, though it might be an annual thing. But if you missed it this year, the distillers have some other great off-season events planned for early next year including a cheese and spirits pairing, a “meet the distiller” whiskey tasting, and a crawfish boil.