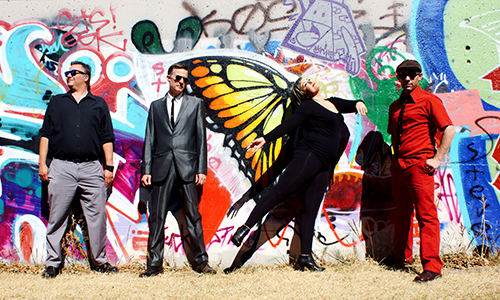 The Jekylls at the Lion’s Lair

Guitar-driven, soul-tinged surf rockers The Jekylls (www.thejekylls.com) are a welcome addition to a Colorado musical landscape saturated in jammy pick sessions. The quartet drops their sophomore album, The One I Want, The One I Need, at a release party at the Lion’s Lair (2022 E Colfax Ave, Denver) on March 19. Frontwoman Eryn DeSomer Hoerig takes a few moments to clue in the unindoctrinated.

YS: Tell us the story of how the Jekylls came to exist.

EH: I started thinking about forming the Jekylls in 2011 — I had been playing in a country(ish) sounding band for several years, and I kept writing songs that didn’t fit with that genre but I had no outlet for them. I reached out to Tony (Asnicar, guitar) and Graham (Haworth, Drums), who were also country musicians about playing with me and they were all into the idea — Keith (Hoerig, bass) gets/has to play with me because we’re married. We all got together in August of 2011 and it was really fun from the beginning — we’d all been in bands for so long that none of us were too nervous about putting ideas out there right away. At first I think it was hard for us to steer clear of having at least a little country/ Americana sound in our music, but on this new album I feel like we’ve really found a sound that stands apart from work we’ve done in the past.

YS: Talk about the album — how your songwriting process works and what led to the selection of these particular tunes?

EH: I think this album is a new, fun direction for us, and sounds more like where I wanted to go musically in the first place. It’s got much more pop/rock influence than our first release. We usually write songs as a group — one of us brings in an idea for a song and then the rest of us build on it. I’m usually the one who writes the lyrics, but everyone offers input and sometimes we write lyrics together. Tony contributes some brilliant lyrics on this album. One of the big changes on this release was that our keyboardist and percussionist decided to leave the band in early 2015.  We love Jody (Rodney) and we loved playing with her, but rather than be sad about our loss, we decided to take it as an opportunity to become really strong as a four-piece.  So far that’s worked out really well.  Also we had keyboardist Brett Bryant helping us out on the recording and I can’t say enough about positive things about how much he added to our songs. As far as selecting these particular tunes, it’s more of a “we have enough songs, let’s go make a record.”  If we don’t like something we’re writing or playing, it doesn’t stick around for long.

YS: What are the three most important things you want my readers to know about The Jekylls?
EH:

The Samples at Nissis
Just last year, Westword called The Samples’ release America (Honey Badger Records, 2014),“the best comeback album of the year.” A 14-track exploration of the almost-30-year-old act’s jammy-pop-jazz sound at its best, the album marks an eleventh notch on their belt, and helped breathe new life into their steady touring schedule, which brings them to Nissis on April 8 at 7:30 p.m. (tickets are $20). We caught up with Andy Bercaw, The Samples’ bass player and co-owner of the Oriental Theater in Denver, who joined the band three years ago.

YS: What was it like coming into a band with so much history, so late in the game?
AB: First, it absolutely felt great to be offered the position as bass player for The Samples. When I moved to Colorado 22 years ago, the three bands that everyone talked about were Big Head Todd, Leftover Salmon and The Samples. So having the chance to play with them for the last three years has been great. I’m answering these questions in a hotel in Miami Florida as we are getting ready to board a ship for the Lebrewski cruise — stacked with killer bands! The Samples continue to tour and the crowds and opportunities stay strong. This is a great Renaissance period for bands out of the ’90s. Glad to be part of it.

YS: Do you consider yourself more of a hired gun? Or do you have some freedom to contribute to the creative process?

AB: The first year with the band I was definitely a hired gun, mostly on a sub/gig-by-gig basis. After that, I moved into a full-time position. I also tour manage the band which has made the gig feel more real to me. This position gives me a lot of flexibility and a voice when it comes to the band. Sean Kelly (founder, frontman) is great to work with and always allows the players to offer input on set lists and he gives us total creative license on stage.

YS: Get out your crystal ball: What are a few of the acts you think will blow up from Colorado that no one has heard of yet?

AB: Man, Denver is bursting at the seams with amazingly talented bands right now. Owning the Oriental Theater gives me a really unique opportunity to experience so many great acts on a regular basis. Right now I really dig The Yawpers. They are cracking hard and fast

Few bassists in Colorado have as illustrious a local resume as Donnie Jeroms. Not to date him, but he started playing in bands in Colorado back when the state still had “3.2 rooms.” Ask your grandparents about that one. These days, Donnie’s keeping the rhythm on lock down with Ethyl and the Regulars, a honky tonkabilly band playing Oskar Blues in Lyons on March 26 at 8:30 p.m.. (www.oskarblues.com for more info).  We had a quick chat…

YS:  You’ve played with a lot of groups over the years. Can you remember them all?

YS: Tell me how Ethyl & The Regulars came to exist
DJ: Myself and longtime friend and bandmate, Jeff Yeary, decided we needed to start our own band. We met a great guitar player that had  just moved here from Indianapolis, Hank Hays. We started out as a four piece honky-tonk outfit and Tim Whitlock, a great pedal steel  player, came to see us and asked to join the band which we excitedly replied, yes.

The name Ethyl and the Regulars came from an exhaustive search until one day I looked at the back of Wayne Hancock record. He was sitting between two gas pumps and the name just came to me. In 2013, changes in members lives forced changes in the band, although we are all still great friends. Tim and I have forged on as musicians and songwriters under the same banner. We are always growing and adapting. The current talented-lineup features: Heidi Hamill lead vocals; Nick Amodeo, guitar; Chris Budin, drums; Tim Whitlock, pedal steel, guitar, mandolin and vocals; and me on upright bass and vocals.

YS: What’s your favorite song you play and why?
DJ: Tough question, especially now with Heidi in the band, the answer could change daily. I would have to say a song I wrote called “I’m Running Late.” It really swings and I love to listen to the interplay between the pedal steel and guitar.