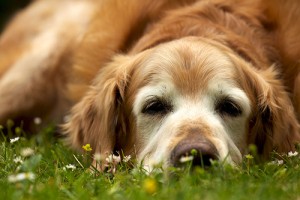 In keeping with our canine-loving theme this issue, we thought it’d be a handy opportunity to explore the relationship between our favorite four legged companions and our favorite five-bladed plant in this month’s Blunt Talk column.

With marijuana legalization becoming mainstream in dog-loving Colorado, more and more close encounters are being reported between dogs and pot, but research suggests this isn’t the first time the two species have gotten to know each other.  Scientists have found that dogs and cannabis have co-existed for at least as long as both have been domesticated.  For both beloved life forms, a close relationship with humans seems to have started to develop somewhere in Central Asia, and their co-domestication was certain by at least 6,000 years ago.

That time your roommate’s dog ate his stash in college was probably not the first pairing of pot and pet, but that begs the question, what does herb do to dogs?

Can Dogs Actually Get High?

Dogs most certainly feel the effects of cannabis, but can’t appreciate it the way humans can.  Being higher vertebrate mammals, dogs have a fully developed Endocannabinoid System (ECS), the biological system that cannabis interacts with.  Like humans – and every creature that’s evolved since primordial sea sponges about 500 million years ago – dogs have CB1 and CB2 receptors in their bodies that interact with THC and the major cannabinoids, and are effectively modulated by CBD and other constituents.  According to current research, dogs have CB1 receptors in their intestines and brains like we do, but they’ve also been found in their major and minor hair follicles, which some researchers believe is a clue that indicates the importance of herb to your dog’s health.  But before you go feeding Rex some Trainwreck, consider some of the warnings veterinarians and animal health organizations have been issuing.

According to Dr. Sarah Brandon of Canna Companion, a company that provides cannabis medicine for pets, dogs experience “all the pros and cons of cannabis the same as humans.  They do get high if enough THC is administered, and they generally don’t like it,” because with their already-heightened senses, the increase in sensory perceptions is probably overwhelming.  Intoxicated dogs can “experience wobbliness and other gait abnormalities, and this can really scare them,” and poochie-paranoia isn’t all that different from human paranoia once it gets going, but with the added stress that dogs have no sense of why their cognition is different – as opposed to humans, who may vaguely remember eating that infused chocolate bar some hours ago – which can increase their panicked response.

The good news, though, is that cannabis is actually as non-lethal for dogs as it is for humans.  In fact, the 2002 study by the ASPCA that studied 250 cases of marijuana intoxication in pets found no deaths caused by cannabis or its constituents, and established no median lethal dosage.  Some YS readers may remember the two Labradors were found dead here in Colorado back in 2000 with cannabis-infused butter their digestive tracts, though no definite link was established between the cannabis and the unfortunate fatalities.

While it’s unlikely that your dog can be fatally poisoned by cannabis, there are still definite disruptions potent pot can cause to canine health and safety, such anxiety, including panting and agitation; abnormal heart rhythms or breathing; extreme lethargy, sleepiness, or “laziness”; seriously impaired balance, including staggering, stumbling, or falling; drooling, vomiting, or diarrhea; loss of trained or voluntary bowel or bladder control; and extreme responses to sensory stimulation, including trembling or jerking of the head or extremities.  The intensity of these negative responses depends on the dose and the size of the dog, and in higher dose, they can be terrifying to both the pet and the associated human.

These negative symptoms are the result of the dog ingesting the classic ?9-THC that gets us high, and which is created when pot is burned or cooked.  In raw herb, whether from a live plant or a jar, where this compound is still in its unheated form (THC-A), it doesn’t have the same intense psychoactive effect, while other cannabinoid and terpene compounds are actually earning reputations for helping hounds, not hurting them.

While there are certainly concerns and risks to be avoided when we’re talking dogs and cannabis, there is also a great deal of promise in the field of veterinary cannabis.  For the same reasons that dogs’ endocannabinoid systems can yield undesired effects at high doses, more careful implementation is showing huge promise in increasing canine quality of life and even treating common maladies and ailments in dogs.

Prominent Los Angeles veterinary doctor Doug Kramer – known in his field as the “Vet Guru” until his death in 2013 – was a vocal advocate of the appropriate use of cannabis to relieve animals.  Though the American Veterinary Medical Association hasn’t given any green light to the treatment, Kramer and dozens of vets in states that offer legal access recommend cannabis to improve dogs’ quality of life, especially as they age.

Marijuana is promising for treating a range of symptoms in pets, starting with basic pain and discomfort, especially the type of joint pain experienced by older dogs.  Experienced vets recommend cannabis – especially high CBD/low THC treatments – for cases of canine anxiety and restlessness, and anecdotal evidence suggests that these remedies can chill-out high strung pets without introducing the possibility of intoxication that might further panic a pooch.  Doggie doctors are also recommending marijuana treatments to increase older dogs’ appetites, to ease inflamed bowels, to treat all forms of canine seizures, and to fight canine cancer and diminish the side effects of cancer treatments.  Breed-specific problems, including eye problems like cataracts and glaucoma; skin irritations, sensitivities and rashes; and metabolic problems like obesity and canine diabetes also show promising responses to cannabis-based treatments.

Of Canines and Cannabis

So there you have it—Yellow Scene is the introductory guide to Canines and Cannabis.  To recap, we found that your dog can get high just like you, but can’t understand or appreciate what’s going on in the same way.  High doses of herb can cause all sorts of issues, so there’s not much ground to stand on when it comes to recreational marijuana for Man’s Best Friend.  But because dogs have endocannabinoid systems very similar to our own, veterinary medical marijuana can be extremely effective in relieving some of the most common ailments dogs deal with.  Ultimately, it’s important to know what you’re giving your dog, for what reason, and in what dosage, so pet owners should remain vigilant.  But as People for the Ethical Treatment of Animals President Ingrid Newkirk explained in announcing PETA’s support of the administration of medical marijuana to pets, “Our position is that anything that can help animals – if it’s truly, properly administered in the right amount [and] can relieve a dog’s pain – then they should be given the same consideration that humans in pain are given.”