Timing Your Exercise with an App is App-auling 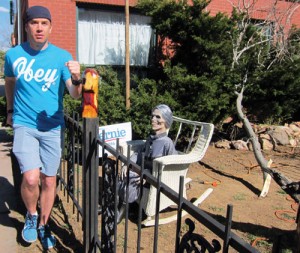 SUB: Strava Lets you Compete on Your Runs and Rides. This Writer Won’t Have It.

Humans used to stay fit because they wandered outside when the weather was pleasant and didn’t return home til they were tired. Those days are as dead as the Neanderthals; now, we exercise with purpose, the way we build canals or launch new digital products.

Speaking of which: have you guys heard of Strava? It’s an app. It tracks and times your bike rides or runs and uploads a synopsis onto their social media website. There’s a map of the route with the time that it took, visible to the “friends” you’ve “shared” your journey with. You name your outing, perhaps “Reinvigorating Run in Springs Opalescent Glow,” and then “friends” can click on a “thumbs ups” button and feel like a part of it, without having to struggle out of their recliners to see Spring’s Opalescence for themselves. There’s a tab for comments, but very few seem to comment. What’s there to say? “You really did run that distance.” It’s not exactly juicy gossip, is it?

The best places for Strava are on the classic runs and rides around here, so that the spandex brahs (and a good number of spandex chicahs) who sprint up to the Flatirons or bike out to Niwot can compare times and ride lengths during what Strava calls “challenges,” all of which, as any Freudian knows, is really a subtle way of comparing the lengths of their … strides.

I’m not a competitor; I let everyone go ahead of me at the deli counter. But, as the Current Yellow Scene Magazine Outdoors and Exercise Columnist, I am trying to wedge more exercise into my everyday life. So, hoping it would motivate, I took the Strava app out for a test run with Spoonie (the girlfriend). Our strategy was to use it places no real athlete ever would, and become BoCo champions of the Afternoon Strolls and Heartening Walks. We turned Strava on during a brisk walk around Wonderland Lake, north of Boulder, and we had good intentions, but our record-breaking pace was marred by a few unforeseen snags, like when Spoonie (the girlfriend) had to sit on a park bench to rest her hurting feet. They hurt because she’d worn flats, even though I had asked her to wear sneakers because we were, you know, walking places, the memory of which I revived there on that park bench, which led her to remind me how sparingly I follow her wishes, such as her wish that I engage in conversation with her college roommate, who recently stayed at our house but with whom I can’t seem to connect and so I hide in the basement pretending to organize the camping equipment. We were delayed further by a herd of 10 white-tailed deer on the hillside. This obliterated our Strava interval, but gave us a moment to hold hands and forget about the sneakers-and-roommate tiff. Strava time: 1 mile in 19:00.

We’re just not built for Strava. We turned it on while walking from a ceramics shop on Pearl Street to a modern dance performance at the Dairy Center for the Arts, but we got caught up on the way talking to the lovely Lisa Fusillo about why we need to protect bees. Any bee discussion will always knock several minutes off any athletic endeavor. Strava time: 1 mile in 16:00.

Anyway, I feel like Strava misses the point, generally speaking. The world is only partly physical and mostly mental. And I’d like to see a few Strava “challenges” for things that are, in their own way, even more Boulder County, even more 2016, even more taxing. Things like:

The Trash Bin Sprint. This is a variation on the old Suicide Sprints. It involves diligently dragging your trash bin, compost bin, and recycle bins to the street and angling them fastidiously parallel with the asphalt, then realizing that you’ve misremembered which day is Trash Day, so dragging trash bin, compost bin and recycle bins back to the house, then forgetting about the whole business of trash completely until, several days later, you’re woken up on the ACTUAL TRASH DAY by the beep beep beeping of the garbage truck, then sprinting and shuttling the trash bin, compost bin and recycle bins to the curb, slopping stinky Number Four yogurt tubs onto the neighbor’s lawn and spilling rotten egg shells and onto the sidewalk, all in time to watch the backside of the trash truck recede down the street, picking up the refuse of people who seem like the world’s luckiest folks. (Strava record: seven stubbed toes.)

The Alley Jog. This is a real jog, in two senses of the word jog. It occurs when there’s a street you want to ambulate down to fetch a cup of coffee or go watch the ducks, but there’s someone on that street you want to avoid. Maybe you once “borrowed” their shovel for three consecutive winters; maybe you swore you were in Phoenix and therefore couldn’t attend their church picnic, however much you’d’ve ABSOLUTELY LOVED to’ve eaten pale soggy coleslaw and chatted about Jesus. So you jog to minimize visible time, and you jog off the straight route, down dirt paths full of recycle bins stuffed with Bud Light cans and Merlot bottles, evidence both of your beloved neighbor’s unfortunate drinking problem and her struggling times in the Trash Bin Sprint. (Strava record: seven saved friendships, twelve church picnics skipped.)

So Strava could be improved, is my point. But, really now, what is this need to quantify everything, compete in everything? I read all this competition is literally killing us; people see their friends’ boasts on Facebook about how they scaled Longs Peak in thirty-two minutes and they try to match it and they die in the effort of myocardial infarction or lightning or both. It’s not worth croaking for a Status Update. It doesn’t matter how many “likes” are at stake.

Our data is going to live forever in the clouds, but you and I might not. And if we spend our Earthly lives staring through shiny phones into other dimensions full of people we’re jealous of, we might set Strava records but we might miss out on life.

“Friend” me on Strava, my siblings. I’d like to see you. But, be aware: next time I mess around with exercise apps, I might set Strava to running and then tape my phone to the bottom of a city bus.