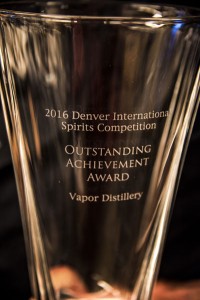 Ted Palmer owner and master distiller at Vapor Distillery is on an award binge. After having his Barrel Aged Gin take top honors at the 2015 World Gin Awards in London, England, Palmer was given the 2016 Denver International Spirits Competition’s Outstanding Achievement Award. Vapor owned almost every category they entered and took home five medals, including Double Gold (judges’ scores in the mid-90s or better) medals for their Arrosta Coffee Liqueur and their Ginskey Barrel Rested Gin.

Formerly Roundhouse Spirits, Palmer’s coffee liqueur has always been outstanding. He uses Gerry Leary’s Unseen Been coffee from Boulder and a process that makes for a rich, aromatic, flavorful liqueur unlike any you’ve ever tasted.

And if you’re looking for a fun open bluegrass jam, C-Bob’s Gin Joint Jam goes off every Thursday from 6-9 p.m. at the Vapor Tasting Room. Bring your mandolin, guitar, banjo or whatever you’re feeling good playin’ and head on out. They’re at 5311 Western Ave. Suite 180 (in the northeast quadrant of 55th and Arapahoe). vapordistillery.com

Will Run for Beer

If you’re even moderately in running shape, Avery’s 4th of July 4K is a great way to let your fleet feet earn you some beer. Your $35 registration at averybrewing.com/events gets you a shirt, post-race beer and breakfast. Proceeds from the race benefit the Richard Castro CU Track & Field Endowment Fund and the Boulder Road Runners.

An not only do you have that good proceeds juju going for you, but the overall male and female winners get their weight in beer. And that’s not all: Age group winners get two cases of Avery beer and 2nd and 3rd place age group placers get two six-packs of beer. And being that there are 14 age groups (broken into 5 year increments), that means more than 40 people are going home with some beer. If she can walk 4K, bring grandma! There’s an 80+ age bracket that’s just begging for some ripped octogenarian to walk away with a couple of cases.

The flat and fast course is a double loop around Nautilus Court, the Gunbarrel office park that Avery now calls home, and packet pickup is from 7-8:30 a.m. the morning of the race. So if you want to be the hero of your fireworks party, race your way to a couple of cases of Avery beer and share ’em with your friends.

It was just over 6 months ago that Oskar Blues announced that investment group Firemen Capital Partners purchased a stake in the Lyons/Longmont based brewery to the tune of up to nine figures. The money will help keep the brewery “nimble and aggressive” according to the official sources.

And just to prove how much so, Oskar Blues is celebrating the grand opening of its new Austin, Texas location on April 23 with a Burning Can (no justa) beer fest. The Drive-By Truckers are slated to play and yes, you’ll be able to sample beer from 30 other crafter breweries that sell their beer in cans. The Lyons Burning Can event is June 4 and given how that party has grown over the years, we can only imagine what Austin will be like. For all the info, go to burningcan.com .

Making Father’s Day Special for a Scotch lover [with photo]

So dad likes the good Scotch that’s as old as you are, how do you weigh in on Father’s Day when his favorite bottles will set you back a Benjamin plus? You get him some water to go with his single malt.

That’s right, Uisge Source Water of Scotland sells a three-pack of water from private springs in the three main distilling regions: Highland, Speyside and Islay. “The best water to add to your whisky is the water that made it,” says Blair Bowman, spokesman for Uisge Source. “There are distinct differences in the chemistry in the waters that go into making the whisky in those regions.”

Unlike the fine Scotch into which you’ll be dripping this water, you can get a set of three bottles from Amazon.uk for about $18, plus shipping. For the Scotch connoisseur who has everything, you’re pretty certain to score with this.

The wildly popular New Brew Fest (featuring craft breweries 5 years old and younger) is taking their event over to Prospect in Longmont. Details and an early May date aren’t yet cast in stone, but keep an eye on newbrewfest.com for details. In years past, the vibe of having only the new guys on the block pouring beer just couldn’t be beat — and the music and food are stellar, too. Last year there were 30 craft brewers on hand from in and around Boulder County and it’s sold out every year. I’m just sayin….

The 7th Annual Denver International Beer Competition was held April 2 and 3 at the Omni Interlocken Hotel in Broomfield and among the 285 entrants from around the country and the world that won medals were some of our hometown brewers.