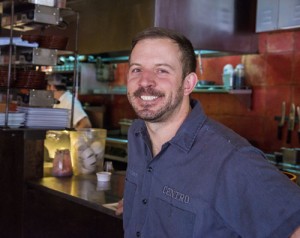 “I stopped watching it after they snubbed me the first time I interviewed,” Coburn said about his first attempt at getting on the popular cooking show. “Once you’re accepted, they fly you out to New York for a two-day shoot.”

And when it comes to prepping for being on Chopped, the 32-year-old chef at  in Boulder said he’ll probably look for help from hungry friends.

“I’ll have friends present me with mystery baskets and that’s going to be our dinner for the night,” Coburn said. “That’s about as much as I can prepare. It’s an interesting opportunity and I could win $10,000.”

The gist of the competition is that four chefs are placed in a kitchen with all the basic ingredients you could want as well as all the hardware, tools and toys imaginable. Then the chefs get a different mystery basket for each of three courses with a random assortment of ingredients that they must incorporate into an appetizer, main course and dessert in a fixed amount of time, usually 20 or 30 minutes.

“I think it’s a fun show; I like the realness of it,” Coburn said. “Having the timeline and the mystery basket… there’s not a lot you can fake in that.”

And whether he wins or not, Coburn has his plate full. Centro closed during lunch for two years while the former Daily Camera building next door was reduced to a hole in the ground and rebuilt as shops and offices. Now, with construction moving indoors for the finish work, excitement is palpable as a fresh, new lunch menu is taking shape as well as a breakfast offering.

“We’re doing $5 grab-and-go chorizo breakfast burritos from 7:30 a.m. until we run out,” Coburn said. “It’s about getting people excited about Centro and introducing them to the restaurant.”

Coburn has put together a nearly exclusive menu for lunch with the only overlap from the dinner menu being the popular tacos. “They’re what we’re known for, but for lunch we offer traditional Mexican sandwiches with our own take on them and salads that no one else is doing. The focus is authenticity with a twist,” Coburn says. “Focusing on salads and sandwiches, you get more of an opportunity to highlight fresh ingredients, as opposed to most Mexican foods which feature slow cooking.”

With summer around the corner, the Colorado native is looking forward to the arrival of fresh produce from the Boulder and Longmont Farmers Markets — tomatoes, asparagus, peas, corn, radishes and ramps — that will get incorporated into feature dishes as much as possible.

Coburn will also be heading to Mexico in late April on a food pilgrimage to Mexico City, Puebla and the Yucatan. Look for a running blog of his adventures (and recipes) while he’s there. And if you want to get a taste of what he discovers during his pilgrimage, Coburn will be putting on a chef’s dinner when he returns. Look for information about dates and menus at centrolatinkitchen.com .