Faces of Summer: Taking Arts into the Open 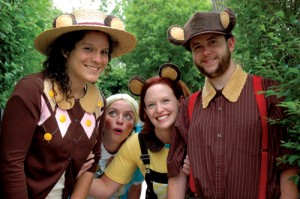 The lights go down. There’s a hush over the crowd. The music starts up. A show is about to begin. The magic of live theater is almost always an exciting time, but when you attend a show by Arts in the Open, it’s a totally different experience.

Instead of the lights dimming and the orchestra striking its first note, you’ll find hikers traveling from location to location, enjoying a live scene at each stop. There are no big lighting grids, no red velvet curtains and no huge orchestra. Instead, you get the scenic beauty of Boulder’s Chautauqua Park and the natural lighting of the bright sunshine in Colorado.

You may remember Arts in the Open as Theatre-Hikes Colorado, which started in the Boulder area six years ago. Founder Kimberly Boulton brought the idea from Chicago, which involved combining family friendly shows with hiking trails to create a one-of-a-kind theatrical experience. “(She) had worked for Theatre-Hikes out in Chicago and brought the idea here when she moved back,” says Matt Davis, Artistic Director for Arts in the Open. “Being from here, she knew that Colorado was the perfect place for us. The rich arts scene with Coloradan’s love of hiking made it sort of a no-brainer.”

Theatre-Hikes enjoyed a strong following in Boulder County over the past six years, but now the company has changed names and re-branded as Arts in the Open. “As the artistic director and a teacher, I wanted to focus on providing shows to all types of children and adults and educating on Leave No Trace and conservation because of the trails and outdoor areas that we have here,” Davis explains. “Chicago doesn’t have the same outdoor spaces as we do, so they were not focusing on the same kind of things. We were also missing out on some Colorado specific advantages because, technically, we were an Illinois based nonprofit.”

Now, the freshly-named Arts in the Open ready for another fantastic season at Chautauqua Park. You can expect great theater for the whole family, starting with a new adaptation of Goldilocks by Patti Murtha and a totally unique choose-your-own-adventure style play by Joaquin Aviña, “(he) is writing The Treasures of Toothless Jack: A Pick a Path Play. He is setting up the show like those Choose Your Own Adventure books. The audience will actually get to vote at certain times throughout the show on what the characters will do and even which trail they will take! I am directing this one and I am really excited about it.”

Arts in the Open is the perfect way to take advantage of the beautiful state you call home. If you aren’t a hiker, don’t worry as it’s designed for nearly everyone. “We list the hike as moderate just because it is uphill for a part of the way. However, the hike leaders are great about taking their time and making sure everyone can go at the pace they are moving. The trail that we are on for the summer is very clear on the first half, but is rocky and a little more challenging on the second. Children do great on the hikes. It is nice that they stop every so often and watch a scene so it ends up being just right. We have had kids of all ages from newborn to teens that were all just fine. Two years ago we actually had a couple that took our two-mile summer hike to celebrate their 92nd birthdays! So anyone can do it.”

Arts in the Open: What to know before you go: