Faces of Summer: Getting Artsy with Planet Bluegrass 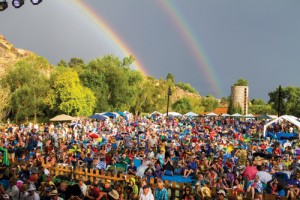 “If you build it, they will come” should be the motto for the 43-year-old Planet Bluegrass. As popular music styles continue to change and surpass older traditions, bluegrass is here to stay, especially in Colorado. “Colorado is full of strong bluegrass supporters,” offers Craig Ferguson, president of Planet Bluegrass. “The artists love to come here. The state is really behind bluegrass… maybe it’s a circular thing, we help promote bluegrass and because bluegrass is big, it helps to promote us.”

Planet Bluegrass is basically the face of the music style in Colorado. There are three huge annual festivals as part of it — Telluride Bluegrass, RockyGrass and The Folks Festival. In addition to the three festivals, Planet Bluegrass sponsors two schools that take place during the festival season — RockyGrass Academy and The Song School.

Summer is always the unofficial start to bluegrass season in Colorado. “People love to sit around a campfire all night long and play until three in the morning,” Ferguson explains. “And it’s amazing in Colorado. Boulder and primarily Nederland have been the center of the bluegrass universe for quite a long time. Bands like Hot Rize or Yonder Mountain String Band are some of the biggest bluegrass bands and now even more are playing big venues like Red Rocks and selling out.”

It’s further proof that bluegrass isn’t just for your parents or grandparents either. “15 years ago, our classes were a bunch of 30-somethings. Now at least a half-dozen of those people are in their 20s. We see it all the time, as more young people are seeing the music, enjoying it and creating their own versions of it thanks to the freedom within the genre.”

In the years that Ferguson has watched Planted Bluegrass progress, he’s noted how the music itself continues to morph as well. “The music just continues to evolve. You no longer have to have a hit on the radio to be a successful touring musician. You can find your audiences through all the social media and communication that happens so fast… Telluride Bluegrass was the first place to hire Mumford and Sons and in the last 20 years I’ve noticed how much new music there is, and it carries over into bluegrass. People can find their own sound and it’s constantly changing. There’s even a lot of classical music being performed in bluegrass. The music can get really sophisticated.”

If you’re not sure what to expect at the big summer bluegrass festivals, Ferguson has a couple of suggestions. “RockyGrass, for us, is like old home week. It’s great to see all our old friends celebrating the genre and it’s really impressive. Plus, RockyGrass seems to be where progressive and tradition meet. You get to see artists of all types come together to play and we see the art in its highest form.” However, if you’re looking for something more low-key and relaxed, then the Folks Festival may be the best option for you. “Folks Festival is where people from all over the world come together for poetry and introspection in addition to the music. It’s more family friendly, a little quieter and more gentle. It’s our artsy thing.”