Spotlight On: The Motet 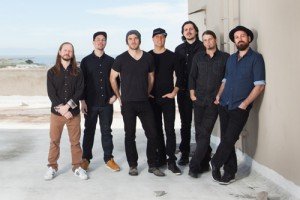 Drummer Dave Watts and The Motet’s blend of afrobeat, jazz and straight-up funk has been a mainstay in the Centennial State for almost two full decades now. In such a jam-friendly scene, it’s no wonder — The Motet has a sick groove from downbeat to the ring of the last note, and they’ve only gotten tighter over the years. So much so, that the departure of former lead singer Jans Ingber late last year didn’t cause much of a ripple — new singer Lyle Divinsky fit right in, helping the band wrap up their seventh outing, Totem, produced by Eric Krasno (Lettuce/Soullive), dropping on July 8. Here, Watts talks about jamming for 18 years, playing with Krasno, and why Boulder kicks so much ass.

French Davis: Your band is officially old enough to vote now — what’s the secret to 18 years of longevity?

Dave Watts: Flexibility! We’ve always had the ability to change with the times, whether that means musically or working with various personnel changes.  As an artist it’s always important to reinvent yourself when your circumstances call for it.

FD: You’ve talked in the past about how collaboratively you approach composition. With the departure of (lead singer) Jans Ingber and the arrival of replacement Lyle Divinsky, how has that impacted the creative process?

DW: The fact that Lyle was able to step in and immerse himself in our creative process was really the deciding factor in his joining the band.  He contributed a ton to the songs on our new album. I recall sending him a track we had been working on for about eight months and we were thinking about tossing it into the trash. In three days he wrote and recorded all of the vocals for it and now that song is the first track on our new album. I’d say that is pretty good proof that he’s our guy!

FD: How did that process manifest itself in this album? What sets this one apart from your previous outings?

DW: We get together and just throw ideas at each other and let it grow organically from there. We really only need a spark of an idea for it to build into something we’re really excited about playing. We try and write great songs because we want to play great songs. We’re a live band first and foremost, so the process of writing stems out of our desire to be as good of as a band as some of our favorite artists: Stevie Wonder, Prince, Michael Jackson, Tower of Power, Jamiroquai… the list goes on and on.

FD: What did producer Eric Krasno bring to the table? How do you think his participation influenced the final product?

DW: Not only did Kras produce the album, but he also wrote two songs for it and even played some guitar. Eric has an amazing ear for good songwriting, arrangements, and vocal melodies. Because we didn’t have the songs completed when we went into the studio, we needed someone in the control room directing traffic and keeping us on course. He was able to objectively listen to the tunes as we were recording and make some crucial changes to the forms and grooves. He’s basically an all-around badass.

FD: Talk about your Boulder roots and the scene here in general — how that influenced what you are as a musician and together as a group today.

DW: I moved to Boulder in the mid-’90s from Boston because I knew I could find my musical community here. I found that the musicians in the Colorado scene were more interested in simply playing music than the bottom line of getting paid like they were back east. Now Denver has become this incredible hub of music that is recognized from coast to coast. Almost our entire band has moved here from the east coast because it’s so musically fertile and supportive.  We wouldn’t be the band we are today if it weren’t for the love we get from our Colorado family.

The Motet plays Red Rocks on July 22 with Medeski, Martin and Wood. Tickets start at $39.95, www.themotet.com for more information.