The Boulder Running Group that Could 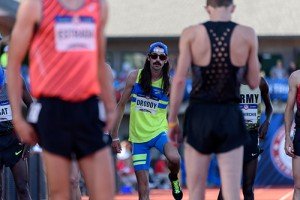 With his long black hair, thick mustache, backwards hat and sunglasses, Boulder resident Noah Droddy looked like he would’ve easily fit in at a heavy metal concert, a yoga meditation retreat or riding on a dirt road in the back of a pickup truck. But on the track at the U.S. Olympic Trials for the men’s 10,000-meter race, beside his clean-cut colleagues clad in sponsor’s’ logos, Droddy stood out.

The trials aired live in July, and Twitter went aflutter for Droddy’s unusual style, with people calling him “the most American athlete to ever live.” Then, Runner’s World ran an article about him, and weeks later, people still recognize him on the street or at his job at Fleet Feet, the Boulder shoe store.

“People seemed to have found some kind of resonance in my story,” Droddy said. “Something about me reminds them of themselves or someone that they know. When people recognize me, we end up talking about them more than we talk about me. It’s fun.”

But Droddy’s story is not a common one. A year ago, when he decided to pursue running, he was rejected from or ignored by running groups from all over the country. “I was ready to take a chance on anyone who would take a chance on me,” he said. That person was Doctor Richard Hansen, who had just started Roots Running Project together with his trainee and fiancée Alia Gray.

“God knows Noah didn’t have the fastest times coming in,” Hansen said. But when he looked at Droddy’s history, he saw potential. “Noah ran his 10K personal record in the [NCAA] Division III National Championship. That’s a tactical race.” Meaning that athletes race the field, rather than try to set a record. “For him to improve his time as much as he did in a tactical race says something. We knew his upside was going to be huge,” Hansen explained.

And boy, was he right.

In nine months of training with Roots, Droddy’s 10K time went from 29:40 to 28:22, a remarkable improvement in such a short timeframe and an achievement that qualified him for the Olympic Trials. Clearly, the fund-less running group and its new long-haired member hit on the right formula.

A key ingredient of this formula is a partnership with legendary track coach Joe Vigil, a former Olympic team coach who agreed to take Alia Gray on when she left her old running group. The 86-year-old Vigil, who lives in Arizona, faxes Gray her training program every week with motivational messages handwritten at the top of the page. His training philosophy is known for being intense — even by Olympic standards — calling for strength, speed, agility and other workouts throughout the season with increased intensity, as opposed to breaking up the season into phases focused on a separate aspect of training.

“A lot of people look at it on paper and feel intimidated,” Gray said, admitting that she felt intimidated too, yet she “discovered a new level of hard work” with Vigil. In the past year, Gray set personal records in the 5K and 10K, qualifying for the Olympics Trials in the 10,000-meter race. She had to bow out of the Trials due to injury.

The grueling training regimen comes with an emphasis on rest, with mandatory daily naps. “I always tell people I have two days every day,” explained Droddy. “I have my morning when I train, and I have the afternoon, when I work. And between those two days there is a lot of sleeping.”

Hansen attributes some of the group’s success to meticulous tracking of biometrics. “He takes my resting heart rate every morning. That’s the first thing we do,” Gray said. “It’s really romantic,” she added. The athletes have regular lab work to measure their levels of iron and other components, and they track their stress levels. These metrics help them make sense of bad workouts and avoid overtraining. And, of course, the fact that Hansen is a chiropractor doesn’t hurt.

Hansen’s view on nutrition is unusual in the running world. “A lot of runners are worried about gaining weight because of that old concept that lighter is faster. We have the opposite philosophy. They’re training so hard at such intensity. We need them to eat a lot.” Hansen said that although they generally eat a healthy, balanced diet, “bacon and donuts are staples within our diets.”

The group is unabashedly non-mainstream. “Running culture can be a little candy pop,” said Hansen. “A lot of bright colors, really flashy. A lot of cheesy marketing campaigns. We’re not looking for that runner in a box that fits into what that marketing campaign is trying to promote. We’re not about to put out a gluten-free muffin recipe for the recreational runner who wants to emulate a professional.”

Hansen and Gray collect vinyl records and love craft beer. They go to shows often. Wherever they travel, they always buy locally roasted coffee beans. Gray works as freelance writer. “We’re runners at heart,” she said. “It’s what structures our lives. It’s how we’re building our future. But it doesn’t totally define us.”