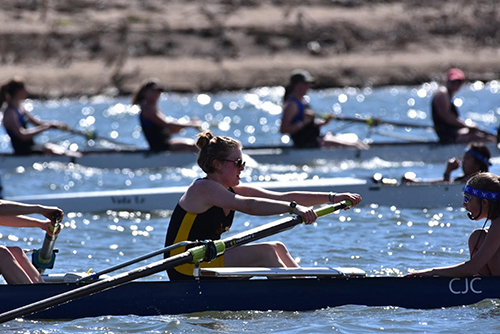 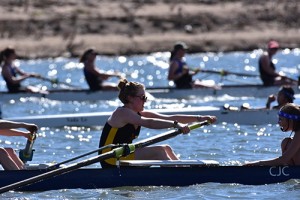 The Boulder Reservoir supplies the water to the cities, but it also nourishes dreams big and small.

In the morning, the reservoir’s glassy face mirrors the blue gray sky, and reed-thin boats razor through the surface, as light and fast as water bugs on the surface of a pond, propelled faster and faster by six or eight spindly limb-like oars, each limb pulled — in synchronous union — by a smallish person with their backs to the wind, sending circling ripples that die before they reach the tranquil bay.

e.e. cummings would’ve been a great sculler; T.S. Eliot a great coxswain; because watching the Colorado Junior Crew team practice makes you want to wax poetic. If you wanted calm in your life, you could skip yoga and zen meditation and watch the spears of boats slide past on watery wings.

There are a lot of dreams being dreamt in the Colorado Junior Crew ranks; dreams of standing out nationally and fitting in locally. The flashiest dreams come in the persons of Saylor Strugar, Matthew Toles and Zander Maitland, all 17. They made the trip to the 2016 US Rowing Youth National Championships this summer, the first kids from the team to do so, and rowed against 200 teams from across the U.S. The weather messed with them and they weren’t fast enough to make the finals, but, still, they made it all the way to nationals, which is quite a feat.

Is it any wonder that Colorado Junior Crew — coached by seasoned rowers Lisa Dirth, Tyler Romero, Peter Graca and Nikolas Huebler — is growing fast, from 20 kids when it started in 2007 to 56 today — 33 females and 23 males? Or that the kids come from 20 different middle and high schools from Boulder, St. Vrain and Jeffco districts?

So, yes, many of the kids are dreaming big dreams, such as getting a college scholarship, especially if they’re girls, because of Title IX. Some of the smaller dreams, though, resonate more deeply. On a poetic level, anyway. 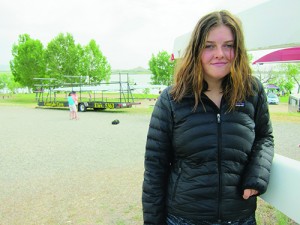 There is a girl on the team named Hannah Coe. She is 14 and very good in school and has great taste in music and a good eye for photography and is a whiz with a video camera and an editing machine — check out her YouTube videos on her channel, hannahcoee. But! Somehow that’s not enough. There’s a lot of pressure in 2016 for young people to be perfect all round and part of being the perfect is excelling at sports.

And Hannah really wanted to be an athletic person, and she wasn’t, not exactly. Hannah tried soccer and swimming and basketball but they were all Procrustean bungles, because none of the sports fit her, or she didn’t fit them, she was always too tall or too short or too awkward, like in basketball she fumbled the ball and tripped over her shoes, and it was frustrating not to fit, especially in basketball and soccer, because if the other kids don’t wanna pass it to you they don’t have to, and if you’re a 13-year-old who who’s not getting passed the basketball it can feel more alone than being a castaway on a desert island or a solo North Pole explorer whose Huskies have croaked.

But then she found crew. And crew she’s just the right size for. “I feel like so many of the kids here are like that, they didn’t fit into a sport,” Hannah says. In crew, these kids, true athletes and mere enthusiasts, seasoned scullers and absolutely novices, are literally all in the same boat, rowing in time, toward the same goal.

Crew has been good for Hannah’s confidence and it’s made her work harder in school so she can finish up quickly and get to crew practice.

“Being on a team is very powerful,” Hannah says.

She skims the water most mornings with her crew, dreaming her big dreams, feeling the burn, and hearing her own poetry in her head. She put some of it in a video about Colorado Junior Crew she posted on her YouTube channel. Her words are poetry, too: “All the excruciating pain is absolutely worth it, because you’re doing something you absolutely love, and you can’t see yourself doing anything else.”