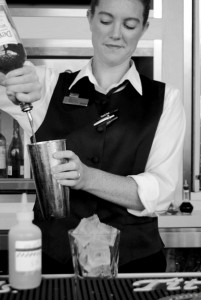 When it comes to craft beer, Colorado pretty much led the charge in defining and growing an industry that today is upsetting what was once the static and comfortable business of brewing mediocre beer for the masses.

And hot on the heels of the wildly successful craft beer craze is another trend that promises to be no less revolutionary: craft spirits.

Ten years ago, there were about 50 craft distilleries nationwide, according to Fortune Magazine. Today that number is close to 800 and growing, with 59 craft distillers calling Colorado home.

The rapid growth stems from increased demand (Millennials account for just over a third of the craft spirit sales in 2015, according to the American Distilling Institute) and a more educated and discerning consumer. And like craft brewing before it, craft distilling is seeing the same levels of innovation and quality in the new products hitting the market.

And in addition to seeking out complex and flavorful spirits of every stripe, the source of the raw ingredients has also come into play. It’s not enough to be a locally owned and operated distillery. Your barley, wheat, corn, rye and potatoes increasingly must be local, too, as well as the mixers, bitters and other adjuncts used by your local mixologists to construct those craft cocktails. 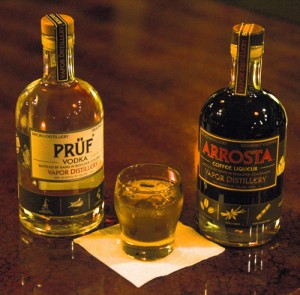 Though best known for their award-winning Ginskey gin and Pumpkin King cordial, Vapor Distillery (formerly Roundhouse) also makes a smooth, clean vodka called Prüf. When mixed with their mind-blowing Arrosta coffee liqueur (and, if you’re channeling The Dude, some half-and-half) Prüf produces a sublime black Russian. The heart and soul of the Arrosta is the organic, fair-trade, blind roasted (owner Gerry Leary is, in fact, blind), coffee from Boulder’s Unseen Bean. The coffee is ground with Madagascar Bourbon vanilla beans (because you just can’t grow those here) and cold-brewed, producing a rich and powerful, yet smooth, brew with just a touch of sweetness. By comparison, Kahlua tastes just like cloyingly sweet high-fructose corn syrup and instant coffee. The resulting Vapor Russians, both black and white, are strong and delicious. Just fight the urge to start your day with one. 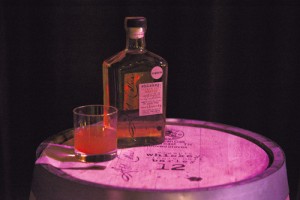 One of four distilleries to open in Longmont over the past three years, Still Cellars distinguishes itself with its strong sense of community — exhibited by the locally sourced live music and art you’ll find there — and hand-crafted, lightly filtered, certified organic spirits. Chief among the offerings is the 100 percent malted barley, unblended whiskey made by co-owner and distiller Jason Houston. With a nod toward an old style, single-malt Scotch, the Whiskey Barley is at the heart of Still Cellars’ Whiskey Bitter cocktail. Once distilled, the whiskey is aged in lightly toasted — not charred — oak barrels, which imparts a much lighter color and flavor to the end product. To this is added house crafted aperitivo bitters, (assembled by Houston’s partner, Sadye Rose W.) local honey, hand-squeezed lemon juice and a dash of smoked paprika. All this is shaken over ice and served, sans ice, in a simple rocks glass with a lemon twist garnish. The result is a deliciously complex cocktail that is at once smooth — thanks to the barley whiskey and honey — and tart — thanks to the lemon and bitters. And wafting about in there is the hint of smoke from the paprika, making for a sipping cocktail you’ll want to savor. 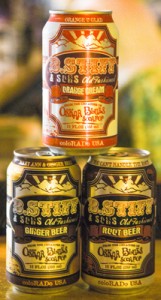 When Oskar Blues Brewing owner Dale Katechis does something, he goes big. It’s true for his beers, his coffee, pioneering craft beer in cans and now his growing line of sodas, in cans of course. He launched the B. Stiff and Sons root beer in 2012 and the rich, smooth flavor, sweetened with pure cane sugar (as is the case with all his sodas), was an immediate success. He’s since added four more flavors: cream, black cherry, orange cream and a potent (non-alcoholic) ginger beer. The ginger beer brings the rich flavor and subtle heat of fresh ginger, which, according to Geoff Hess (the chains, grains, trains and sugar cane guy at Oskar Blues), starts as a ginger tea. They add lime, a dash of pure cane sugar, carbonated water and some other proprietary spices and off to the canning line it goes. “We wanted to give it some heat, but it’s a fine line between just right and too much,” Hess said. Vapor Distillery used the ginger beer in several of its cocktails, as well as the orange cream and black cherry cream sodas. The ginger beer is also a favorite mixer at Spring 44 Distilling in Loveland, which they combine with their vodka in making a bright and refreshing Cucumber Mule. The cocktail is a big favorite among tasting room patrons, so much so that Hess said that Oskar Blues is talking with Spring 44 about putting the cucumber mule in cans. Stay tuned. 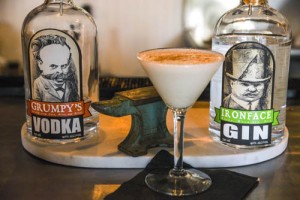 Because liquor laws prevent distilleries from serving any alcohol not produced on the premises, tasting rooms have to get creative if they want to offer anything other than bare-bones cocktails. For most, that means using their clear liquors (vodkas and gins) to create infusions. And among the best at this is Anvil Distillery in Longmont. Owner and distiller Peter Grundy has armed his tasting room with a variety of infusions — including basil, jalapeños, mint, ginger, blueberry and coffee, to name a few. “It’s a way to do interesting martinis,” Grundy said. Interesting is putting it mildly, but it is with the seemingly mundane where Anvil’s martinis shine. The “Putin Blanc” (aka white Russian) is a mix of vodka with vanilla, coffee, nutmeg and cinnamon infusions shaken over ice. The result is a most intense and authentic white Russian, made even more so with a splash of simple syrup to lend it some sweetness. The other tasting room favorite is the Iron Mule made with Anvil’s award-winning Ironface Gin and Reed’s Ginger Ale. The perfect combination of herbs and botanicals in the Ironface are brought to the nose and palate by the spicy sweet ginger brew, making for a deliciously refreshing cocktail.

Craft brewers are increasingly making beverages other than beer to serve in their taprooms, and with mixed results. In the case of Vindication Brewing’s non-alcoholic ginger beer, this is a good thing. With only Vindication’s Freedom Stout and American Bold Ale available on tap (Rosalee’s Pizzeria in Longmont and The Kitchen in Boulder) and in 22-ounce bombers and six-packs (at select liquor stores), it really is important to get to their taproom for a true sampling of their excellent beers. And for that designated driver, there is the special treat of the ginger ales, brewed with fresh ginger root, honey, white cane sugar, lemons and pineapple. The citrus and ginger lend the requisite bite, but the honey, cane sugar and pineapple round out ginger heat to make this deliciously refreshing. Add in some of the yeasty citrus flavors found in the Winchester Wheat and you have a house Shandy that can’t be beat… or found anywhere but the Vindication taproom. 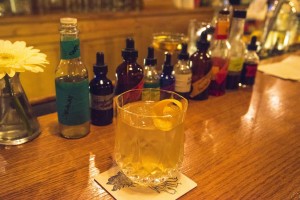 Erie’s best kept foodie secret, 24-Carrot Bistro, is celebrating its first lap around the sun. And what better way to do so than serve a toast from an updated and diverse cocktail menu that includes several house made sodas. The food at 24-Carrot has received well-deserved rave reviews, as one would expect given Chef Kevin Kidd’s resume that includes time behind the lines at Salt and Colterra Food and Wine. But the same delicious twist Kidd and partner Bianca Retzloff bring to the locally sourced entrees at 24-Carrot can be found in the fun and flavorful cocktails served there. The Stepdaughter, for example, doesn’t just settle for a run-of-the-mill basil-infused vodka. No, they use science to kick it up a notch by with a nitrogen infusion process that adds all of the hints of licorice and anise sweetness found in the Italian basil, but with none of the grassy chlorophyll that the alcohol can also extract. Other fine concoctions include a house cola, peach black tea and cherry limeade among others. And the cocktail menu also makes liberal use of several house made bitters and tinctures that subtly (or sometimes not) elevate the mundane to the exquisite.