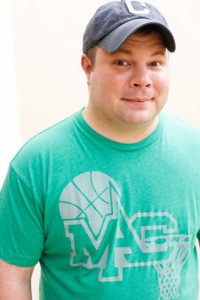 While you likely know him best from his regular slot as a “panelist” on E!’s Chelsea Lately, comedian John Caparulo is far more than just another Chelsea Handler foil. He’s logged countless hours on the road, touring with the likes of Ron White or Vince Vaughn’s Wild West Comedy Show, released a one-hour special on Comedy Central called Meet Cap, and his sophomore outing, Come Inside Me, debuted on Netflix in 2013. Here, John talks about failure, the art of the caveman and farting on the TSA.

French Davis: Let’s kick it off easy: Give us two truths and a lie.

FD: Sum up this election cycle with the most applicable song lyrics you can think of.

FD: I’m thinking about trying my hand at stand up. I feel like I have a shot, because I’m comfortable with failure (SO MUCH FAILURE). What advice can you offer me?

JC: Being comfortable with failure is one thing. Being happy about it is another. Always remember that your primary objective is not to suck. I mean, what if doctors took that same approach to their profession? Sure, they might be able to conduct a successful heart surgery, but they wouldn’t get ANY laughs!

FD: It’s already been three years since Come Inside Me. When’s the next special hitting the airwaves?

JC: Well “Caplets” [check it out at youtube.com/CaparuloCaplets —ed.] has kinda taken the place of another conventional special for now. I felt like churning out more material more frequently seemed to be a better approach for the time being. But my wife and I have been working really hard on producing my animated project, “Cartoon Comic,” for about two years. I’ve been writing scripts and developing the idea since 2014, but I’ve come to realize that animation is much easier to execute if you can draw. My personal artistic skill resembles that of hieroglyphics, if you consider that this particular caveman is working in the dark with maybe a broken arm.

FD: What would you do differently if you could do Come Inside Me over again?

JC: Well there was an audience member who stepped on one of my punchlines by yelling “Boo!” at the mention of Lebron James, even though my bit was very obviously of the same mindset. If he had only trusted me as a professional comic to decry Mr. James in a manner that was funnier than “Boo,” I felt like my set’s momentum would’a made that a much stronger moment. So I guess I would’a had that guy kidnapped before the show if I had to do it over again. I would also love the opportunity to make a better album cover than the one we used, but at the time I guess it made more sense to take the advice of my inept management on such matters. So I’d probably like to run that guy over with my car before the show if I had the chance. Oh, and I might wear a different hat as well.

FD: What do you love most about life in comedy?

JC: There’s nothing better than hearing an audience laugh with me about random thoughts and stories that pass through my mind. I’ve always said that comedy is better than sex for me, because I’m actually good at it.

FD: What do you hate about it?

JC: Travel. I love doing shows, especially in front of crowds like the ones in Denver. Comedy Works might actually be my favorite comedy club in America. But I really wish they could all just come to my house instead of me dragging my ass over there every time after it gets groped by TSA. I’ve tried to turn the negative into a positive though. After every one of those ridiculous pat-downs, I walk away thinking, “Sure, that guy might be on a power trip with his badge and his uniform and his dehumanizing electronics, but I farted on his hand.”

FD: Who are the comedians you love listening to the most? Who would you say influenced you as a performer the most?

JC: Probably Sam Kinison and Eddie Murphy were my biggest comedy heroes as a kid. I still love guys like Louis C.K., Chris Rock, Bill Burr, and Dave Chappelle. I love comedy that seems to come from deep inside the soul and is then purged for everyone to hear, regardless of any discomfort it might cause. That of course doesn’t apply to everybody. You also have to be funny while you’re making people uncomfortable. If you can talk about sensitive, personal subjects and make people laugh, you’re possibly a comedic genius. If you’re just making them uncomfortable, you’re just my dad.

FD: Which one of the things in question one was the lie?

JC: I’m gonna reveal a big surprise and reveal it was number three all along. I used to be proudly oblivious to politics and everything that goes along with that subject. I was young and dumb and too busy focusing on the things that mattered most to me then, such as me. I actually feel kinda guilty for promoting such obliviousness and apathy earlier in my career (such as the opening bit I did to lead off Vince Vaughn’s Wild West Comedy Show). I think that type of apathy has led us to such a bad situation in this 2016 election. Trump vs. Clinton is like trying to decide between AIDS and HIV. Both options lead to a pretty terrible place, but one of them might take the scenic route. So I apologize now a decade later as I see things much more clearly. So no, ignorance is not bliss when it comes to politics. And yes, Vince Vaughn is a douchebag.