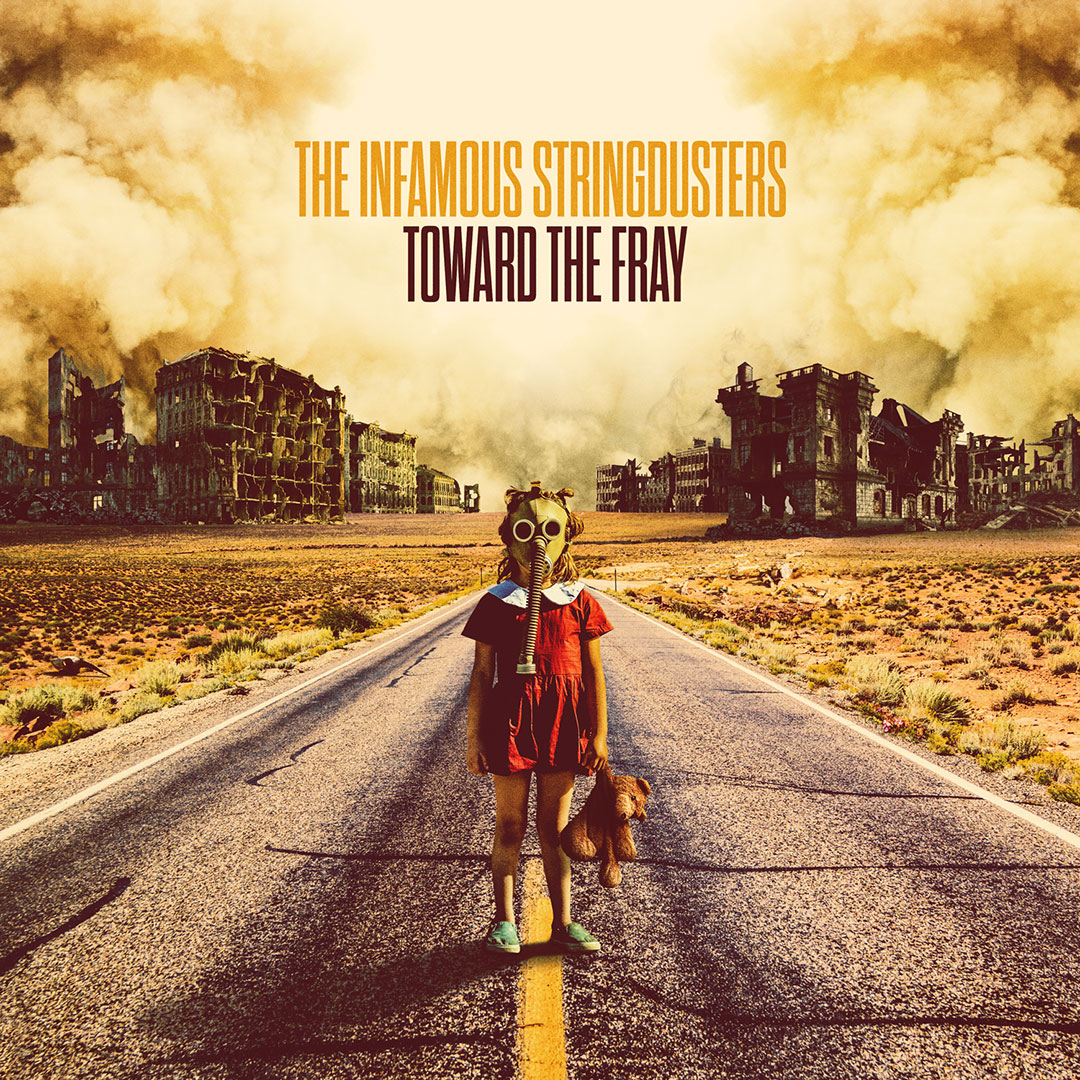 All images courtesy of The Infamous Stringdusters

Yellow Scene: Let’s start with the album title. What does “Toward the Fray” mean, how did you come up with it, and what’s the backstory?

Andy Hall: “Toward the Fray” is a song that Andy Falco wrote, and it encapsulated the idea of a lot of the album. It was written during the pandemic, and during the civil unrest and [Black Lives Matter / George Floyd] protests over the summer of 2020. Toward the Fray means essentially to turn toward the problems of the world, particularly social injustice, and to face these problems and deal with them. To help make people aware of the issues in the world and not shy away. It’s our way of attempting to be part of the solution.

YS: How do you feel the title song reflects the meaning you guys were trying to embody with the album?

AH: The song itself is like a ballad, and we’re known as more of a bluegrass pickin’ band. The song is very different from our usual style, which is more high energy. The lyrics really speak to the injustices going on in the world. And it speaks to a lot of the systemic racism that white or privileged Americans maybe didn’t really know about. It strays away from our usual musicianship and focuses on the words. There are a few other songs on the album that embody similar messages. Toward the fray is about facing these problems and addressing them personally. It’s kind of a battle cry, its all about facing the issues of the world. The album art also speaks to that, and we want to show that there is love and hope and we as a band want to address these issues.

YS: What were some of the challenges of creating the album during the pandemic and how did the band navigate them?

AH: We all contribute to writing the music. In the past we all would write songs separately and then get together to share our work. This year we didn’t have the ability to get together, really, so it was a lot of zoom meetings and sharing what we were working on virtually. It was challenging because this time we only had about two days to rehearse together before going in to record the album. Thankfully we have been playing together for so many years as a band that a lot of the music fell together relatively easily. We have developed a lot of tools to play together as a band and we share a bond musically that allowed us to be able to put our work together even without much time to rehearse together as a band.

YS: Did the shutdown, and closing of the venues, benefit the album creation in any way? Was there any kind of silver lining for the band?

AH: Sure! We’ve been a band a long time, and we have spent a lot of the last 16 years traveling and touring, so some time at home was welcome. How it came about was scary, and we probably wouldn’t have chosen to take a year off. However, a lot of the band members have families and kids at home. It allowed us all to take some time to rest and reflect and spend time with family that we never really had before.

AH: It is definitely a more intense vibe, and most of our records are about uplifting and positive emotions. The album is definitely a bit darker than our usual work in that way. We like to uplift people as a band, but this is the first time that we publicly wanted to display that we all go through dark times. We also wanted to show that there is hope, and there is a desire to face these issues individually, acknowledge them, and come together to address them. There are a lot of different vibes on the album, and our band is very diverse sonically and lyrically. Because we all write music, we are hoping to take the listener on a bit of a journey.

YS: What is your favorite song off the new album?

AH: That’s a tough one, the album is so new and a lot of times it changes over time. I think my favorite right now is called “I didn’t know.” It’s the only song on the album that has full drums. It’s got a different sound than the rest of the album and it has a powerful message lyrically. We also did a song called “When will I ride again.” It’s a sequel to a story song from our first record called “Tragic” so I think it’s really cool that nine records later we are continuing that story.

YS: Do all the band members tend to agree on their favorite songs to play or does it vary a lot?

We definitely don’t all agree on our favorite songs to play. We are a five piece band with a lot of different influences and backgrounds. People all have different preferences and things they’re into. Our band is very democratic, which can be a weakness because it can be hard to come to conclusions sometimes, but there’s also a huge strength to it because we balance each other out. All of those things can push and pull but it brings us together to create what is The Infamous Stringdusters. It helps us trust each other and learn how to disagree. 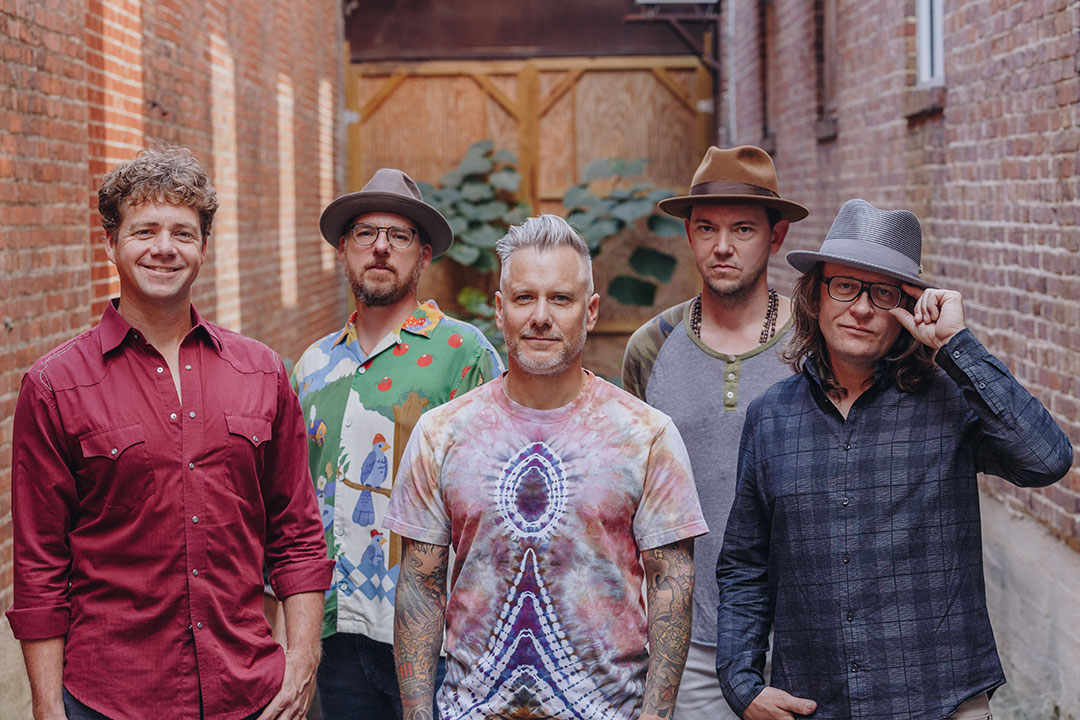 YS: Do you think the vision for your album was fully realized, or was there anything you wish you did differently?

AH: I think it was more than realized, I think it came together more than we thought it would. We don’t usually say in advance what the album will be like. Usually we bring together what everyone has come up with and the vision for the album kind of comes along with that. The theme, or vision naturally came from what everyone had been feeling and writing about at the time.

YS: What were some of the most memorable moments for the band during the creation of the album?

AH: Well, it was a very delicate time. We trod a bit more lightly because when we were able to get together to record it was the first time a lot of us had been traveling in six months or so. I think the most memorable thing was that we were all together, and were able to hang out and play music together after not seeing each other for months. It was kind of magical to come together and play music after so long. It showed us how much we missed that interaction and playing together and as musicians how much we need to play music.

YS: Can you tell us about the symbolism behind the album art? What does the little girl represent, and who is the artist?

AH: Add Noise Studios is a company here in Denver that we have used in the past. The main artist there – Mike Tallman – does some wonderful work and knows a lot about social justice so we felt he was the right person to create the cover. The burning city represents a lot of what was going on at the time in regards to the protests and political injustice. And the little girl represents an innocence lost. She is wearing a gas mask, which could be because of protests or because of COVID. It also shows how it was a lot for children to take on. I think the little girl also represents hope because the children are the people who are going to help us navigate the problems of the world going forward. But also she is standing there with strength. She’s not scared and she is looking on to face the world and face these problems to make a difference.

YS: Does the band have any surprises in the works for the upcoming shows?

AH: Yes! Fans will probably be hearing a couple of new tracks, and a couple of new covers we have been working on. We are also just really excited to be back performing. We will be coming to the stage with a lot of energy and we are hoping to dust off a couple of older songs to perform as well. I think that there will be something for everyone at the upcoming shows.

Finally, The Infamous Stringdusters have worked very hard on this new album, and hope to bring a little light – on a slightly darker album – to a world that has been difficult for many of us to navigate. Fans, like me, are excited to get deep with this beloved bluegrass quintet. They will be playing at the Mission Ballroom in Denver on Nov. 12th with The Sweet Lillies. Tickets can be purchased here.