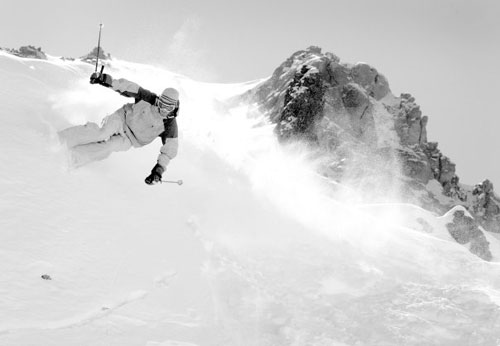 Let’s Move (Under Our Own Power) 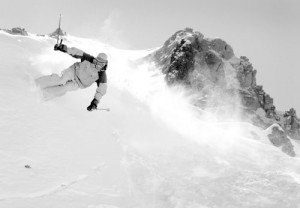 Reilly Capps on the slopes in freer days.

I am the outdoors and exercise columnist for Yellow Scene Magazine, but there’s not really that much to say about the subject, besides: you go outside, you move around for awhile, then you go back inside and have a drink.

Given that the natural state of most animals is movement — with the obvious exception of sloths, queen bees and retail employees making hourly wages — there’s probably more to say about how we all stopped moving so much.

It probably started with Egyptian pharaohs who figured out how to get slaves to carry them on their shoulders. Then it was a slippery slope. You used to have to get up to change the channel. Now you don’t have to leave the bed to hire a maid.

I went skiing with my nieces today, and I am very sore, but let me tell you why. I drove from Boulder to Breck. Then, from the parking lot, we took two buses to get to the lift. That was a first for me: having to transfer buses from the lot to the lift, like we weren’t going skiing, we were trying to get to Queens from Hoboken. I’m not trying to grouse; there was snow falling outside the bus on evergreens. But, still: a transfer?

Then we got to the lift. At Breckenridge there is a chairlift configuration, never before seen, which lets you move your body even less than you did before. After you shuffle through the rope maze, you stand at a mechanical gate, like a steer at the National Rodeo, and when the gates open you moo like a cow and muddle forward not onto snow but onto a moving sidewalk, which is supposed to guide you effortlessly to the place where a chair whisks you heavenward, but on which my mom — who has been skiing for five decades — panicked like a rat in some kind of crazy experiment and bailed off to the side, shutting down the entire contraption.

Once on the lift, at the top, the lift dumped us off on terrain so flat that you had to push with your poles to make your way down it, as though the Vail company had taken perfectly undulating Colorado mountains and plowed them flat to make more money from the Texas tourists. This is supposed to make it so that no one falls, ever, which is admirable insofar as it will reduce our collective insurance premiums, but the only exercise we got was poling ourselves downward. Then it was back on the buses, in the cars, on the road. 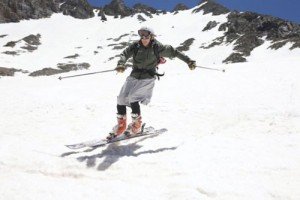 Reilly enjoys the range of motion from his baggies.

In other words, our Fitbits cataloged us as having moved long distances, ascended tall mountains and weaved through hill and dale, but I can’t remember moving my feet more than a few feet apart more than once or twice. Our bodies ended up different places, but if I’m tired at the end of the day, it’s out of the stress of all the buses, not the skiing. Meanwhile, outside the backyard is a hill covered with snow.

What I’m saying here is that extraordinarily large amounts of money and time were invested in an outdoor activity as a way to get us to move less, not more.

All of this is how it is increasingly possible to be an active participant in several sports — golf, skiing, hunting — and still be wildly out of shape, because of all the automatic conveyances like carts and four wheelers that shuffle your body from hole to hole, duck blind to duck blind.

I’ve said this before but it’s worth saying again: if we’re going to be healthier in the future we’re going to want to drop a lot of the things that right now seem like blessings.

It’s hard to give up something your ancestors fought so hard for. We studied hard to build internal combustion. Just like we worked hard to invent vaccines, cell phones, GPS, Spanx, sleep masks, and Band-Aids. But at some point we gotta say, “No.”

I’m not trying to be a Luddite. I don’t want to smash all machines. But when you’re more sore from riding the bus than from the athletic event, it a sign that it’s time to cut down on powered conveyances, and move your legs a little more.