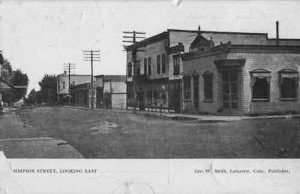 Memory Delforge was born in Boulder County in 1941. She’s lived in the area her entire life, having seen her small town of Louisville, Colorado grow from roughly 1,200 people to nearly 20,000 today, somehow managing to retain the small town atmosphere. “There are people outside on the sidewalks and everyone uses our parks,” Delforge said. “When I was a kid, if some lady didn’t hang her laundry on Monday morning, the neighbor women would make sure she wasn’t ill. They would stop in to see if they could make dinner for her or to watch her children. That’s just how Louisville has always been. It was just that kind of community.”

Delforge and her husband were married in 1964, raising two children in a small part of Louisville that was expanded in the late 1950s to a whopping 15 houses. Then, in 1973, they purchased a home in Niwot on a half-acre of land. Her dream home. The price at the time was under $50,000 as Delforge recalled. “The last time I saw it sell — which is now the third owner since we left in 1998 — it sold for over $850,000.” The growth is certainly obvious, but the one constant is, and has been, the family-friendly, small-town atmosphere that so many residents continue with pride.

Most of the area now known as Erie, Lafayette and Louisville began in the late 1800s as mining communities. The mines were the primary source of employment for much of the towns’ populations, despite being a dangerous and often deadly occupation. The Welch Mine was one of the first in the area, dating back to 1877, which eventually led to the incorporation of the town of Louisville in 1882. “The community was a mining community when I grew up here,” Delforge said. “Coal miners in Frederick, Dacono, Firestone, Lafayette. It’s all coal mining country.”

Delforge said most miners were immigrants who walked to the mines before the light of day and left after sunset. “The mother started her coal stoves early in the morning to feed her family and heated her water on the coal stove to do laundry,” she said. “Then she spent the rest of the day keeping things clean, preparing meals and making all the clothes her children wore. We were a poor community, but we didn’t know it. Everyone here lived in the same economic situation.” Delforge recalled the hand-me-downs form siblings, helping out in the garden and canning to prepare for winter.

It’s easy to look back on those days with rose-colored glasses. But those times were often filled with hard work and far less convenience that so many take for granted today. Yet in some ways life in the 1950s seemed less complicated, Delforge said. “Our parents didn’t worry about where we were or traffic or people they didn’t know. Everyone knew one another.”

Nannette Iatesta has similar memories of growing up among coal miners in Lafayette. “They were an unusual lot – soft and tenderhearted towards children, but they cussed a blue streak,” she said. “It was just the language they used and some of it was very creative.” As a volunteer at the Lafayette Historical Museum, Iatesta tells stories of the coal mining way of life to visitors every day, sharing her knowledge of the area as both a former teacher and museum volunteer. “Someone told me that the reason they had such a good sense of humor was that when they were underground it was like a brotherhood. They watched out for each other.”

Iatesta has fond memories of East Simpson Street in Old Town Lafayette. The four-block stretch of what was once downtown may have suffered some large fires over the years and has dealt with a lot of growth. “Robert’s Grocery was up the street. We knew every clerk and they knew you. You could go to the butcher shop to see Roy, but his nickname was Ham. You’d go to Ham and get four or five slices of bologna and he’d slice it up, pack it in paper and you’d take it home fresh.”

Today, East Simpson Coffee Company stands proudly in what used to be Charles Scholes Bakery and Grocery at 414 East Simpson Street. Where you could once buy penny candies and soaps you can now get lattes and espressos, but the history and the communal feeling of the location is still just as strong, thanks to the strength of its residents. 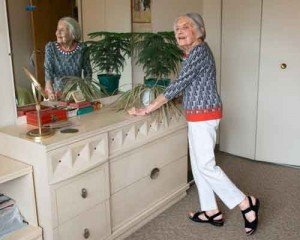 The warmth of community spreads from Lafayette and Erie into Longmont and Boulder, though the populations of Louisville, Erie and Lafayette combined still don’t reach the numbers in Boulder, with more than 97,000 people. The cities of Longmont and Boulder may be much larger in scale, but the community there is just as strong, which may be why the city receives so many high rankings in terms of quality of life, art and education.

Elizabeth Mekkelsen, for example, still lives in Boulder today, having recently celebrated her 102nd birthday. As a resident at the Golden West Senior Living Facility, she has ample access to the campus at the University of Colorado, where she audited classes. “I was going to classes there until my 100th birthday. I figured that was eventually time to stop,” Mekkelsen said.

When asked about what aspects of life are most important for a Boulder resident, Mekkelsen immediately praised the school district in Boulder. “Schools today in Boulder are certainly different than when I grew up,” she said. Having spent more than 40 years teaching in Colorado. “I was born on a farm and the school we went to was about a mile away. My sister was older than me and I wanted to see what school was like, so my parents asked if I could go with my sister and the teacher said that I could, as long as I behaved myself. So we walked that mile to school and I was just five years old, but I fell in love with school, and I went every day.”  The main difference today, Mekkelsen said, is training. “Back then, they didn’t have much training. They (the teachers) were just naturally nice people who liked kids. And they didn’t have a lot of education. They didn’t read thousands of books on psychology like we do now. We just did what was natural back then.”

As small as the towns in the area may have been, there was more diversity within the communities than one might expect. “There was a Latino church across the street, I think it’s still the longest operating church in town,” Iatesta said. “I remember walking down the street as a kid listening to the tambourines and the beautiful, uplifting music. And you had the Methodists a street over, then the Catholics and the Baptists and even some Buddhists. The miners in the area were mostly from Eastern Europe, so we had a little bit of everything. And they all made fun of each other’s backgrounds but they dearly loved each other.”

One of Iatesta’s favorite memories involved a Latino family that lived next door to her as she was growing up. The adult son, in his 40s or so at the time, had an unorthodox holiday tradition. “Every Christmas they would come over and have a few drinks and they’d bring a turkey and a gift for me. Then after a drink or two he’d propose to my mother. Every year. Both of them were single and he tried to convince her [to marry him] since he had a ’65 Chevy that could get to 100 miles an hour.” 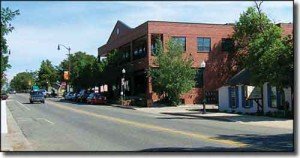 So what does the future hold for towns-turned-cities like Lafayette, Erie and Louisville? Iatesta said she has a good feeling about the influx of people. “They have a really good grasp of the past but they don’t want to just hang on to it, they want to honor it,” she said. “I think people are moving here to add their own roots and I’m really encouraged. I have moments when I relish the past and moments when I look out at the new people here, doing a great, great service to Lafayette.”

Delforge shared the positive assessment, praising the community involvement and work toward improving the area. “When I was younger there were no Parks and Recreation boards,” she said. “A group of us got together to plant seeds in a park and we all watered it in the evenings so our kids could have a ball field. You just did what you had to do.” And that might as well be the secret to carrying on in Boulder County for the foreseeable future. That same willingness to just do what you have to do, no matter the hard work or difficulty. That’s the lasting impact of a coal mining community. That’s the lasting impact of our grandparents and great-grandparents. That’s what makes Boulder County so special.